The drawdown of federal officers came on the 64th consecutive night of protests in Portland, a routine that began in the wake of George Floyd’s murder. 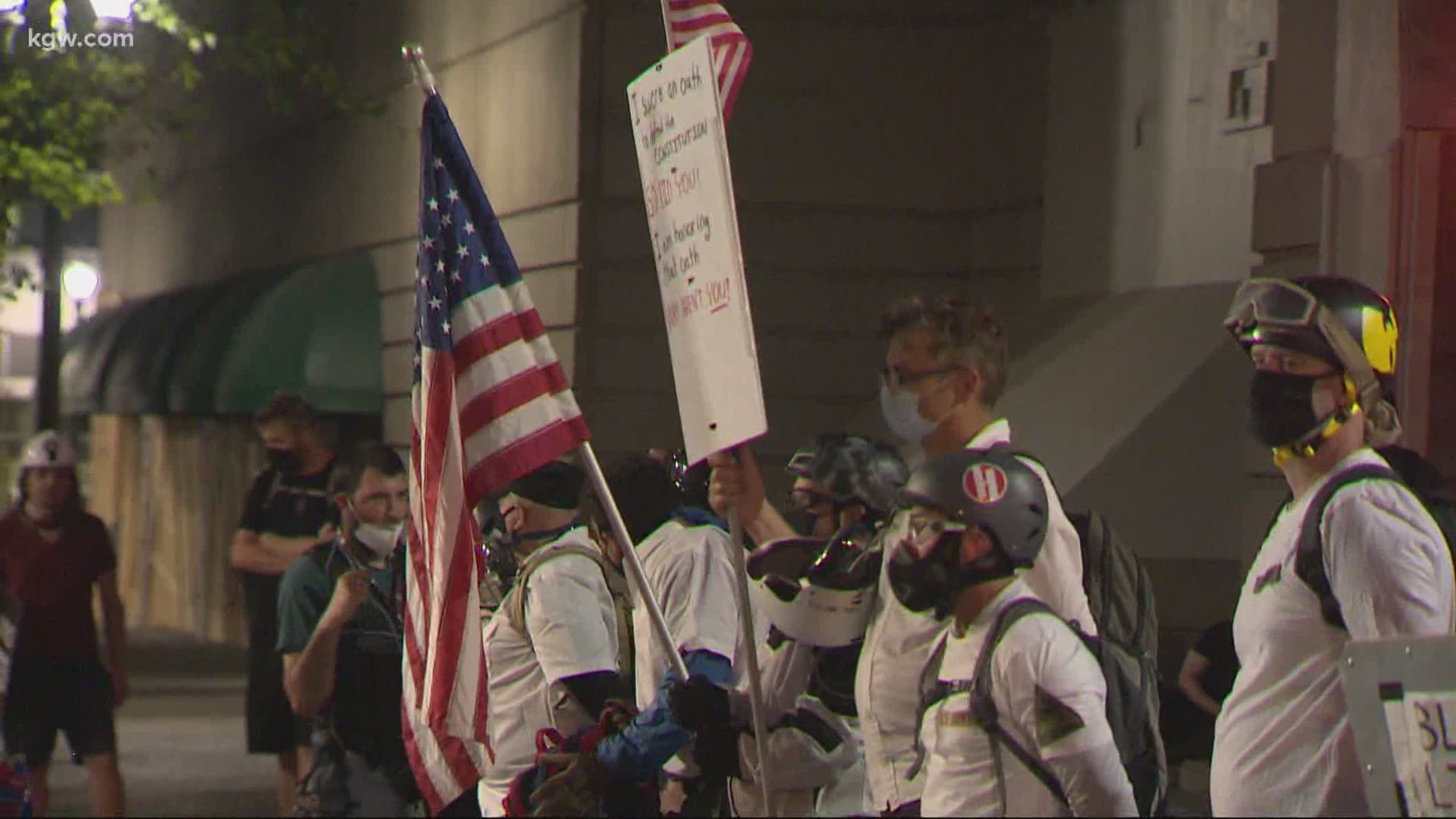 PORTLAND, Ore — A large group of protesters gathered in downtown Portland on Thursday night to support the Black Lives Matter movement. Those in the crowd said they wanted to refocus Portland's protests on eradicating systemic racism.

Around 9:20 p.m., the Wall of Moms and other demonstrators marched near the federal courthouse chanting "Black Lives Matter."

Demonstrators told KGW that they wanted things to remain peaceful Thursday night and hoped that with federal officers beginning to leave town they can get back to the causes that brought them here more than 60 days ago.

"My hope for tonight is a peaceful resolution," a protester named Mohamed said. "Obviously the feds leaving will eventually help the underlying issues a little bit, makes us feel a little bit more comfortable, lets us know that somebody is listening and that our voices are being heard."

Still loud & peaceful.#PortlandProtests are noticeably calmer tonight. We’ve seen a couple fireworks, blocks away. A small fire that someone set & others quickly put out. Those were outliers.

In a press release sent out at 2:15 a.m. Thursday, Portland police said the protests remained peaceful throughout the night and into the early morning hours, with a large group of protesters gathering outside the Justice Center and federal courthouse to listen to speeches.

Police said even when some demonstrators tried to do things like set fires or climb the fence at the federal courthouse, other protesters stopped them.

"At times people lit small fires along sidewalks on surrounding blocks and attempted to light fires inside the fence at the federal courthouse," Portland police said. "Others in the crowd put the fires out. Some people climbed on or near the fence at the federal courthouse, but others admonished them and they got down. People could be heard in the crowd repeating that the protest was to remain peaceful."

"It's time to move forward and make transformative changes," he wrote.

Thank you to all those who demonstrated peacefully last night as well as those who interceded to stop any attempts to light fires or throw projectiles. It’s time to move forward and make transformative changes.

For the first time in weeks, Customs and Border Protection agents and U.S. Marshals were not expected to be guarding Portland’s federal courthouse during protests Thursday.

KGW's crews headed out around 8 p.m. on Thursday night to try to spot OSP troopers out near the federal courthouse. The space behind the fence surrounding the courthouse was empty.

Black Lives Matter organizers said they feel this issue of the feds being in town has been a distraction from the movement.

A spokesman for Governor Kate Brown’s office confirmed the shift Thursday, saying it’s the result of a deal brokered with the Trump administration earlier this week.

"Governor Brown has made clear that her goal is to deescalate the nightly confrontations we have seen downtown since federal troops arrived in Portland,” said Deputy Communications Director Charles Boyle in an email Thursday. "Oregon State Police will focus on protecting free speech and protecting the public as they raise their voices peacefully to call for change.”

This is what partnership in Portland looks like. No violent activity against the courthouse last night. Stepping up and doing the right thing should not take 60 days. pic.twitter.com/0zVb07y0hL

The drawdown of federal officers came on the 64th consecutive night of protests in Portland, a routine that began in the wake of George Floyd’s murder.

On most nights, protesters have gathered around the Mark O. Hatfield U.S. Courthouse, the Multnomah County Justice Center and other government buildings. They routinely clashed with Portland police, who’ve said protesters set fires, launched fireworks and thrown objects at them.

A few weeks ago, more than a month into the demonstrations, President Donald Trump decided to deploy federal officers to the city, which Thursday he called "a beehive of terrorists."

The federal agents, many of whom are dressed in camouflage tactical gear, have taken to indiscriminately firing tear gas and "non-lethal" munitions into crowds, hospitalizing protesters and journalists alike.

READ: Journalist shot in the face with impact munition by federal agents during Portland protest

Portland Mayor Ted Wheeler has said multiple times the arrival of those officers made the protests, which were beginning to taper off, much worse.

"The federal officers are using CS gas broadly, indiscriminately and nightly," he said Thursday. "And that is why it is escalating the behavior we are seeing on the streets rather than de-escalating it, and that is why this must come to an end."

This week, it appeared Gov. Brown had reached a deal with White House officials to pull officers back, though acting Homeland Security Secretary Chad Wolf later said in a statement federal agents would remain "…until we are assured that the Hatfield Federal Courthouse and other federal properties will no longer be attacked."

Thursday, multiple officials confirmed to KGW federal officers would no longer be standing guard outside the federal courthouse.

Police also cleared camps from the park in front of the building, and crews began cleaning graffiti off of it.

Portland Police Bureau Chief Chuck Lovell said he hoped the swap from federal officers to OSP would have a calming effect, but he added he wasn’t sure what to expect.

"I don't know how many people are going to show up or the energy in the crowd or what the response is going to be,” he said.

Others said they worry it won’t make a difference.

"It's political now so it's just going to go on and on and on and on," said a man who simply identified himself as Neil. "And that's what's sad because, as a Black man, it's become less about Black people and about all the other bulls***."