President Biden was in Houston, where he spent time at the Harris Co. EOC, Houston Food Bank and NRG Park. 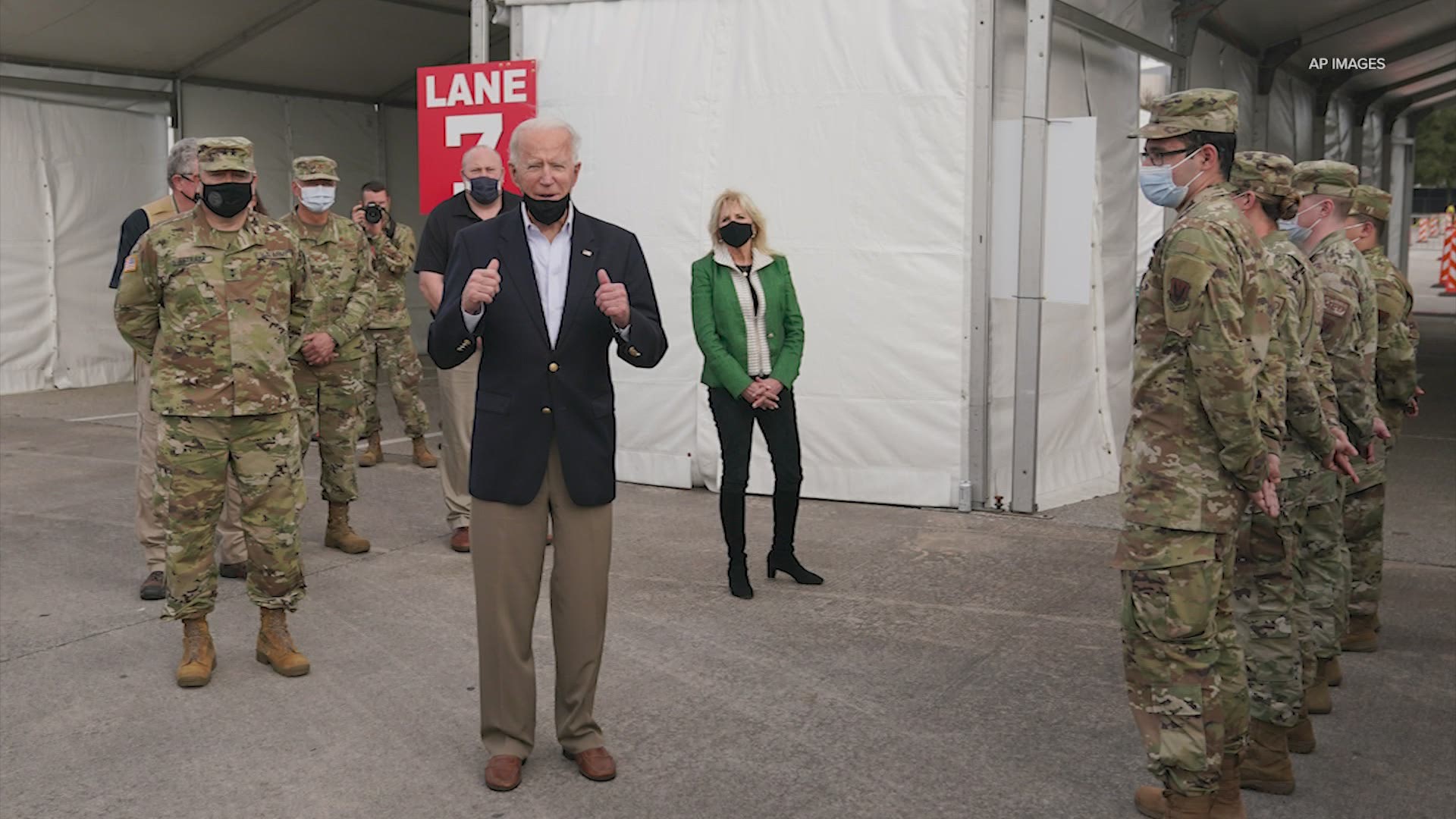 HOUSTON — President Joe Biden heard firsthand from Texans clobbered by this month's brutal winter weather on Friday and pledged to stick with them “for the long haul” as he made his first trip to a major disaster area since he took office.

Biden was briefed by emergency officials and thanked workers for doing “God's work.” He promised the federal government will be there for Texans as they try to recover, not just from the historic storm but also the public health and economic crisis caused by the coronavirus pandemic.

“When a crisis hits our states, like the one that hit Texas, it’s not a Republican or Democrat that’s hurting," Biden said. “It's our fellow Americans that are hurting and it's out job to help everyone in need."

With tens of thousands of Houston area residents without safe water, local officials told Biden that many are still struggling. While he was briefed, first lady Jill Biden joined an assembly line of volunteers packing boxes of quick oats, juice, and other food at the Houston Food Bank, where he arrived later.

At least 40 people in Texas died as a result of the storm and, although the weather has returned to more normal temperatures, more than 1 million residents are still under orders to boil water before drinking it.

“The president has made very clear to us that in crises like this, it is our duty to organize prompt and competent federal support to American citizens, and we have to ensure that bureaucracy and politics do not stand in the way,” said Homeland Security Adviser Liz Sherwood-Randall, who accompanied Biden to Houston.

Biden was joined for much of his visit by Gov. Greg Abbott and Sen. John Cornyn, both Republicans, four Democratic Houston-area members of Congress and Houston Mayor Sylvester Turner and Harris County Judge Lina Hidalgo.

The president also stopped by a mass coronavirus vaccination center at NRG Stadium that is run by the federal government. Biden on Thursday commemorated the 50 millionth COVID-19 vaccination since he took office, halfway toward his goal of 100 million shots by his 100th day in office. That celebration followed a moment of silence to mark the passage earlier this week of 500,000 U.S. deaths blamed on the disease.

Democrat Biden suggested that he and Republicans Abbott and Cornyn could find common cause in getting Americans vaccinated as quickly as possible.

“We disagree on plenty of things,” Biden said. “There’s nothing wrong with that, but there are plenty of things we can work on together. And one of them is represented right here today, the effort to speed up vaccinations."

Texas' other U.S. senator, Ted Cruz, an ally of former President Donald Trump and one of a handful of GOP lawmakers who had objected to Congress certifying Biden’s victory, was in Florida Friday addressing the Conservative Political Action Conference.

Cruz, who has been criticized for taking his family to Cancun, Mexico, while millions of Texans shivered in unheated homes, later said the trip was a mistake, but he made light of the controversy on Friday. “Orlando is awesome,” he said to laughs and hoots. “It’s not as nice as Cancun. But’s nice.”

At the peak of the storm, more than 1.4 million residents were without power and 3.5 million were under boil-water notices in the nation's third largest county.

Post-storm debate in Texas has centered on the state maintaining its own electrical grid and its lack of better storm preparation, including weatherization of key infrastructure. Some state officials initially blamed the blackouts on renewable energy even though Texas relies heavily on oil and gas.

In Washington, Biden's climate adviser said the deadly winter storm was a “wake-up call” for the United States to build energy systems that can withstand extreme weather linked to climate change.

“We need systems of energy that are reliable and resilient,” Gina McCarthy said in an interview with The Associated Press.

The White House said Biden's purpose in visiting was to support, not scold.

Biden was bent on asking Texans "what do you need, how can I help you more," White House press secretary Jen Psaki said. “And what can we get more for you from the federal government.”

Galveston County Judge Mark Henry said in an interview that he didn't know what more the federal government could do to help because the failures were at the state level. But Henry, a Republican who is the highest county official in the suburban Houston county, said that if Biden “thinks it's important to visit, then come on down.”

Biden wanted to make the trip last week, but said at the time that he held back because he didn’t want his presence and entourage to detract from the recovery effort.

Houston also was the destination for Trump's first presidential visit to a disaster area in 2017 after Hurricane Harvey caused catastrophic flooding that August.

Trump, who is not known for displays of empathy, did not meet with storm victims on the visit. He returned four days later and urged people who had relocated to a shelter to “have a good time.”

5:30 p.m.: President Biden spoke from the FEMA vaccination site at NRG Park,detailing efforts of continuing to slow the spread of COVID and what's being done with vaccines.  His address came moments after an advisory board pushed Johnson & Johnson's single-dose vaccine one step cloesr to approva.

4:15 p.m.  President Biden has arrived at NRG Park to tour the FEMA vaccine distribution center. He will speak shortly.

3:55 p.m. The last stop before returnin to Ellington Field for President Biden will be NRG Park to see the Houston vaccination center. Security is preparing for him to arrive.

Police have blocked off McNee Rd at Main St, but that’s having no impact on the @fema vaccinations happening right next to it. @KHOU #KHOU11 pic.twitter.com/910vwIhfjM

My last shots of the President as he visited with some @HoustonFoodBank volunteers. Media pool is now done. We’re in a holding room as the President does a sit down interview with Univision. His next atop will be the FEMA vaccination site at NRG. #khou11 pic.twitter.com/AzkuKCm855

2:10 p.m. - President Biden meets up with the First Lady at the Houston Food Bank.

President Biden @POTUS has made it to @HoustonFoodBank where he will meet up with his wife and your the facility that has helped truly been the lifeline for thousands and thousands of Houstonians during pandemic. #khou11 pic.twitter.com/ZiojoAOliY

Currently at @houstontranstar with #HarrisCounty Judge @LinaHidalgoTX and our delegation viewing emergency operations for our region. pic.twitter.com/MOvuCKY425

The First Lady of Texas, Cecilia Abbott, is helping @FLOTUS pack meals for Houston-area kids. You see her on the end with a mask designed to look like the state flag. #khou11 pic.twitter.com/YYEclfXkpH

12:09 p.m. - President Biden and First Lady Dr. Jill Biden arrive in Houston. KHOU 11 was there as Air Force One landed at Ellington Airport.

12:08 p.m. - Protestors are outside the Houston Food Bank. KHOU 11 Reporter Melissa Correa said one group is spotlighting the massacre that happened in Ethiopia's Tigray that left hundreds dead and another group is Trump supporters.

HAPPENING NOW: as President Biden prepares to land in Houston, two separate groups of protestors are near the Houston Food bank. One is spotlighting what’s happening Tigray, the other are supporters of Fmr. President Trump. HPD is making sure it stays peaceful. #khou11 pic.twitter.com/WUV7EI5oxr

The chants vary from “stop genocide in Tigray” to “USA! USA!” #khou11 pic.twitter.com/TXqHoYoGoz

Even with @POTUS visiting @nrgpark later today, it’s business as usual at the @fema mass vaccination site. They still plan to do their scheduled 6,000 shots today. @KHOU #khou11 pic.twitter.com/sma2zoVVbK

11:46 a.m. - KHOU 11 crews are set up across Houston awaiting President Biden and the First Lady's arrival. 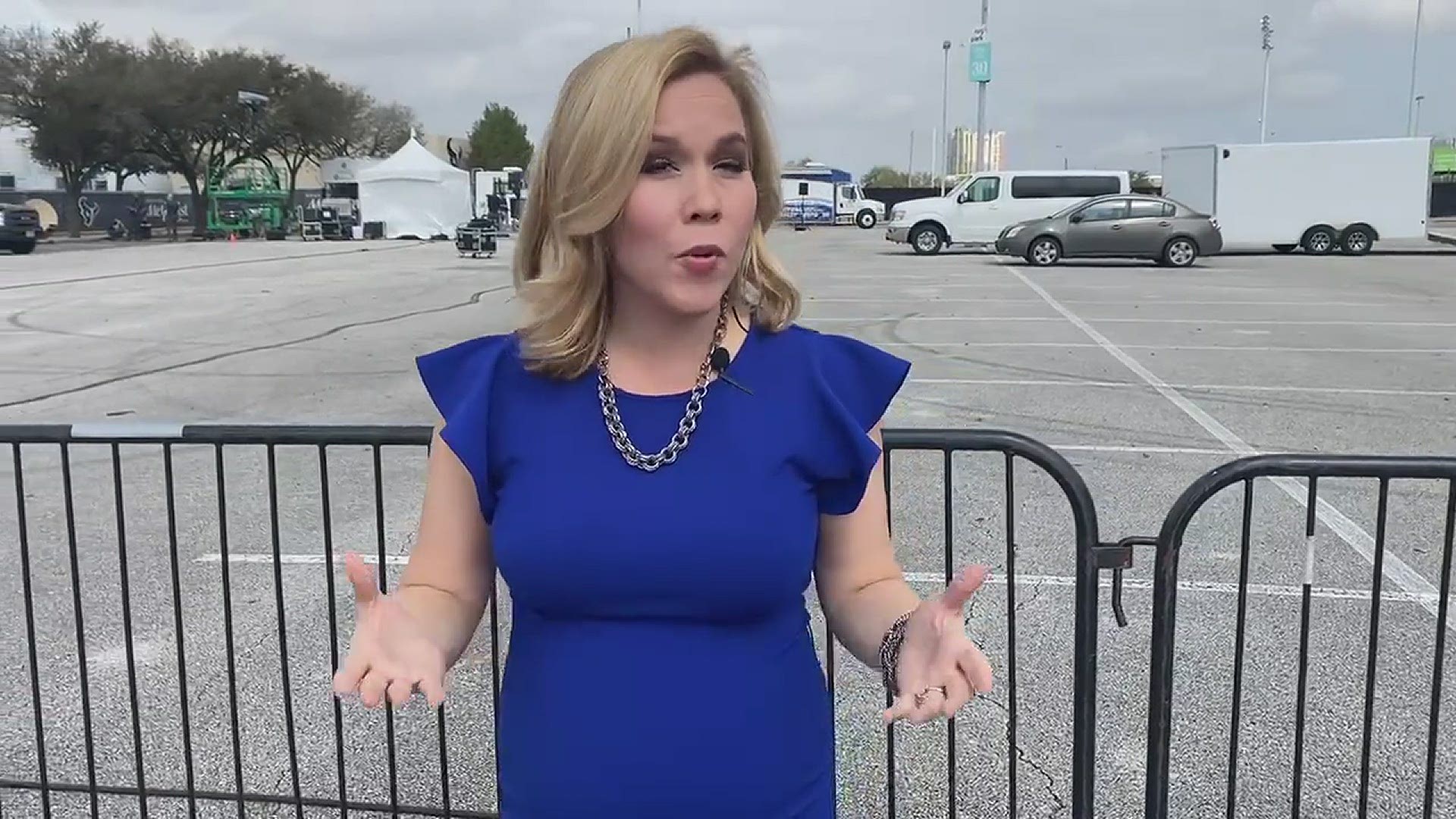 11:35 a.m. - Houston SPCA employees stood across the street from Harris County's Emergency Operations Center as Biden's motorcade drove by. They held up signs campaigning for the president to add a "first cat" to the family.

RELATED: Houston SPCA campaigns for Bidens to 'paws' and adopt a rescue cat or dog

.@HoustonSPCA is directly across the street from the Harris County Emergency Operations Center. Their staff is hoping @POTUS will stop by to adopt the First Cat. 😺🐈🇺🇸 pic.twitter.com/ehGsHBFc7u

7:30 a.m. - Houston Police Chief Art Acevedo said travelers should expect traffic delays starting at noon and into the evening hours due to the Bidens' visit. There will be a large police presence primarily near the 610 Loop. Check live traffic

Today @houstonpolice and our partners will work to facilitate a @POTUS visit. Please expect intermittent traffic delays starting at noon and into the evening commute and a large police presence primarily in and close to the 610 loop. As always, please report suspicious activity.

Live at Ellington Field this morning ahead of President Biden’s visit to Houston.

What we know about how he and the First Lady will spend their day: https://t.co/nEYPgbIB5K#KHOU11 #HTownRush pic.twitter.com/syZCC30KHh

6 a.m. - We're taking a look back at past presidential visits to Houston. Click here to read more.