Reintroduced elk are thriving in the mountains, but researchers don't know their population. 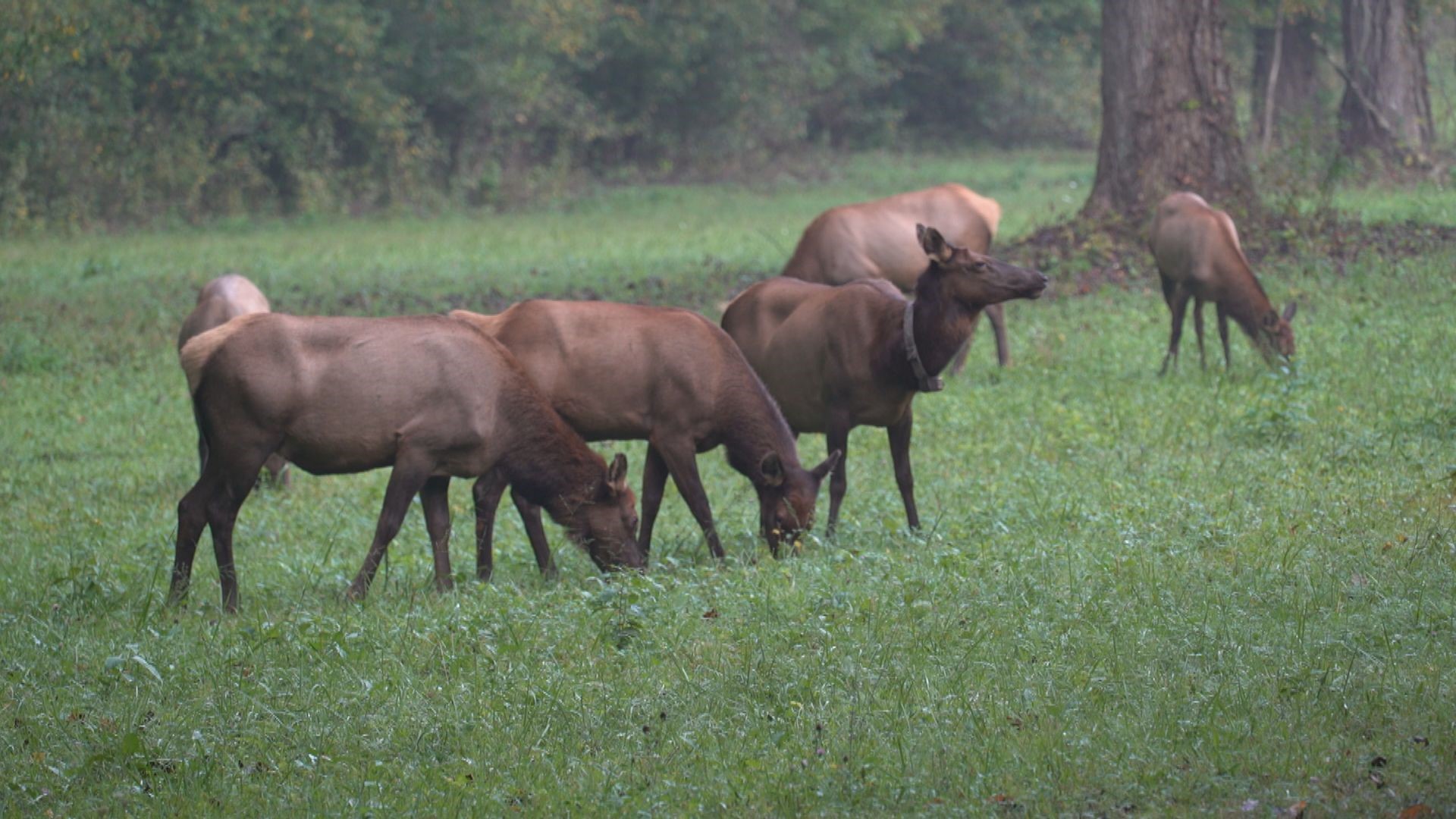 HAYWOOD COUNTY, N.C. — When the National Park Service (NPS) reintroduced elk in the Great Smoky Mountains National Park in 2001 and 2002, wildlife biologists knew the exact number of animals on the landscape.

"We brought in 52 elk," said Kim Delozier, a retired NPS biologist who now works for the Rocky Mountain Elk Foundation.  "Since then, the herd has split and expanded from Cataloochee over to Oconaluftee, Cherokee, the Blue Ridge Parkway, and other areas outside the park searching for a good place to live."

Elk stand as the biggest beasts in the Appalachians. Some bull elk weigh between 800 and 900 pounds.

It may not seem difficult to keep an accurate count of the largest animals in the national park, but elk can seemingly disappear when they step out of clearings and into the forest.

Credit: WBIR
A bull elk bugles as it stands beside females in its harem in the Great Smoky Mountains National park.

"It's really tough to do a population determination here in the mountains. People want to know how many elk we have. And the answer is we really don't know.  Some people think we have 150-plus, whatever 'plus' is," said Delozier.

Stiver said part of the difficulty in keeping track of the elk population is some methods were developed for other parts of the country.

"The techniques that are used in the West aren't that feasible in the East," said Stiver.

Credit: WBIR
A female elk grazes along a roadside near Oconaluftee in the Great Smoky Mountains National Park.

"We're working with the North Carolina Wildlife Resources Commission, the Eastern Band of Cherokee Indian, and the University of Tennessee to come up with a new population estimate for elk.  It's a PhD student, Jessica [Braunstein] is doing the project.  When the project ends, we'll hopefully have a better estimate of what the elk herd is in our region," said Stiver.

Stiver said the research project will likely take around three years and will use various techniques, including testing DNA and elk fecal pellets.

After investing millions of dollars to reintroduce the elk that were hunted out of existence a couple of centuries ago, governments need an accurate headcount to measure the program's success.  Likewise, groups need to know the resources required to maintain safe habitats for the herd with open spaces and appropriate vegetation.

"We put a lot of money into habitat work. So, opening these areas up and managing it by putting something out there that's better for them to eat," said Delozier.

Delozier said the elk deserve credit for the successful reintroduction. After some early "growing pains," the animals adapted to living with predators in the Smokies.

Credit: WBIR
A young elk grazes while surrounded by adult members of the herd in the Great Smoky Mountains National Park.

"When we brought these elk in, the mothers were pretty naive. So a lot of the bears actually preyed on the calves. Mothers were not very defensive. But that's changed now. Mothers will protect their young. That's what they're doing better," said Delozier.

The study could potentially impact if, when, and where people in North Carolina may be allowed to hunt elk.

Since 2009, Tennessee has allowed a small amount of elk hunting permits. The state uses a raffle system to give a handful of hunters permission to kill elk from a herd in the North Cumberland Wildlife Management Area.  The North Cumberland WMA includes portions of Anderson, Campbell, Morgan, and Scott counties.