A new art exhibit is open and it's all about the protests that have taken place over the last few months. Organizers say the pieces on display mark history. 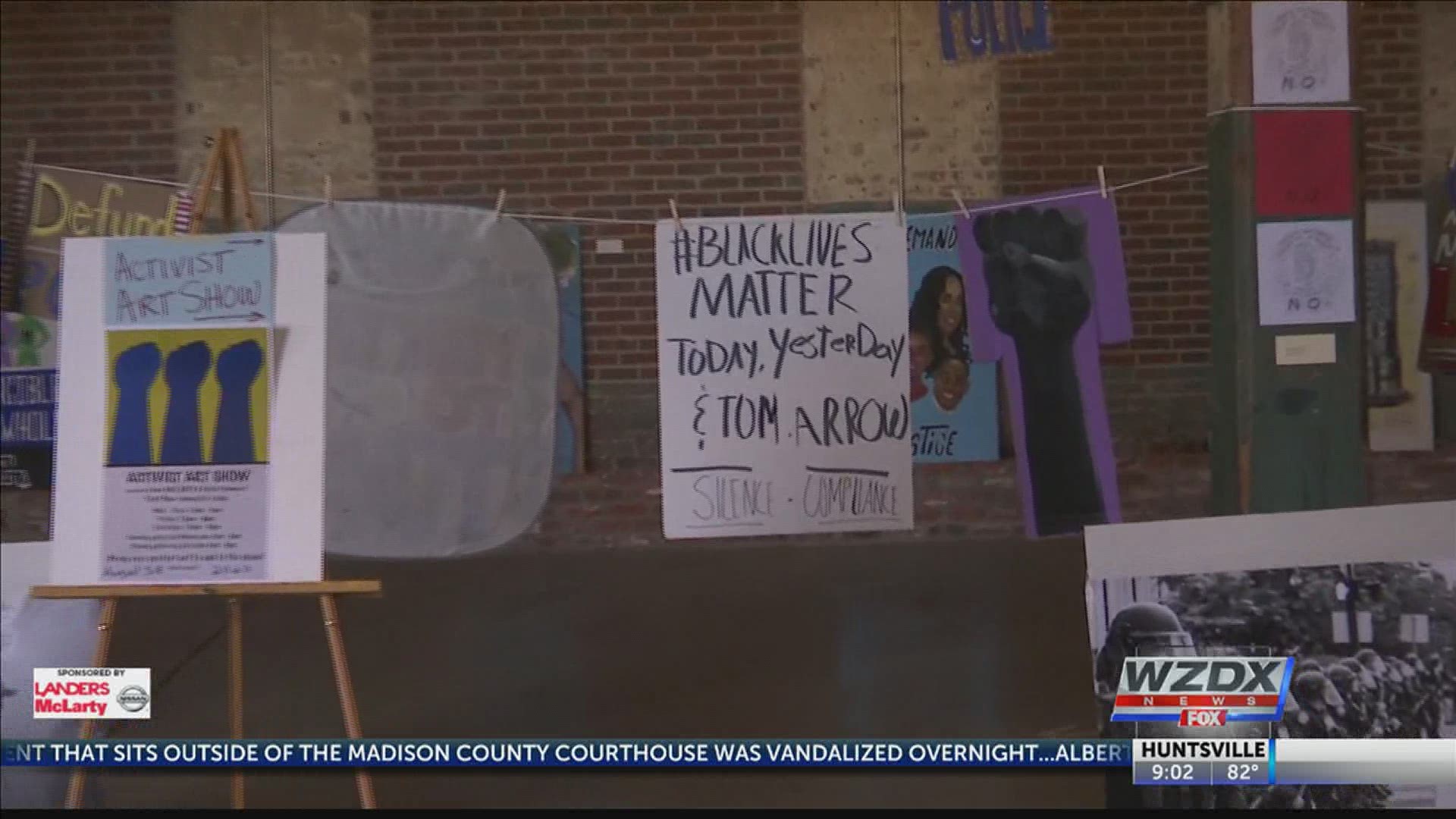 HUNTSVILLE, Ala. — A new art exhibit is open and it's all about the protests that have taken place in Huntsville and the Valley over the last few months. We went to the exhibit on opening night Wednesday evening to speak with the locals who put it all together.

The Activist Art Show is located on the first floor at Lowe Mill in Huntsville.

A brand new activist art show has popped up in Huntsville. Curators are exhibiting everything from signs carried during demonstrations to paintings made by local artists. Organizers say it’s all about documenting the history that’s happening right before our eyes.

We spoke with Iris Billiter, a protester and organizer of the Activist Art Show. She says, “All the protests signs that are hanging up have been used in protests here in Huntsville and some of them are a little banged up. We even have a protest sign that has teargas on it that was used in June 3rd protests, I believe.”

The exhibit has images taken during the demonstrations on June 1st and 3rd at the Madison County Courthouse square in Downtown Huntsville when law enforcement fired tear gas into the crowds.

The Activist Art show isn’t put on by any one group, but a number of independent activists.

One independent journalist and legal observer helped organize the exhibit. She says she’s covered protests in cities like Portland, New York and overseas, and has been going to demonstrations in the Valley for the past few months. She tells us what she’s taken away.

She says exhibits like this one are necessary because film is forever, and the community is able to see what happened from right there on the ground. She believes what's displayed in the exhibit contrasts what has been reported by Huntsville Police. Burkholder says, “It’s really interesting to watch their actions and then how they speak about their actions and actually misrepresent the truth of what has happened. So, I have photographs and videos, and so do other independent journalists here that literally prove, Chief McMurray for instance, is lying to city council and the mayor in a public forum.”

Iris Billiter says some might discount the exhibit because of the simplicity of some of the pieces. But, she says the protest signs have more meaning than meets the eye. Billiter adds,  “It’s the only resource we have. It’s the only way we have to speak out. So, these are our words and our ideas that we put-- yeah, just on cheap cardboard.”

But, she says the meaning behind the signs is priceless.

Iris Billiter adds, “These words-- I mean, a lot of power is in these words right here.”

The exhibit will be open at the first floor connector of Lowe Mill until Saturday, August 8.

RELATED: Founder is encouraging community to 'Save Merrimack Hall'