Eula Catherine Sammons Battle was a Huntsville native and deeply involved with her community. 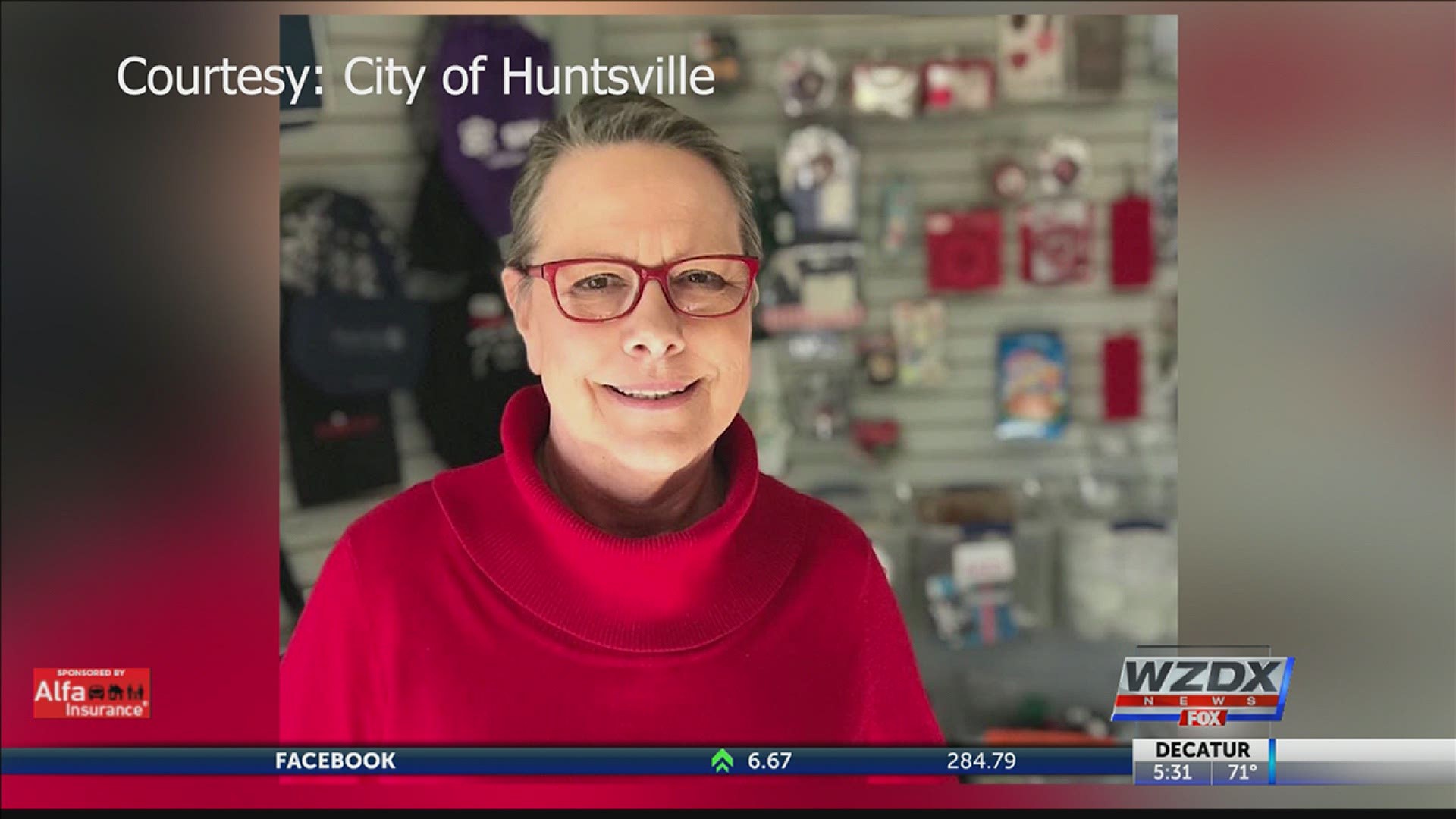 HUNTSVILLE, Ala. — Eula Battle was laid to rest today in Maple Hill Cemetery after a hard-fought battle with cancer. She was the wife and best friend of Huntsville mayor Tommy Battle. Eula Battle is remembered fondly during her memorial services at Trinity United Methodist Church in Huntsville.

Those who knew Eula Battle best say her impact on the Huntsville community will be felt for years to come. Our reporter spoke with representatives from Free 2 Teach earlier, the non profit organization that gives free school supplies to teachers in need. Battle co-founded and directed the organization. They’ve been receiving donations to the organization in honor of Mrs. Battle.

The family has asked that memorial contributions be made to Free to Teach and Trinity United Methodist Church if you wish to pay your respects.

Signs and displays of appreciation have been put up around the city, like one from Free 2 Teach on California Street near Governors Drive

During a moment of solemn prayer during the service these words were spoken, “Everything you have given to us is yours. As first you have given Eula to us, we give her back to you. Receive Eula into the arms of your mercy. Raise her up with all your people, and receive us also.”

Thursday afternoon, the City lowered the flag at City Hall to half-staff to honor Eula Battle. All remaining flags in Huntsville are set to be flown at half-staff Friday until sunset as ordered by Governor Kay Ivey’s office. 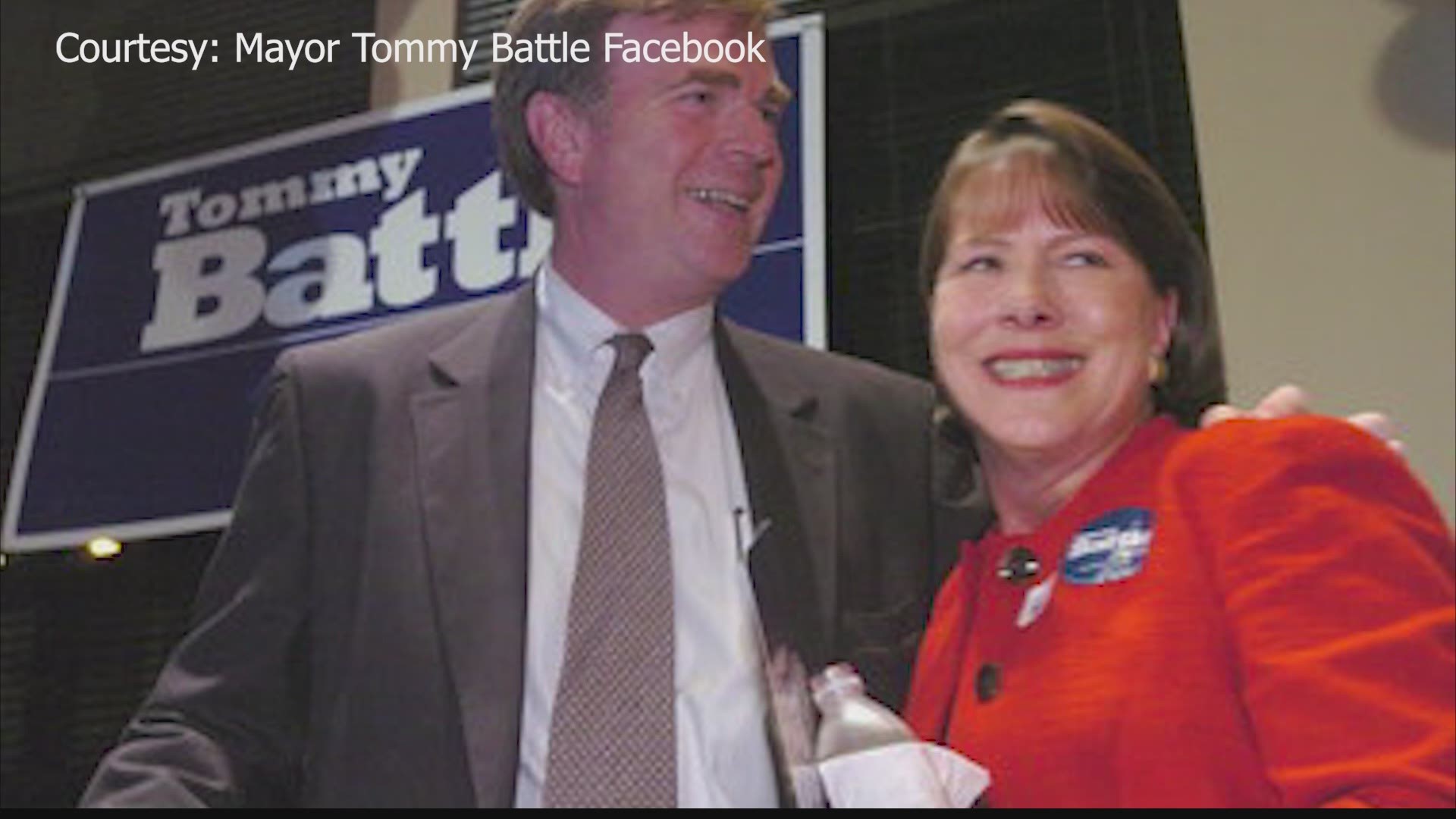 The City of Huntsville released this tribute to her:

Eula was born in Huntsville, Alabama, on Sept. 29, 1955, to Dr. Robert A. Sammons and his wife, Calvert Sammons. The second youngest of five children, Eula loved her hometown and joyfully spent her life giving back to her community.

A 1973 graduate of Huntsville High, Eula earned a degree in elementary education from Wesleyan College, and soon after graduation, began a successful 31-year career as a schoolteacher. After her first year of teaching in Conyers, Ga., Eula returned home to teach kindergarten in the Madison County School System. She adored her students, calling each of them her “babies,” and was well known for going above and beyond to meet each child’s needs. In 2000, she was named Madison County Teacher of the Year for her outstanding service and dedication.

Once Eula “retired” from public education, she went on to support and teach in the newly formed Greengate School, an academic program focused on students with dyslexia and other learning disabilities. Eula found this role especially rewarding, given her own journey in managing dyslexia.

Education remained a passion for Eula throughout her life. In 2010, when the state legislature severely cut the education budget, eliminating a $550 stipend for teachers to supply their classrooms, Eula took action. She co-founded Free 2 Teach, a non-profit that supplies free school materials for local teachers. Eula started out by filling her garage with boxes of binders donated by local defense contractors and any other school supplies she could convince other businesses to donate. Demand for supplies grew quickly, and Eula’s spunky determination proved resolute when she called on companies to contribute.

After assuming the role of Free 2 Teach’s Executive Director, Eula’s vision and experience culminated in the non-profit’s extremely successful mission. To date, Free 2 Teach has distributed more than $7 million in supplies and materials to Huntsville-area teachers. Eula supervised a strategic plan for Free 2 Teach to continue operations in her absence, a fitting legacy of her “labor of love” that will benefit local teachers and schoolchildren far into the future.

Credit: City of Huntsville
Eula Battle interviews at Free2Teach, an organization she co-founded that gives free supplies to teachers in Madison County.

Eula’s focus on education also influenced a Mayoral initiative – the Mayor’s Book Club – where she championed businesses to fund more than 100,000 books for students in Title 1 schools. Eula and Tommy wanted children in need to be able to build their own personal libraries to hopefully instill a love of reading and learning. Each year, during the book distribution, they visited the schools to read a Dr. Seuss classic – a highlight for the younger students.

This shared passion for community service made Eula the perfect match for her husband. She campaigned with Tommy door to door on their dates when he was first running for mayor in 1988 – a harbinger of times to come. She was instrumental in garnering public support for his subsequent bid for mayor in 2008 and tirelessly traveled the state when Tommy entered the 2018 governor’s race, always promoting Huntsville and gathering a network of more friends and fans along the way.

Eula never met a stranger and those who had the honor of meeting and knowing her will miss her gregarious spirit, robust laughter and fierce devotion to family and friends. She was everyone’s favorite aunt, best friend, and enthusiastic cheerleader. Eula was a terrific cook, challenging Tommy’s culinary expertise, making mealtime at the Battle house a delicious affair.

Humble and thoughtful, Eula shunned pretentions and was drawn to helping those in need – friends and strangers alike. Her generosity was unparalleled. Once, after hearing a high school student talk about his hopes of being the first in his family to go to college, Eula quietly went out and purchased the young man his first laptop so he would have the necessary tools to help make his dream come true.

A devoted mother, Eula was exceptionally proud of her son, Drew, in whom she inspired her values of faith, responsibility, and service. She cherished being part of Drew’s journey from son to husband and father and loved watching him parent his two young sons. Eula often marveled at her good fortune when Drew married Lauren, who adeptly manages a business and motherhood. With grandsons George and Benjamin, she happily indulged them with all the rights and privileges afforded a grandparent.  A visit to “Ginn’s” house promised a period of behavior adjustment when the boys returned home. This made Eula exceptionally happy.

As a Huntsville native, Eula was involved in many activities and organizations throughout her lifetime. A former member of the Junior League of Huntsville and Grace Club, Eula was an active member of Trinity United Methodist Church. She was selected as a participant in the Leadership Huntsville Class 26 and belonged to Alpha Kappa Delta, an honorary organization for women educators, and to the Daughters of the American Revolution (DAR). She was honored by the Women’s Economic Development Council Foundation in 2014, received the DAR Founders Medal for Education in 2019, and received the 2020 Boy Scouts Whitney M. Young Community Service Award. In 2019 Athens State University established the Eula S. Battle education scholarship so she could have a hand in developing future teachers. In 2020, Eula was a White Linen and Wine Honoree for the Russell Hill Cancer Foundation.

In lieu of flowers, memorials may be sent to Free 2 Teach or Trinity United Methodist Church in Huntsville. Laughlin Funeral Home is handling arrangements.

The City of Madison expressed its condolences to Mayor Battle and his family:

Mayor Finley writes, “Our deepest condolences to Mayor Battle and the entire Battle family for the loss of an incredible lady, Eula Battle. In addition to being a fantastic First Lady of Huntsville her focus on supporting our educators by starting Free to Teach positively impacted thousands of classrooms throughout Madison County. We love you and wrap our arms around you during this time.”

Madison County Schools expressed their condolences to Mayor Battle and his family:

Superintendent Allen Perkins writes, "We would like to offer our condolences to Huntsville Mayor Tommy Battle on the passing of his wife, Eula. Mrs. Battle taught in the Madison County School System for 22 years and after her retirement, continued to support teachers and education through her Free2Teach organization. We admired her dedication to education and her community. Our thoughts and prayers are with the Battle family."