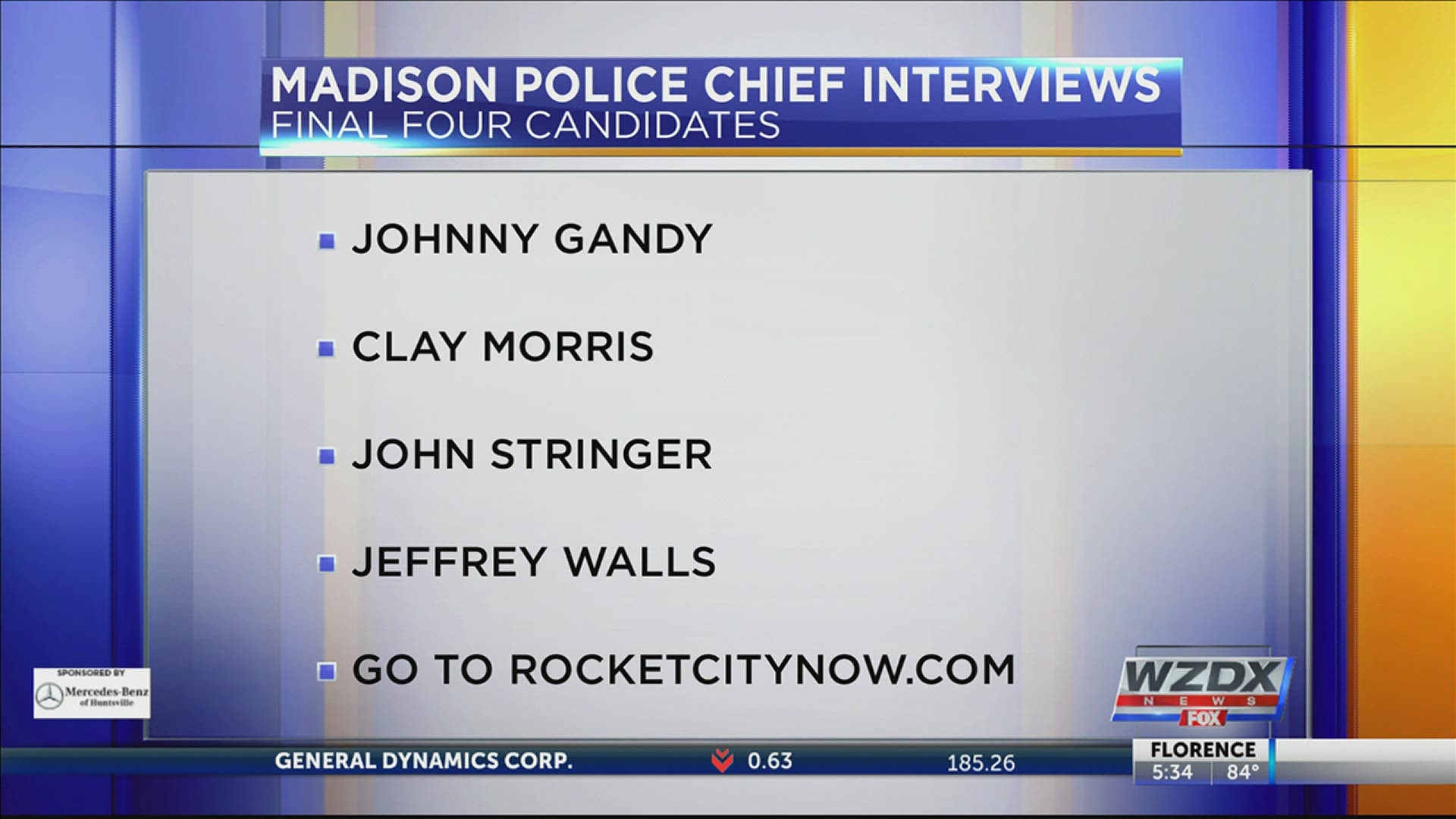 MADISON, Alabama — The city of Madison is holding a work session on May 8 to hold interviews with the final four candidates for the city's new police chief.

The work session is set to begin at 8 a.m. and interviews will be open to the public. In order to avoid interruptions during the interview process, the doors to the council chamber will be closed once an interview starts. If you wish to attend, you may only enter at the beginning or exit at the conclusion of an interview.

The city provided the following brief backgrounds on each candidate:

Johnny Gandy is a Captain of the City of Virginia Beach Police Department, currently supervising more than 100 certified officers and non-sworn staff for a precinct of approximately 250 square miles. The 1st Precinct incorporates the US Navy’s East Coast Master Jet Base, industrial and office complexes, a large shopping mall, and numerous residential neighborhoods from assisted housing to multi-million dollar homes. Captain Gandy has progressed with the Department since he was hired as a Patrol Officer in 1987, becoming an Acting Detective in 1991, and a regular Detective in 1996, promoted to Sergeant in 2000, a Lieutenant in 2010, and then a Captain in 2018.

Captain Gandy has a long list of achievements. Two examples include: 1) establishment of a Crisis Intervention Team (CIT) program, developing in-service training for Police Officers, and authorized a grant package to start the program, partnered with many CIT staffed agencies that resulted in the largest most successful program in the state; and 2) When Captain Gandy supervised the department’s Domestic Violence Unit (DMU), the local Navy military bases had an epidemic of domestic violence incidents involving military families due to increased deployments, and Captain Gandy was asked to tailor the program for military members, which resulted in a drop in incidents.

Clay Morris served as the Department of Justice (DOJ) Drug Enforcement Administration (DEA) from September 1995 to September 2020 as Assistant Special Agent in Charge, Deputy Director, Section Chief, and Acting Diversion Program Manager, in the Birmingham District Office and the Atlanta Field Division. His responsibilities included leadership and oversight of the Birmingham District Office, Resident Offices for Huntsville, Montgomery, Mobile, and the Dothan Post of Duty, for a staff of approximately 130 personnel (including federal, state or local law enforcement officers). Prior to working for the DOJ, Clay Morris served as Deputy Sheriff and Deputy Marshal for 3.5 years at East Baton Rouge Parish Sheriff’s Office and the Monroe, Louisiana City Marshal’s Office. In his career with the DEA, he has managed budgets from $7.5 to $32 million.

Clay Morris has a long list of achievements. Two examples of large-scale complex enforcement operations addressing life-threatening events include 1) Special Agent In Charge with the Alabama Law Enforcement Agency (ALEA), District Attorneys and Local Law Enforcement to arrest many doctors and pharmacists distributing drugs; and 2) While stationed at DEA’s Office of Investigative Technology, he established an international High Value Target project to rapidly obtain actionable intelligence and information which led to the location and arrest of “El Chapo” Guzman, leader of the Sinaloa Cartel, and numerous high value targets designated by the US government.

Clay Morris has a bachelor’s degree in General Studies from University of New Orleans, and a Master’s in Criminal Justice from Northeast Louisiana University (Louisiana Monroe), and completed DEA Senior Leadership Institute in 2014.

John Stringer has been with the Madison Police Department since March of 1997, and has been the Acting Police Chief for the Department for four months, managing 107 employees and a budget of $8.7 million. His regular position is Major/Assistant Chief since October of 2019. From August of 2012 to October of 2019 he served as Captain of Special Operations for five years, and Captain of the Investigation Division for approximately 2 years. Major Stringer began his career in law enforcement in 1996 as a Patrol Officer with the Huntsville Police Department; then sought employment outside of Police work, and chose to return to Police work when he was hired by Madison Police Department as a Patrol Officer in 1997. He continued to progress up the ranks to Investigator, Sergeant, Lieutenant, Captain and then Major of the Department.

Major Stringer has a long list of achievements. Two examples include 1) He is a member of the Crisis Intervention Team (CIT) Steering Committee and was tasked with establishing a CIT for the Madison Police Department, and working with a Detective designated as the City’s CIT and Community Mental Health Officer, to develop the CIT program, resulting in 12 Madison Police Department CIT Officers qualified to assist citizens experiencing mental health crises; and 2) He led the team that established a 12-hour shift, compressed work week, which has helped the department with recruitment and retention.

Major Stringer has a bachelor’s degree in Psychology from UAH, and an MBA in Public Administration from Columbia Southern, and completed the FBI National Academy in 2015.

Jeffrey Walls is a Police Commander of the New Orleans Police Department, and has served in this role for approximately 10 years, currently supervising 100 certified officers. New Orleans has eight Districts, and Commander Walls is currently serving in the 2nd (Uptown) District, and had served in the 8th District (French Quarter) for 6.5 years, and the 3rd District (Lake View), as well as the Mounted Division. Commander Walls has progressed with the Department since he was hired as a Patrol Officer in 1997 progressing to Detective, Sergeant in Homicide, Lieutenant, and then to the rank of Commander in 2011.

Commander Walls has a long list of achievements. Two examples include: 1) Involvement with the Community Advisory Board (PCAB), comprised of members from every spectrum of the community, offering the community a voice into how they police and providing citizens more understanding of the department; and meeting with as many neighborhood groups as possible, out of 50 in his district; and 2) management of large-scale public events (including the Super Bowl Game, Alabama and LSU Championship Game, and others); and managing the Mounted Unit, and community fundraising events to fully support the Unit (Hops and Cops and Horse Soccer).

Commander Walls has a bachelor’s degree in Criminal Justice from Loyola University, and a Master’s in Homeland Security and Emergency Management from Tulane University, and completed the Police Executive Research forum’s Senior Management Institute in 2018.

IN OTHER NEWS: National 'Coffee with a Cop' Day: Madison Police meets with community