A news report says the horse had tested positive for the drug scopolamine after winning the Santa Anita Derby, one of the final prep races for the Kentucky Derby. 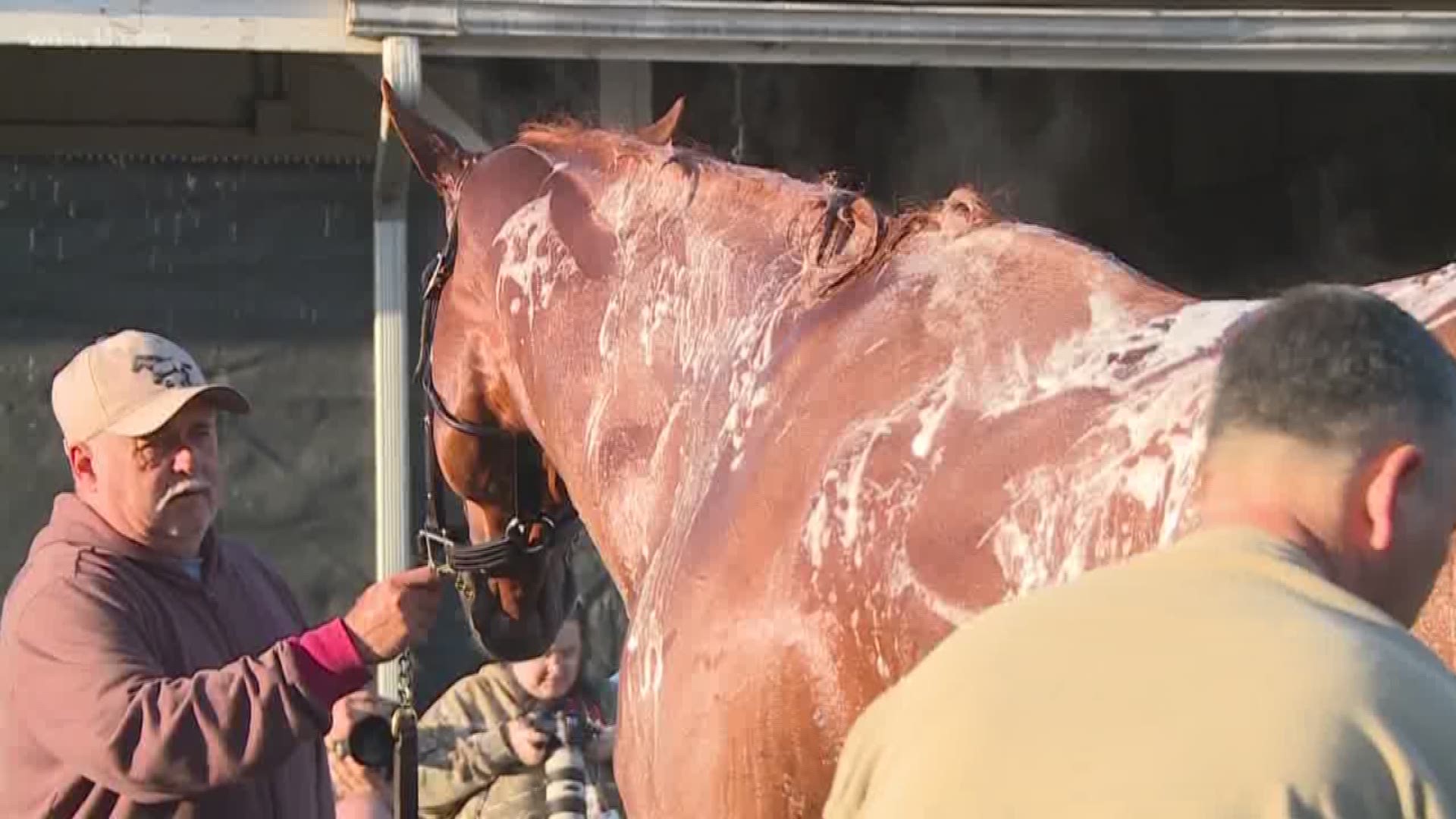 LOUISVILLE, Ky. — The New York Times says Justify won the 2018 Triple Crown after a failed post race drug test at a California track that could have kept the horse out of the Kentucky Derby.

The newspaper reported Wednesday that Bob Baffert-trained Justify tested positive for the drug scopolamine after winning the Santa Anita Derby, one of the final prep races for the Kentucky Derby. Justify went on to win the Derby and took the Preakness and Belmont stakes to complete the Triple Crown.

The Times said instead of a speedy disqualification, the California Horse Racing Board took more than a month to confirm the results. The newspaper also reported that instead of filing a public complaint, the board made decisions behind closed doors as it moved to drop the case and lighten the penalty for horses found to have scopolamine in their systems.

We spoke to trainers on the backside of Churchill Downs who say it's too early to voice their opinions without all the facts, but say the most important part of this sport is integrity.

The newspaper said test results, emails and internal memorandums show how California regulators waited nearly three weeks, until the Kentucky Derby was only nine days away, to notify Baffert of the positive test. Then, two months after the Belmont victory, the board disposed of the inquiry altogether during a closed-door executive session.

Baffert released a statement Thursday, saying, "I unequivocally reject any implication that Scopolamine was ever intentionally administered to Justify, or any of my horses."

"Justify is the one of the finest horses I’ve had the privilege of training and by any standard is one of the greatest of all time," Baffert continued. "I am proud to stand by his record, and my own.”

Baffert's lawyer Craig Robertson wrote in a letter to The New York Times that he believed the article is "long on sensationalism, short on facts, and does a great disservice to Mr. Baffert, JUSTIFY, and the entire horse industry."

“Until media reports surfaced Wednesday night, neither Churchill Downs nor the Kentucky Horse Racing Commission had knowledge of any potential positive tests that may have emanated from California in advance of the 2018 Kentucky Derby.

We do know that all pre- and post-race tests for 2018 Kentucky Derby participants came back clean, including Justify. In advance of our race each year, the Kentucky Horse Racing Commission conducts pre-race out-of-competition testing for every Kentucky Derby starter and all starters’ results were clean. After the race, the top finishers are tested for a myriad of banned substances and the results for all were clean.”

A member of the California Horse Racing Board also weighed in. Church Winner served for eight years.

"It is most unfortunate that the correct decision by the CHRB to not pursue action due to what was clearly a case of environmental contamination has been badly mischaracterized. All possible tests and procedures and investigations were followed by the CHRB Equine Medical Director and senior staff, which led to the overwhelming evidence that Justify, along with six other horses in four different barns at Santa Anita, ingested scopolamine from Jimson Weed which was present in the hay that had been delivered to the barns.

Furthermore, under ARCI guidelines scopolamine is a class 4c substance, which would not trigger disqualification or re-distribution of a purse. Under CHRB Rule 1843.2 classifications are based on the ARCI guidelines, unless specifically modified by the Board. The Board never modified that designation.

Beyond that, the whole premise of the story is false on its face. As stated in the story, the split sample that confirmed the presence of scopolamine did not come back from the independent lab until three days after the Kentucky Derby.

California law mandates that test results must remain confidential unless and until a complaint is filed and a complaint can only be filed at the end of an investigative process.

The California Equine Medical Director, the CHRB staff and the investigators followed all correct procedures in this case. When the Board was presented with all of the facts it correctly voted to affirm the staff recommendation. It would have been a complete miscarriage of justice for the CHRB to have taken action against Justify or Baffert, knowing full well that the horse was poisoned by an environmental contaminate and not injected with a substance."