Mother, community responds after man is stomped, kicked during arrest by Huntsville police

The video shows a Huntsville police officer stomping on the leg of Kemontae Hobbs, 22, while being arrested. 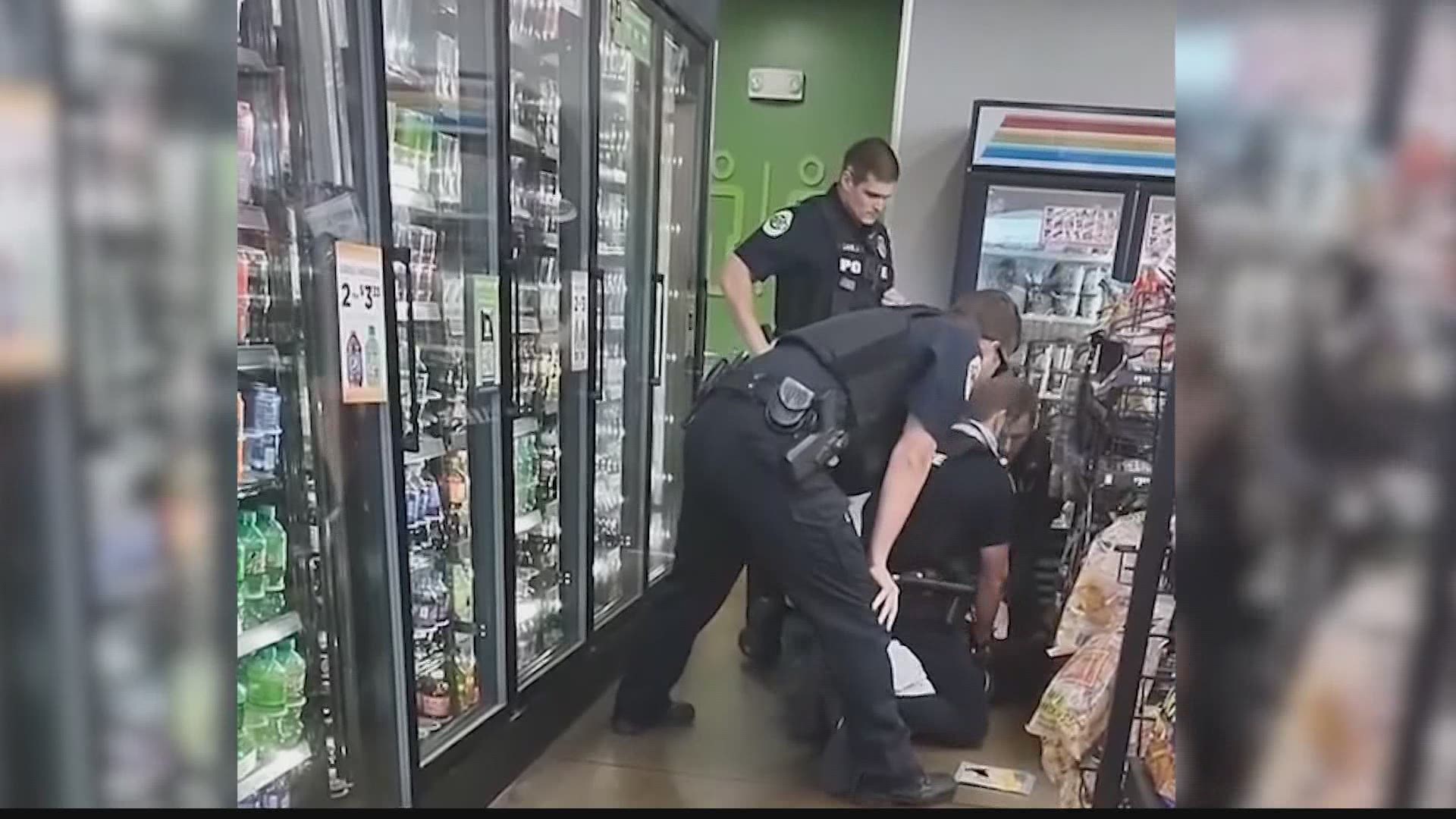 HUNTSVILLE, Ala. — A viral video of a man arrested at a Mapco gas station at 905 Memorial Parkway on Sunday, May 30th, has sparked outrage. On Tuesday, his mother spoke to news media following the arrest.

"I was like, this is my child. You beating my child, literally kicking his leg," says "I immediately got up and went to the police station, you know - and told them what was going on."

This is what Kimberlyn Hayes says she did when someone showed her a video of her son, seen there arrested at the Mapco gas station on Sunday evening. You see there, one officer trying to detain him.

Then later two officers arrive - one of them immediately stomping then kicking Kemontae's leg while telling him "stop resisting".

Hayes says her son has been diagnosed for Schizophrenia for several years. Hobbs had run-ins with police in the past. When asked why this arrest was different - "They probably because they didn't know him and don't know what's going on. But once they talked to him, they would have knew what went on."

Her attorney Martin Weinberg says Kemontae was given an x-ray and doesn't have any broken bones. However - "Officers need to be able to recognize that - and deal with more individuals more appropriately than they have been," he says.

"The Huntsville Police Department responded to a 911 call placed by a convenience store employee at 905 Memorial Parkway at 6 p.m., on Sunday, May 30. After an officer arrived on the scene and made contact with the suspect, the individual was non-compliant. The officer called for backup. An altercation with police subsequently occurred resulting in the arrest of Kemontae Hobbs, 22, for resisting arrest and obstructing government operations. We have viewed citizen-provided video that partially captures the arrest process. We understand concerns with use of force techniques used in the arrest and we take these concerns seriously. The full incident is under review including all actions taken by officers during the arrest process." – Huntsville Police Department

"I've read the directives on the proper use of force. I'm not an expert on that directive, but again, I think we all know that that was more than what was needed," Huntsville City Councilmember Frances Akridge, for District 2.

Kemontae was arrested for resisting arrest and obstructing government operations.

Huntsville Bail Fund, the organization that bailed Hobbs out of jail say excessive use of force by HPD is what they've seen before. "This is symbolic of a much larger problem that are happening in our community. This isn't the only incident of police brutality that we've seen in the last year," says Huntsville Bail Fund President, Tahirih Osborne.

Weinberg says they want to see all of the video, and isn't sure if Mapco captured it. However, they are thankful for what was captured from a bystander.

"We've got citizens that are doing their part in holding the city accountable. You know, that's important and had they not done that - we may not be hear talking about it today because the story didn't get out there," says Weinberg.

The family attorney says they'll file a claim, which is normally done before a lawsuit is filed.

“The Huntsville Police Department responded to a 911 call placed by a convenience store employee at 905 Memorial Parkway at 6 p.m., on Sunday, May 30. After an officer arrived on the scene and made contact with the suspect, the individual was non-compliant. The officer called for backup. An altercation with police subsequently occurred resulting in the arrest of Kemontae Hobbs, 22, for resisting arrest and obstructing government operations. We have viewed citizen-provided video that partially captures the arrest process. We understand concerns with use of force techniques used in the arrest and we take these concerns seriously. The full incident is under review including all actions taken by officers during the arrest process.” – Huntsville Police Department

The Rosa Parks Committee has issued the following statement and a letter to the U.S. Department of Justice.

"One year ago, concerned citizens engaged in peaceful protest in downtown Huntsville to display their concerns about the murder of George Floyd and the policing of Black people and other People of Color. The unfortunate treatment of some of the protestors by police officers and other law enforcement agents ignited a local movement that raised concerns and questions about some of the tactics and protocols used by the Huntsville Police Department (HPD).

Since those initial concerns were raised, other incidents have occurred – including the very recent stomping of Kemontae Hobbs by a HPD officer. Because Hobbs has been identified by his mother as having a mental disability, the use of force by the officer is particularly disturbing.

In light of these and other incidents, the Rosa Parks Committee of Huntsville has followed through with its pledge to make a formal request for the Department of Justice to investigate the HPD. Our concerns include the policing of citizens experiencing mental health crises, those engaged in lawful assemblies and protests, and those who are racial minorities. A copy of the letter accompanies this statement."

The Rosa Parks Committee of Huntsville/Madison County (RPC), on behalf of the people of Huntsville, Alabama, requests that the Department of Justice (DOJ) open a probe into multiple incidents of excessive force, unconstitutional policing, and other civil rights violations by the Huntsville Police Department (HPD). The focus of the inquiry requested is specifically centered on the response tactics and policies of HPD when deploying to (1) citizens experiencing mental health crises, (2) lawful assemblies and protests, and (3) discriminatory policing of minority populations. The scope includes specific events occurring in Huntsville, Alabama on April 3, 2018; June 1 and 3, 2020; as well as police practices which continue to the present day.

The use of excessive force by HPD was documented by Huntsville media following the April 3, 2018 murder of a local citizen, Jeff Parker, by HPD Officer William Darby. Though an HPD internal review board cleared Officer Darby of wrongdoing in the fatal shooting, District Attorney Rob Broussard disagreed with that conclusion. Officer Darby was subsequently indicted by a grand jury, and on May 7, 2021, was convicted of murder. Mayor Tommy Battle and HPD Police Chief Mark McMurray continue to state their belief that the jury was wrong in their guilty verdict, and Mr. Darby remains employed by the City of Huntsville. Two former U.S. attorneys – Jay Town and Joyce White Vance – criticized the fact that a Huntsville police officer convicted of murder continues to be paid by the city weeks after a jury found him guilty. At Mayor Battle’s urging in 2018 and 2019 the Huntsville City Council voted to spend $125,000 of the City’s money for Officer Darby’s legal defense.

Huntsville media outlets also documented chaotic events that occurred downtown on June 1 and 3, 2020, during protests where local citizens exercised their first amendment rights in response to the George Floyd murder. The City’s residents witnessed a series of incidents involving HPD officers, Madison County Sheriff’s (MCS) deputies, City of Madison (COM) police officers, and Alabama Law Enforcement Agency (ALEA) officers which escalated a lawful protest into a violent and chaotic situation resulting in harm to participants and property. In some cases, serious physical harm was inflicted by the police. We believe, despite a months-long investigation by the Huntsville Police Citizens Advisory Council (HPCAC), a DOJ investigation is warranted. The HPCAC report -

Also of concern to the RPC is the over-policing and/or discriminatory policing of local minority populations. For example, despite studies showing marijuana use is similar among all races, local people of color are arrested for marijuana possession eleven times as often as white citizens. A map showing locations of local marijuana arrests (copy attached) would lead one to believe that practically no one – of any age – uses marijuana in predominately white neighborhoods.

Since the DOJ is uniquely equipped to handle complex questions regarding constitutional rights, the Rosa Parks Committee of Huntsville/Madison County requests that the DOJ take a look at law enforcement in Huntsville centering around the practices and policies of the HPD that may deprive persons of their civil rights. Additionally, although other law enforcement agencies were involved in the chaos that occurred in downtown Huntsville on June 1 and 3, 2020, our primary concern at this time is the actions of HPD.

From the Citizens Coalition for Justice Reform:

"The Citizens Coalition for Justice Reform (CCJR), hereby issues a statement in regards to officers responding to a call on Sunday, May 30, 2021 at a local MAPCO gas station. A young man, later identified by Huntsville Bail fund as Kemontae Hobbs, was violently and savagely kicked by a Huntsville police officer. The event was captured by cellphone video footage. Since CCJR began looking into police reform one year ago, we, along with area residents, have witnessed disturbing patterns of unnecessary violent behavior from the Huntsville Police Department (HPD). Specifically, we have seen at least three separate incidents which demonstrate a systemic pattern of behavior. During Officer William Darby’s trial for a 2018 shooting, a traffic stop in December 2020, where an unidentified officer rips off his badge confronting bystanders and takes down a woman with a leg sweep, and the unidentified officer during Mr. Hobbs arrest this past weekend, a person known to HPD suffering from mental illness. In each instance, officers who come onto an active scene have superseded officers on the scene. These latter officers come in violent, escalating situations, putting officers and residents at risk, causing trauma and unwarranted physical harm. “Our mayor and chief of police continue to support these unnecessary escalations of violence by officers as appropriate practice. Therefore, we know at the very least, policies need an overhaul,” says Claudia Mesnil, one of the lead liaisons for the advocacy group. CCJR stands against wrongful actions and will continue fighting for better policies and processes that weed out abusive behavior against citizens, especially people of color and mentally ill individuals."

The other officer(s) start to restrain and state (communicate)

The original officer still in what seems to be body control.... never throws a punch... the Stomping Officer never aides in control

Again, how do 3 other officers find it better to restrain rather than stomp... and if this is a situation where the officer on top was truly loosing control... deploy the taser and then move on....

A controlled response from the other officers get you the exact same outcome and the mans leg is intact.

This could’ve been a positive video footage in all honesty" 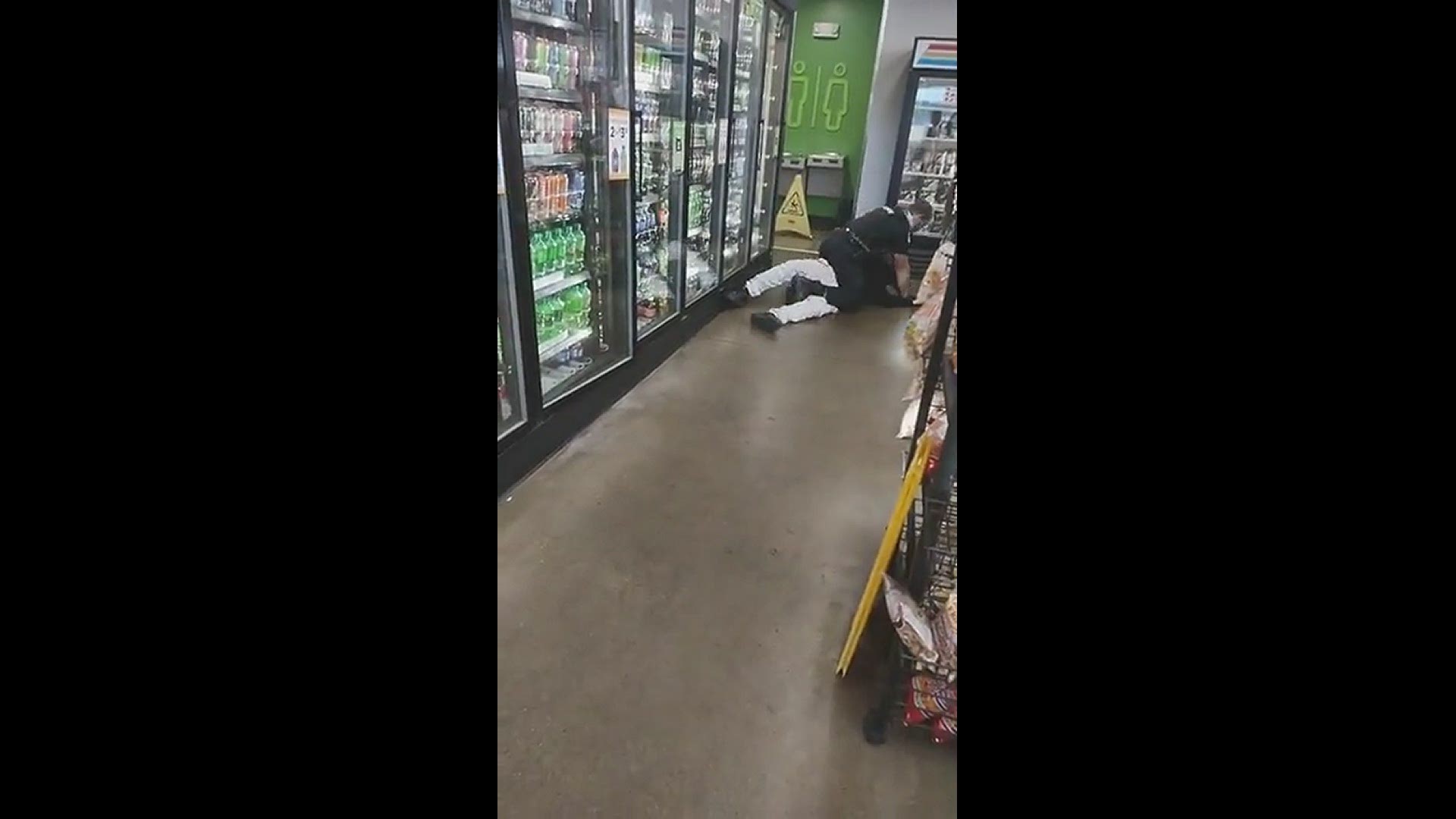