WATCH: Huntsville's Jazz in the Park 2021

Jazz in the Park is underway! It started as a series of small outdoor concerts and transformed into a multimedia event. 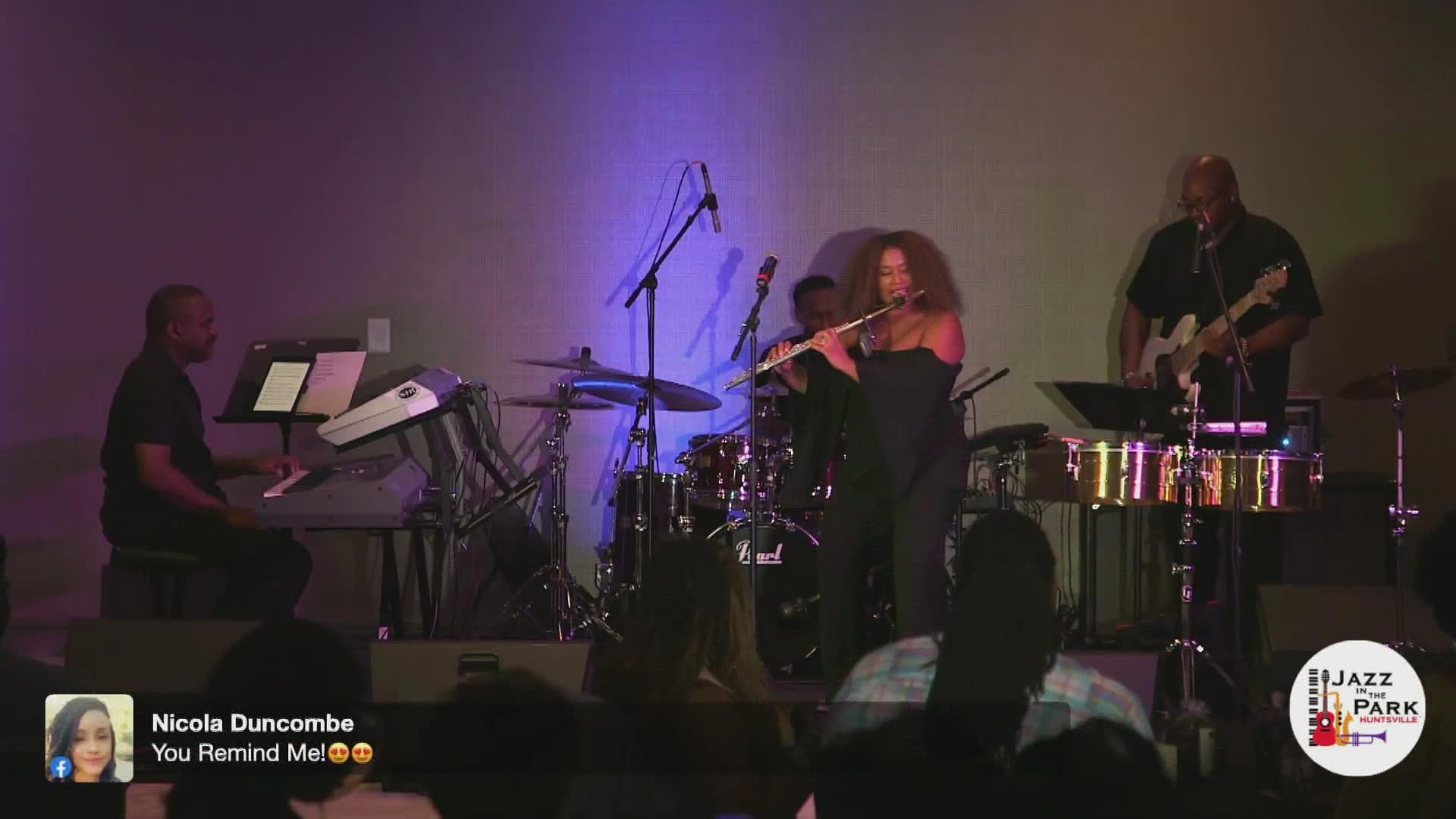 HUNTSVILLE, Ala. — Jazz in the Park celebrates its seventh year on Sept. 5 with an online streaming concert, something that's become all-too-familiar during the COVID-19 pandemic.

Nationally recognized jazz artists will take the stage beginning at 5:45 p.m. in a performance that will be live-streamed on Facebook, YouTube, and rocketcitynow.com.

How did Jazz in the Park come to be? WZDX spoke to one of the founders, Kenny Anderson, to find out. This is what he shared:

“So in 2014, I met Bernard Lockhart, who was the executive director of Magic City Smooth Jazz in Birmingham. Bernard had been doing concerts in the park for a number of years in the city of Birmingham and some of the surrounding areas, and during that time, Bernard became very convinced that if he could get the right level of sponsorship that he could actually begin doing a months-long concert series that would be able to be accessible to anybody who wanted to attend.

“So, he wanted to focus on free concerts with high-quality performances over the course of several months. Just prior to that I had come into the City of Huntsville as the Officer of Multicultural Affairs and so, Bernard and I were talking about his vision for what he was doing there and also expanding his brand. He said, 'I was not doing any further than Birmingham and I certainly would like to look at Huntsville, I’ve got my eye on Huntsville and what’s happening up there and so let’s try to make something happen.'

“Well, little did I know, in 2015, Bernard got a grant to do concerts in three outdoor state parks. And one of those parks was Monte Sano. And so, he reached out to me again and said, ‘Hey let's partner on this.’ I was able to come alongside him and provide some support for public relations and also to just kind of get the word out so people could understand that this thing was going to happen and that it was going to be a very fun event to take part in.

“So, Bernard planned a concert on a beautiful Sunday afternoon in April. It was overcast, it was cool, it was on the mountain, so, for me, it was just the perfect setting. And Bernard invited saxophonist Dee Lucas out of Atlanta, and also a home-based musician who plays lead guitar called Roland Gresham. And Roland, of course, and Dee did an amazing performance that afternoon to a very small crowd, but I think just being there that day bent Bernard in a way that made him feel that ‘I’ve got to do more in Huntsville, this is a great community with some great people and some great energy.’

“And so, immediately after that, we began talking about doing something related to what he was doing in Birmingham, which would be a series-long type of concert that could be sort of paired with what he was doing in that community. And of course, he immediately asked me, 'Is there a park outside, is there a park in downtown Huntsville?' I said there’s one right outside my window. I work at city hall and it’s Big Spring Park East. He said let’s go for it. Came down, looked at the park, and felt that it was the perfect location.

“We planned to have a one concert event that August. Now granted, the public park concert was in April. We had this first event in August. So, we had a very small window to turn things around. We identified a phenomenal saxophonist, a recording artist, Steve Cole, who would do the concert that day as a headliner. We had a concert performer, I should say a trumpeter, out of mobile called David Jones who came as our opening act. And that was the birth of Jazz in the Park here in Huntsville.

“Overcast morning, it rained that morning as they brought the stage up from Birmingham, and by 2:00 that afternoon, the sun had just burst through the skies. We knew that God had shined on our event. And so, as a consequence of that, we had 800 people come out on that first night and we immediately saw the potential for what Jazz in the Park would become. Immediately after that, Bernard said ‘This was wonderful. We’ve got to do more.

“And so we decided to have a series-long event every September with the formula being: every Sunday night in September from 6 to 9 p.m. we would have an opening act play for an hour, a thirty-minute intermission, and then a 90-minute headliner who would be a national or international recording artist.

“And since that time, which was 2017, that was our first full concert series, we’ve had some of the biggest performers in smooth jazz come through our community. Names like Adam Hawley and Brian Simpson, Althea Rene, and Kim Scott and so many more performers who have enriched the park in a very, very cool environment on a Sunday afternoon in early fall, a mature audience of people coming down just to enjoy the sights, the sounds the fellowship, one of the most diverse crowds that you will ever see a music event in Huntsville.

“And as we saw this event grow over the years, we also saw our sponsorship grow as well. Tremendous support from Lexus of Huntsville, that was our anchor sponsor for four years, and we valued and appreciate their help and we could not have done it without them. And every other sponsor who came on board. We’ve had sponsors from the business community, sponsors from the non-profit community sponsors from the ‘Here, I’m a person who wants to pour into this event and make it successful.’ And so there’s been a community effort. We’ve had grants that have helped us do this. It’s just been a total community collaboration to make jazz in the park successful.

“And now, in our fifth year now, even though we’ve been impacted by the pandemic we had to cancel the event in 2020, we’re doing a virtual event in 2021 with the hopes of being able to expand our concert series in 2022. We have increased from that first night of 800 people out there in Big Spring Park East to now crowds of somewhere between 5,000 and 6,000 people, energized with their families, and I mean truly families, they’re bringing their children out, there are food trucks, there are exhibitors, there are all kinds of local organizations that come to be a part of this event and we could not be more honored to have this as a staple of our community as one of the most significant music festivals taking place right  here in  Huntsville, largest city by the way in the state of Alabama.”

Mr. Anderson also reflected on the life of Bernard Lockhart and the legacy he leaves behind

“I learned a lot from Bernard Lockhart, the founder of Magic City School Jazz. Over the years, as I sort of worked under his wing. He took me under his wing. He shared his brand with me. Something that people don’t ordinarily do, but we were like-minded in so many ways. We were about taking care of the business. We were about high-quality performances. We were about being professional in everything that we did, offering the highest level of customer service, because we saw Jazz in the Park as more than just an event, it was an experience.

“And so we wanted people to come out to the park free of charge, have a high quality, first-class music experience, and then go out and tell the world about it. And we were very successful with that, year after year after year. And I watched Bernard handle his business, he taught me a lot about the promotion aspect of doing concerts, the business management aspect in terms of the finances and more, and tragically, we lost Bernard in December of 2020 to the COVID pandemic. Bernard’s loss, Bernard’s loss was tremendous. Many people have just reflected on the gap that his loss now leaves, in terms of his mission his vision, and the investment that he made for so many years in Magic City Smooth Jazz, over a decade of doing that tremendous work on the ground.

“And as I said, Jazz in the Park was not just an event, it was really tied to the whole notion of investing in this next generation of young people, students. So, music education was at the forefront of everything that Bernard thought about. And I learned that from him as well. So that as we invited headliners to our community, we didn’t just want them to perform on that beautiful Sunday night at the park. We wanted to also say, would you stay over an extra night, would you go into the school system would you connect with young people who are musicians who may want to do something like your doing one day, and even if they never want to do that, then we can connect them to these chart makers.

“We’ve had Grammy award winners perform, and these are people that they would probably never get the chance to get that close to were it not for the fact that we were providing this opportunity. So, Bernard’s legacy is strong, and it lives strong in me and everyone else who’s a part of this. As we move this brand forward, I am committed to honor his legacy, which I believe is his commitment to excellence, the idea that he wanted to have a commitment to education and making sure that these music education master classes continued. We intend to do that.

“We intend to launch a scholarship in Bernard’s name that will allow students who are interested in majoring in music education or music performance to go to college, and we want to work with our local school system on that as well. We’re excited about the future, and the fire that Bernard lit so many years ago that we’re now able to carry that torch forward in his honor and in his memory and continue to make sure that his legacy will be lived and never forgotten.”