On the first night of Passover, the Etz Chayim Synagogue was vandalized with what's being described as hate speech. 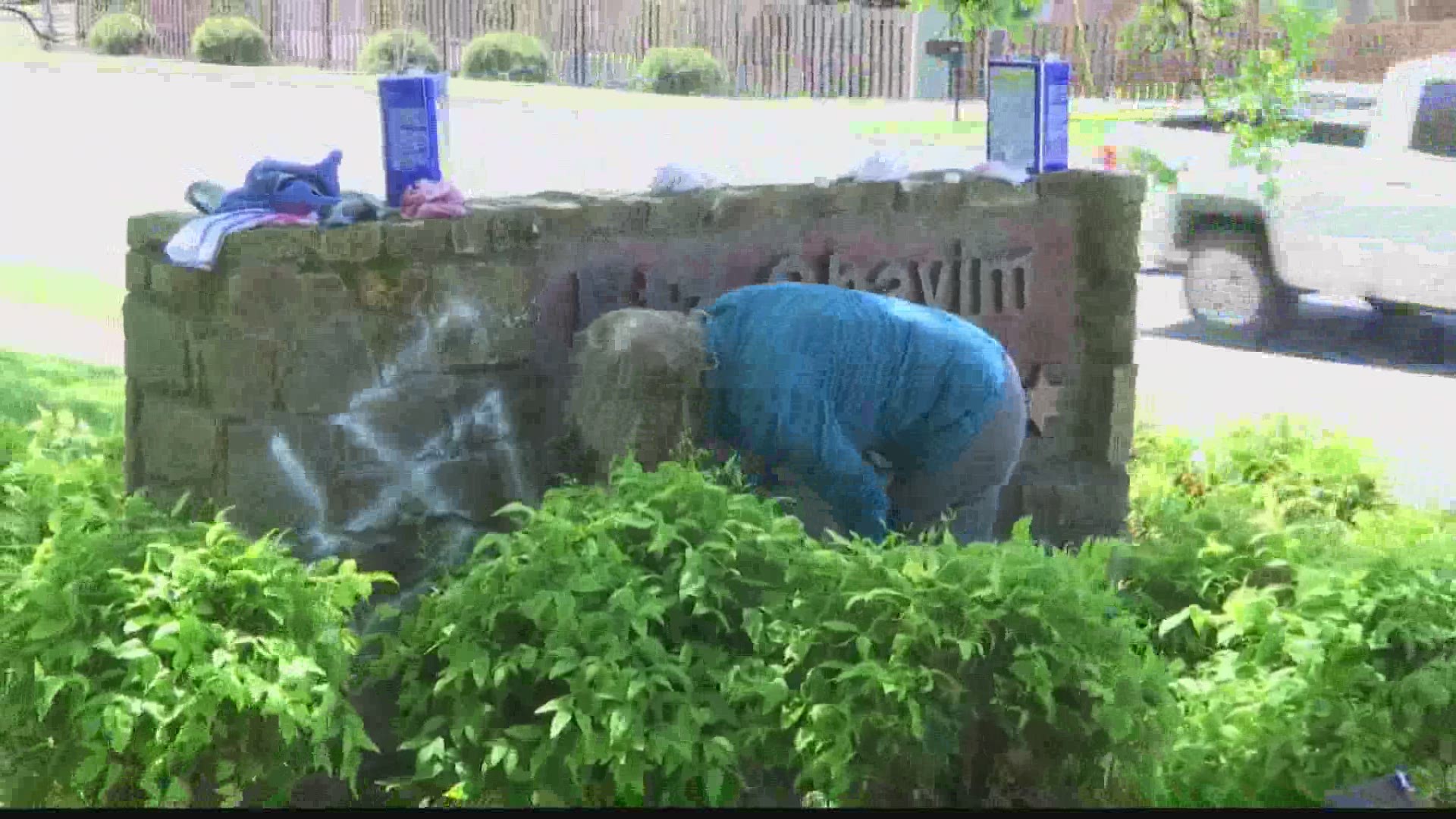 HUNTSVILLE, Ala. — On the first night of Passover, the eight-day festival commemorating the emancipation of the Israelites from slavery in ancient Egypt, Huntsville's Etz Chayim Synagogue was vandalized by anti-Semitic graffiti, including swastikas.

Numerous people posted online about driving by the synagogue and seeing a heavy police presence in the parking lot, along with the graffiti.

Community members across faiths came together to clean up the hateful words and damage.

Rust Nelson tells our reporter, “Anti-semitism is still in our nation. It comes out in moments like this.” We spoke to Pastor Rusty Nelson, of The Rock Family Worship Center. Nelson is among a group of locals who came out to help clean up the hate speak graffiti. He says, “Well, it broke my heart. Hatred runs deep.”

Swastikas and other anti-semitic messages spray painted on the synagogue’s front doors, driveways, faces of the building and even the sign out front.

But, community members of all faiths and backgrounds say they’re stopping at nothing to lend a hand to help their neighbors clean up. Nelson says, “There’s a gentleman here, Dave, who has worked for the members of this synagogue for many years. I think he told me over 30 years. So he was already here working... To see the community coming out and already discarding the symbols of hate, is a wonderful thing.”

Neighbors made their way over to ask what happened and help paint over the messages. Nelson adds, “We can do a lot when we serve together, when we work together, when we love and care for one another together.”

They say showing up to help sends a much more powerful message than the vandalizers ever hoped to send. Nelson says “It’s times like this when we can come and make a statement, make our voices heard. ‘Not on our watch.’ We’re going to stand in solidarity with the Jewish people.”

Locals are using this act of hate to support each other with love. They say it’s disheartening because during this time, everyone in the community has been pulling together.

Nelson says, “During this virus, we all may have been isolated in our home. But we all started to become part of this area, this community.

Volunteers say these messages of hate won’t divide them any time soon.

If you have information about the vandalism, contact Huntsville police at (256) 427-7009

WZDX will bring you more information on this breaking story as it becomes available.

To the best of our knowledge, only the exterior of the building was vandalized with swastikas and other hate speech. We are learning more as the situation develops. When and if appropriate we will share additional information. When we know how we can help Etz Chayim we will share that information.

We have already contacted Huntsville Police to station an officer and police car at the Temple this evening, and to step up patrols of Temple B’nai Sholom today, tonight and over the next few days.

We offer our love and our support to the families of Etz Chayim. We may be different congregations, but we are all part of the greater Jewish Community of Huntsville, Alabama. We stand together united against all forms of antisemitism and hate speech. We are still one people.

Other local faith groups shared their support for the synagogue.

“The City of Huntsville condemns anti-Semitism in the strongest possible terms. This despicable act took place on the first night of Passover, one of the most important religious times in the Jewish year. We seek to find those who perpetrated this crime, and I urge anyone with information about the vandalism to report it to police. As a City, and as an inclusive community, we stand side by side with our Jewish brothers and sisters and people of all faiths. Any offense against one is an offense against all.”

Overnight on Passover, local synagogue Etz Chayim on Bailey Cove Road was vandalized with hate speech. Trinity is outraged at this act of hate in our community. We stand in solidarity with our Jewish friends in the Huntsville community and around the world. As we learn of ways to help, we will let you know.

The Dwelling Place Church in Huntsville offered the following on their Facebook page:

The Interfaith Mission Service in Huntsville offered the following on their Facebook page:

Aldersgate UMC in Huntsville posted the following statement on Facebook:

Laura King, past president of the Jewish Federation of Huntsville and North Alabama, told Southern Jewish Life magazine that there have been numerous offers of assistance from the Christian community.

Volunteers were out cleaning up by late Thursday morning.