The Austin Fire Department said in the last 10 days, it has responded to nearly 2,500 calls regarding broken water pipes. 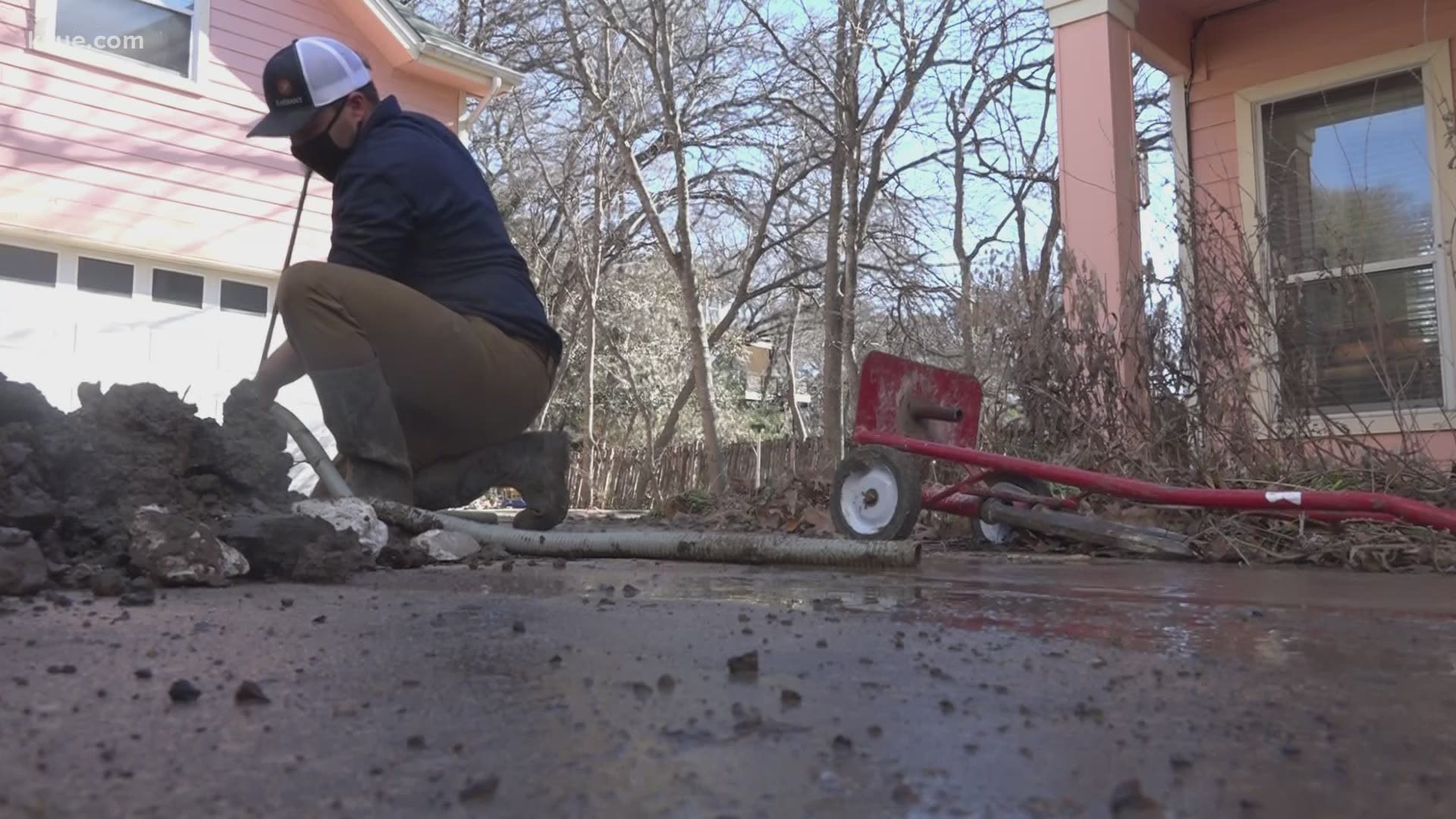 AUSTIN, Texas — Plumbers throughout the Austin area and Texas have been working nonstop since the weather cleared up enough to make it out to places that have broken water pipes.

That's been the case for plumbers like Tyler Blanchard, a technical lead for Radiant Plumbing and Air Conditioning's plumbing teams.

"Absolutely wild," Blanchard told KVUE Monday. "We couldn't get our trucks on the road. We were getting slammed with calls and the weather was so bad ... So, we were taking some – we were taking virtual calls, trying our best to help people get their water shut down."

Blanchard has been working on calls throughout the weekend and into this week. The Austin Fire Department said between Feb. 12 and Feb. 21, it has responded to 2,449 calls regarding broken water pipes.

"I know we had a pretty hard freeze in 2011 and it, you know, most of these units made it through. I think the main thing that got everybody on this one was the loss of the power," Blanchard said. "The power going out was was a big deal. No heat and keeping these pipes warm, [it] ended up causing a lot more bursts than normal."

Take a look at our call volume for the past 10 days...and your Austin firefighters didn't miss a beat! #ourmissiongoesbeyondourname https://t.co/DwwiWZnaER pic.twitter.com/zRp5CQUI5x

Water main breaks have also been causing the influx of calls for plumbing crews.

At a press conference on Monday, Austin Water Director Greg Meszaros said there have been more than 100 water main breaks.

"That's a very large number, probably 10 or 20 times more than we would be experiencing at this time of year," Meszaros said. "And I think as we look back on this event, we're going to find that it was the preponderance of all of these public and private breaks that was really the main cause of our system draining out of water."

He added that Austin Water estimates there were probably tens of thousands of private breaks, which would be at places like homes and businesses.

In a Feb. 18 interview with KVUE, Daniel Lawlis, a plumber of 24 years and the owner of Daniel's Plumbing, said his company scheduled out 200 calls and didn't answer or rejected 800 others.

"Once it thaws out, then [people will] realize they have a leak. Instead of having 800 calls that we couldn't answer today, we'll have, you know, probably 2,400 calls," Lawlis said.

As for Blanchard, he said plumbers are doing everything they can right now.

"It's tough," he said. "We're trying our best. All of us are working as hard as we can as long as we can. We're also fighting material shortage. We're trying to get out there at this point. We just got to be patient."

What you need to know before you apply for FEMA money