Athens Main Street leaders says they're in the construction phase of "Merchants Alley." 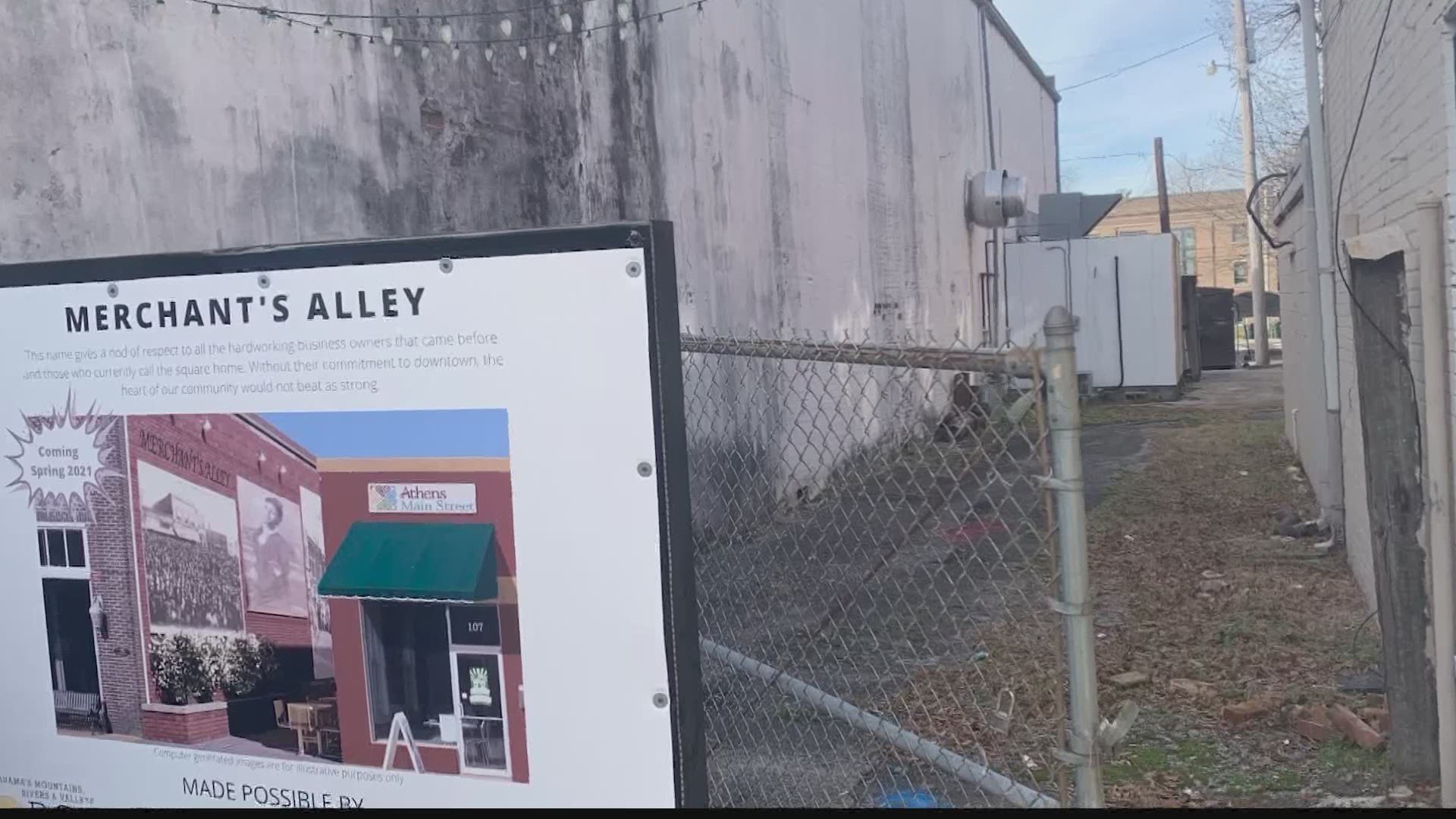 ATHENS, Ala. — Big changes are coming to Downtown Athens as leaders announce a new revitalization project.

Athens Main Street leaders says they're in the construction phase of "Merchants Alley."

Leaders say it will be a "gathering spot" for outdoor dining, impromptu music performances, and free WiFi around the square.

According to leaders, "this project will improve this alleyway in the heart of downtown Athens, between 107 N. Jefferson St. and 105 N. Jefferson St." The alley connects North Jefferson Street with public parking on Market and Madison Streets.

"We could not do the revitalization that we are doing now without the support of two important groups and their leaders. The Limestone County Commission, and their chairman Collin Daly - City Council, and the Mayor Ronnie Marks," says Athens Main Street Executive Director, Tere Richardson.

Leaders say the project is expected to be completed by early summer.

More details are below:

Placemaking projects provide interesting and inviting spaces downtown to sit, gather, and actively experience spaces. Athens Main Street is a believer in the importance of placemaking in downtown Athens. We have partnered with several organizations, including The Exchange and High Cotton Arts, in short-term projects such as the creation of pop-up parks and window galleries.

The next placemaking effort will be a long-term project. Athens Main Street is embarking on the revitalization of an alley central to downtown.  The vision is to create a gathering spot for people of all ages to take advantage of the free Wi-Fi around The Square, provide more space for outdoor dining, allow impromptu music performances, and most importantly give visitors a place to engage with each other. This project will improve this alleyway in the heart of downtown Athens, between 107 N. Jefferson St. and 105 N. Jefferson St. The alley connects North Jefferson Street with public parking on Market and Madison streets.

Specifically, Athens Main Street will create a series of murals -- works of art that will engage in a multitude of ways, tell a story and enhance our identity. We will replace the hardscape walking surface with a vibrant pedestrian corridor linking the municipal parking lot and the core of Downtown, thus encouraging visitors to spend more time walking and interacting. Our design for landscaping and furnishings will promote gathering on a small public scale.

Currently, the alley is owned by Derrick Young, owner of UG White. Young has long been a strong supporter of downtown revitalization and growth. Young plans to work with the team on this project.

When asked about the project, Young stated, “Bringing this alley to life and making it a place to enjoy for all our community will be a real pleasure. In naming the alley 'Merchants Alley,' we wanted to give a nod of respect to all the hardworking business owners that came before and those who currently call The Square home. Without them and their commitment to downtown, the heart of our community would not beat as strong.”

The project is made possible through public/private partnerships of donated funds and in-kind donations from many sources.  Athens Main Street extends a special thank-you to Alabama Mountains, Rivers and Valleys Council; Athens Rotary Club; Limestone Area Community Foundation; DEKKO Foundation; Athens-Limestone Beautification Board; the Mayor’s Youth Commission; and a number of private donors.

Planning and design began in September, and construction is scheduled to begin before the end of the year. The project is due to be completed in early summer 2021.

As the mural theme takes shape, Athens Main Street Executive Director Tere Richardson encourages artists to be on the lookout for opportunities to add their mark to Merchants Alley.