Artist struggles to get ‘Black Lives Matter’ mural approved in Huntsville: Mayor Battle says "it’s a good kind of no" in radio interview

With plans of ‘Black Lives Matter’ street murals approved in other Alabama cities, how likely is it that we’ll see one in Huntsville? 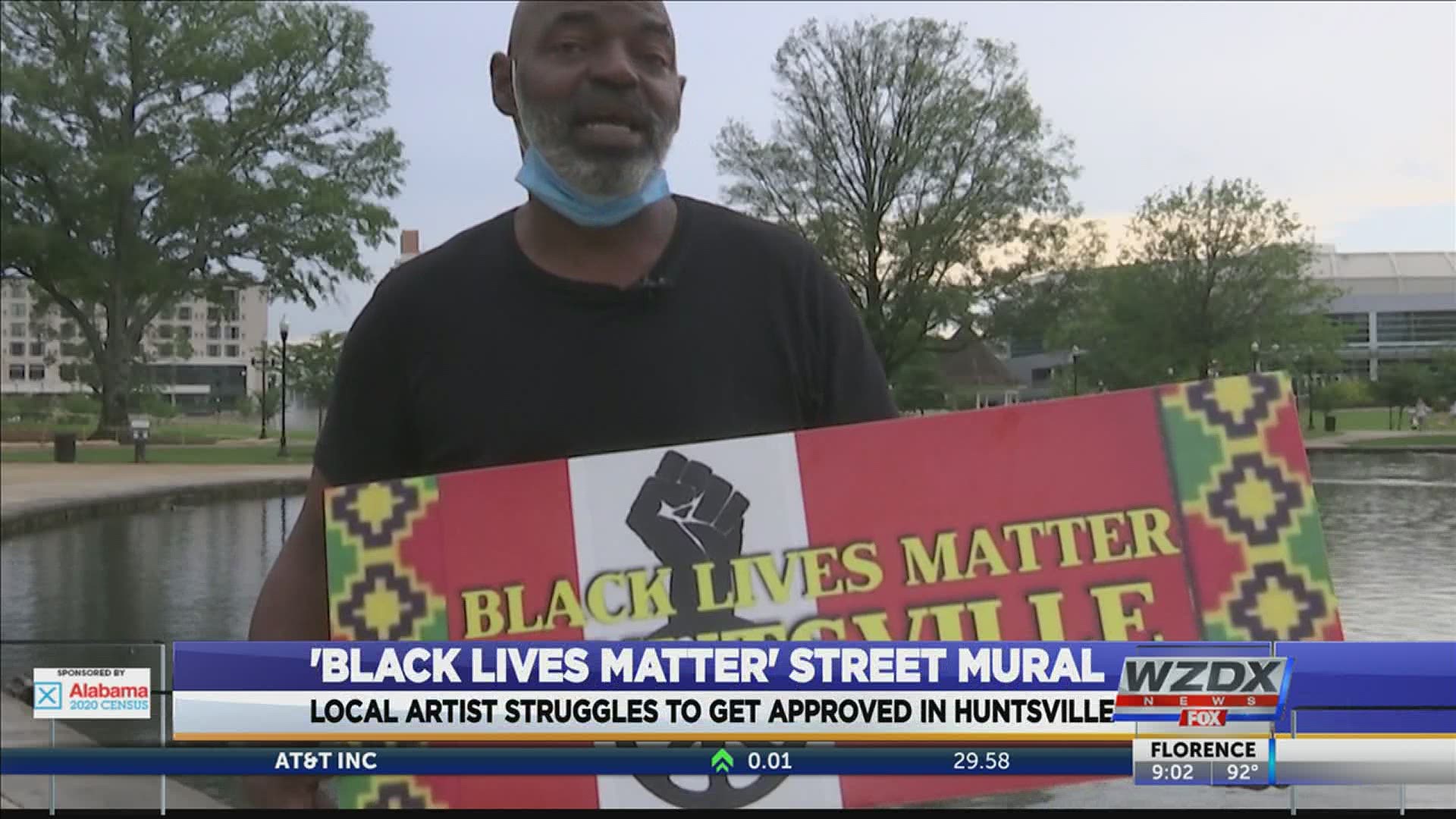 HUNTSVILLE, Ala. — With plans of ‘Black Lives Matter’ street murals approved in Birmingham, Mobile and Tuscaloosa, how likely is it that we’ll see one in Huntsville? Well, according to a local artist behind a newly proposed Huntsville mural, the process hasn’t been easy.

Based on comments made during a recent radio interview, Huntsville Mayor Tommy Battle does not plan on putting a process in effect to enable the art’s installation.

Major cities across the country have been painting their streets with a common message: Black Lives Matter. One local artist is trying to do the same thing here in Huntsville. But, he says he’s been receiving some pushback.

Renzie Wilson is the artist of the "Black Lives Matter Huntsville" mural and local activist. He says,“The message it would send is a message of unity, hope, togetherness-- where you can come and live your life and not worry about your skin color.”

Wilson goes on to explain how each element of the mural was chosen and what the colors represent. He says a mural like this one is necessary, and walks us through the steps he’s taken to try to get it done. He adds, “Initially, I proposed the mural in June to Mayor Tommy Battle, in an email. His office did contact me and they referred me to the Huntsville Arts Council.”

Wilson says after meeting with the director of the council, he was told the mural qualifies as artwork. Wilson tells our reporter, “Allison Dillon-Jauken, who is the director of the council, in a meeting she told me that the art council had approved my commission-actually had approved my mural for painting...because, It’s more issue based, and not politically based.”

But, Wilson says, after meeting with Huntsville city planner, Dennis Madsen, he was told state laws prohibit the painting of this mural on any street. He asks in response, “If it was a state law that we couldn’t do this mural, then why does Birmingham, Montgomery and Tuscaloosa have one?”

Renzie Wilson says he’s worried city leaders have no intention of walking him through the proper steps to get the street mural approved.

We came across an interview Mayor Battle did with Dale Jackson on WVNN radio this week. Here’s a transcription of a segment of the conversation:

At 19:40 into the interview, Mayor Battle explains that there have been a number of requests for street murals.

Dale Jackson/ radio host: “You’re not giving me a definite no. But, you’re giving me a kind-of a no.”

Voice of Mayor Tommy Battle/ Mayor City of Huntsville: “And streets were made for driving on.”

You can listen to the full interview by clicking here.

The Mayor’s office could not be reached for comment.