The Alabama House debated medical marijuana for over nine hours without ever getting the issue to a vote. 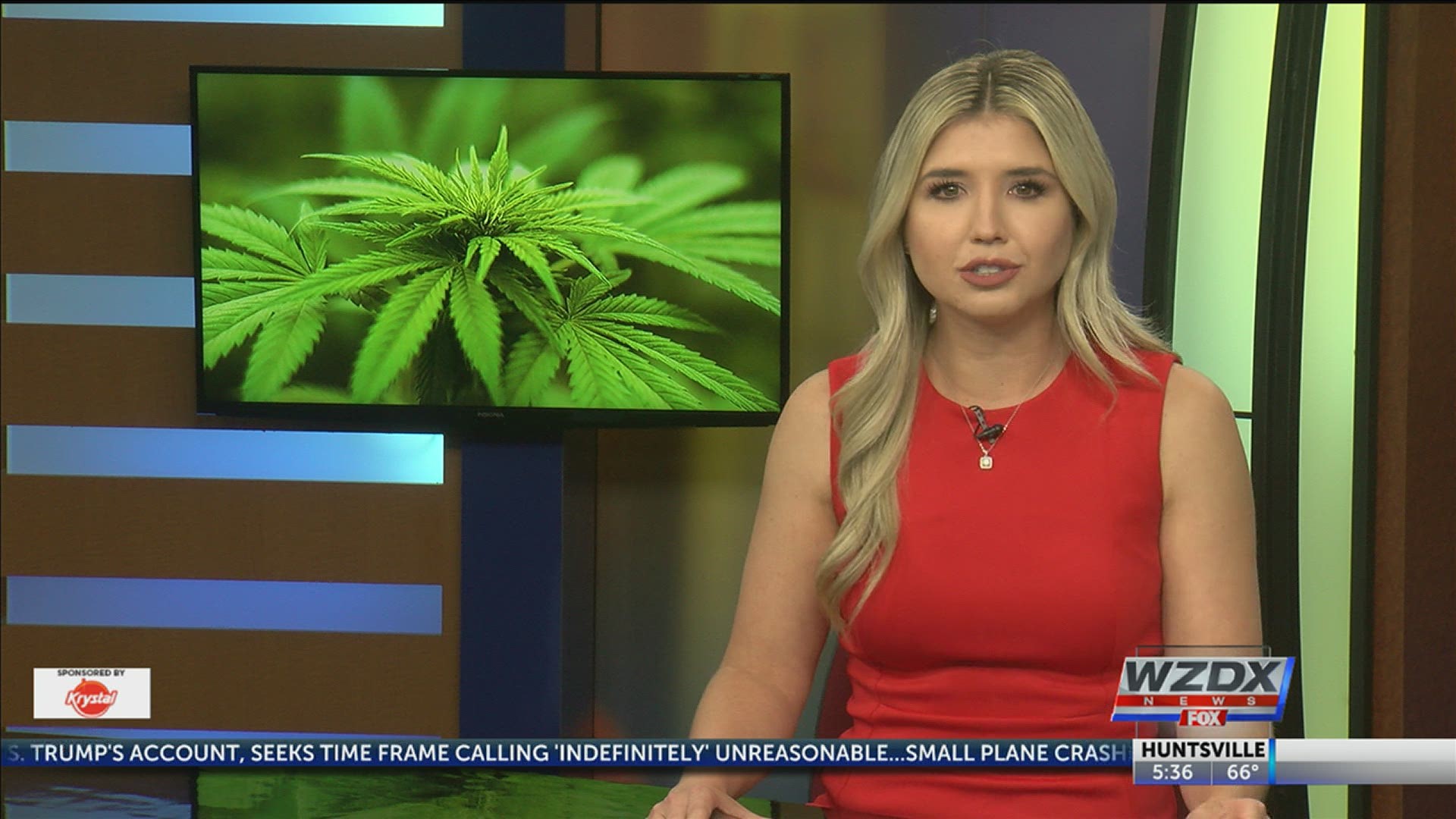 MONTGOMERY, Ala. — The Alabama House of Representatives on Tuesday debated legislation to make medical marijuana legally available in the state of Alabama for the first time in a century. The legislation was filibustered for more than nine hours by a group of about 20 conservative Republicans who vehemently oppose the legislation, led by state Rep. Jim Carns, R-Vestavia.

Senate Bill 46 is sponsored by Sen. Tim Melson, R-Florence, and carried in the House by state Rep. Mike Ball, R-Madison, who carried this on the House floor.

“I spent a career in law enforcement,” Ball said. “In 2013, I got an email that changed my life forever.”

It was a letter from a grandmother asking Ball to support medical marijuana to help her granddaughter with severe seizures from epilepsy.

“One thing I knew is that people who do this should never be held criminally liable,” Ball said of parents who obtained medical marijuana or CBD for their afflicted child. Ball said that when he introduced his first bill “you would have thought that I was opening the gates of Sodom and Gomorrah.”

Ball said that failed, but it did morph into Carly’s Law, which established a UAB study that allowed qualified epileptic afflicted children to obtain CBD oil.

“It really did grieve my heart,” Ball said of when he learned that Leni Young’s family had to leave the state because she did not qualify for the UAB study. So he sponsored and passed Leni’s Law.

“All Leni’s law did is that say if someone possessed the oil for certain diseases,” Ball said. “Decriminalization of low THC oil. Very, very low levels of THC. … Since we passed Carly’s and Leni’s Law, CBD is now legal and sold over the counter.”

Ball next brought up medical marijuana. That bill failed, but he got Melson to carry the bill in the Senate.

“I knew when I handed this to Senator Melson in 2019 that he had a better chance of passing this as he was a doctor,” Ball said. “This is not my bill; this is Senator Melson’s bill.”

“You have to have controls in place,” Ball said. “I looked for the best possible bill and looked across the country. This bill is based on a bill by Janet Boling in Tennessee. She is a lockdown, dyed-in-the-wool conservative.”

“This debate is not about medical marijuana it is about a gateway bill that will lead to recreational marijuana,” Wheeler said to the body. “SB46 devotes over 60 pages to the establishment of a medical cannabis convention, but only seven lines on product quality and testing.”

“This adds a large bureaucracy to our state that duplicates many of the functions of FDA,” Wheeler said. “This legislation creates a registry with the names of every medical marijuana user in the state, that is supposed to private, but who believe that it will remain so?”

“Legalization of medical marijuana takes us down a slippery slope to recreational marijuana,” Wheeler said.

“My dad died while I was a member of this body. He had lung cancer that spread to his brain,” said Ralph Howard, D-Greensboro. “People came to me and my sister and suggested that we give him marijuana to ease his suffering. I cannot believe that people come down here and tell us how to care for our dying loved ones.”

RELATED: Pardons issued in Birmingham, AL for more than 15,000 convicted of marijuana possession

State Rep. Reed Ingram, R-Montgomery, said that he grew up in poverty due to his mother’s drug abuse, was homeless for a time and did not go to high school.

Ingram wanted to amend the bill to prevent it from becoming a gateway to drug abuse.

“I am not trying to kill your bill, but as it is now, it is not a good bill,” Ingram said.

Rep. Juandalynn Givan, D-Birmingham, said: “Not one single person who has come up here has found a cure for the illnesses that this particular bill will provide.”

“We need to do something,” Givan said. “I think this is a good start.”

‘The important thing about this bill is that it creates a commission that gives licenses for this industry,” Ball said.

Ball was asked if Alabama hemp farmers would automatically be allowed to transition to growing marijuana.

“No, they will have to go through a separate process and then have to go to the commission,” Ball said.

“30 percent of the profits from this will be spent on research,” Ball said.

Rep. Ben Robbins, R-Sylacauga, wanted to amend the bill to take 15 percent of those funds and redirect them to rural healthcare.

“We don’t need research,” Robbins said. “Is it about the money?”

“This is not about money,” Ball said, “In fact, money is a nuisance to me. This is about helping people with a medical need.”

“I do not agree with everything in the bill, but it is a start,” Givan said.

Rep. Tommy Hanes, R-Bryant, asked: “Why do we need this? Can’t people get these benefits from CBD?”

“The hemp plant has THC in it; but very, very low levels. In some cases, it will help some; but there are times that it is not sufficient,” Ball said.

“If this passes, it will not end here,” state Rep. Tracy Estes, R-Winfield. “Give the devil an inch, and he will take a mile.”

“My father died of alcoholism,” said Rep. Ritchie Whorton, R-Huntsville. “Can you get high from medical marijuana?”

“It depends on the dosage,” Ball said. “Medical cannabis would have controlled doses. This would not compare to the high of someone smoking illicit marijuana.”

“We are talking about smokables,” Ball stressed. “It is very difficult for them to get the level of THC that they can get from a bag of pot illegally on the street.”

RELATED: Bill that would have legalized medical marijuana in the state fails in Tennessee Senate

Whorton expressed concerns that as an employer that his employees could drive a company truck home and be impaired from medical marijuana and hurt someone in a wreck.

“You can let them go, under this bill, if you don’t want them to have it,” Ball said.

“We live in a country where almost 17 veterans commit suicide every day,” said Rep. Ralph Howard, D-Greensboro. “There is a lot of research that medical marijuana helps with PTSD and also with depression.”

“Twenty-three out of the 55 the elected DAs in the state signed a letter opposed to this bill,” Carns said. “They deal with this stuff daily. They see what this does.”

“We are setting up an alternative healthcare delivery system outside of the FDA,” Carns said.

“I would have preferred for CBD to have been more regulated,” Ball said. “This puts a structure in place.”

The Judiciary Committee substitute was adopted on a 71 to 20 vote. The House next debated the 10-page House Health Committee amendment.

“Why are we having to do this?” asked Rep. David Standridge, R-Hayden. “Why are put in this position?”

“The gross overreaction by the federal government has handcuffed doctors and held back medical research,” Ball said.

“What we are doing today will have a big effect on the future of Alabama, and it is hard to see the future,” Standridge said.

State Rep. Rich Wingo, R-Tuscaloosa, said that “people with a history of heavy cannabis use have a higher risk of death.”

Wingo thought the list of qualified medical conditions was overly broad, including the people suffering from a terminal illness.

“We are all terminally ill. We are all going to die from the day that we are born, that language needs to be better defined,” Wingo said.

Rep. Charlotte Meadows recounted the deaths of beloved Auburn University athletics radio announce Rod Bramlett and his wife. “The 16-year-old that hit them was driving under the influence of marijuana.”

“The 16-year-old that did that and people like them that abuse drugs — those people get what they want now,” Ball said. “If I thought that this bill would increase access for people like that, who don’t care about anyone else, I would not have brought this bill this far. People who are like that can get the drugs that they want right now.”

“Time after time after time. states that went down this road wound up with recreational and that is a road that I am not prepared to go down,” said Rep. Russell Bedsole, R-Alabaster.

Marijuana opponents debated the medical marijuana bill for more than nine hours, including even filibustering the special order calendar from 2:30 p.m. until time ran out on the 28th legislative day at the stroke of midnight.

“I guess we are still in the process of debating,” Carns said.

At midnight the House was still debating the motion to adopt the Health Committee amendment. That has to pass before the House can begin to debate the final passage.

“37 states have already done this,” Melson told reporters. “I have no doubt that it is going to pass if it is given a vote on the floor.”

Speaker of the House Mac McCutcheon, R-Monrovia, told reporters that the Legislature will take up the medical cannabis debate again on Thursday, May 6, 2021.

Carns said that he intends to continue his filibuster of the legislation. The other 21 bills on Tuesday’s special order calendar were never addressed.

The filibuster of SB46 will be followed by the gambling bill on Thursday. Thursday will the 29th legislative day of the 2021 Legislative Session.

This story was originally published at alreporter.com.