COVID hospitalizations are down, but new daily cases remain high, and two hospitals are out of monoclonal antibody treatments. 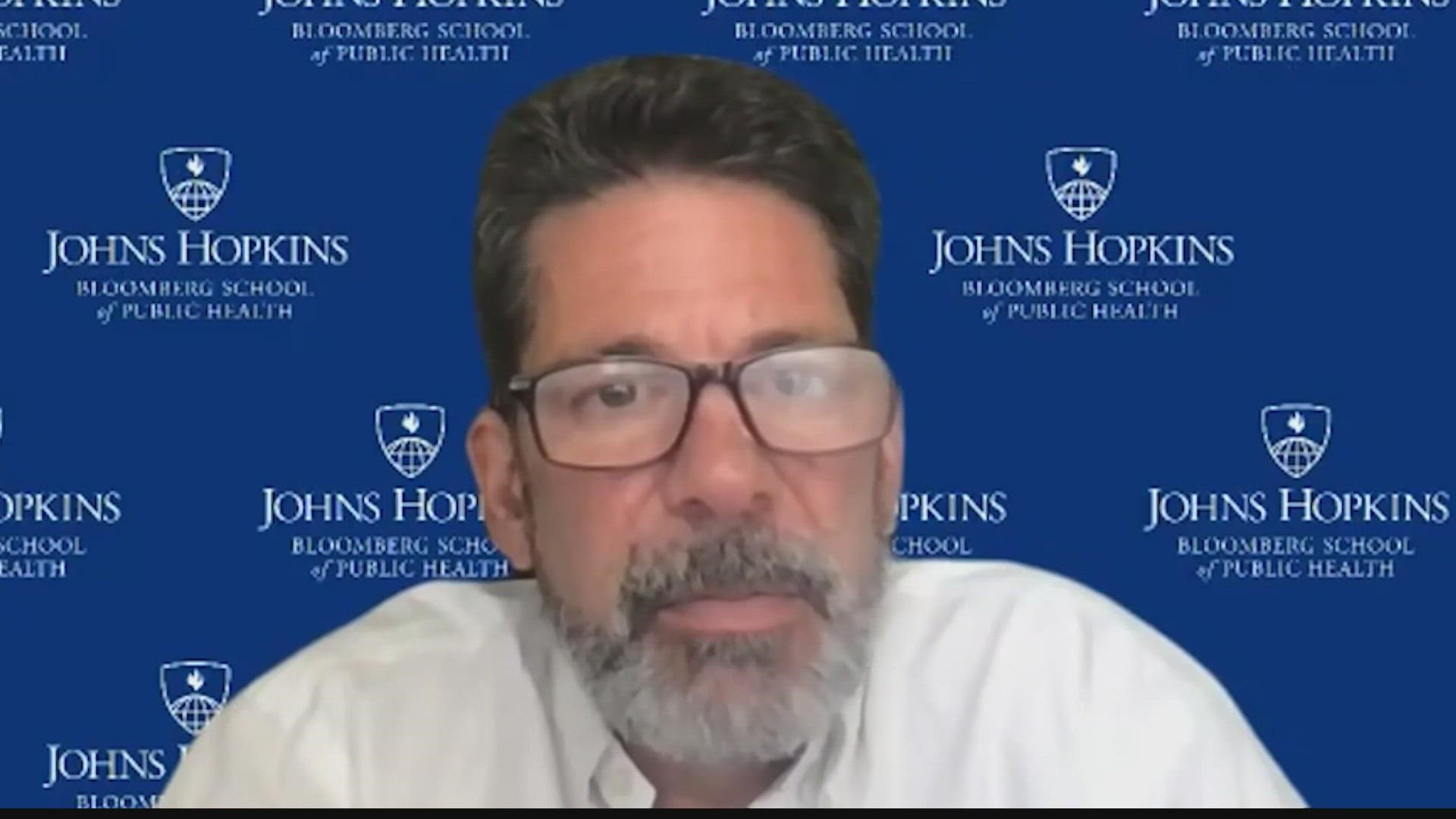 MONTGOMERY, Ala — In Alabama, one in every 390 residents has died of COVID-19, a grim milestone that eclipses the one in 500 who have died of COVID nationwide, and an indication that the state’s low vaccination rate is having deadly consequences.

Early on during the pandemic, it was common to hear people say they knew of no one who had died from COVID, but less so now, as the more contagious delta variant has combined with Alabama’s low vaccination rate and rampant misinformation about the virus, spreading like the virus itself on social media and among family and friends.

Alabama has the eighth-highest death rate in the nation, according to an analysis by The Washington Post.

Alabama’s COVID-19 hospitalizations have been declining — the number dropped 21 percent in the last two weeks, down to 2,223 on Thursday — but some of those beds opened up due to a greater number of deaths in recent weeks.

Dr. Don Williamson, president of the Alabama Hospital Association and former state health officer, told APR on Thursday that the state hospitals have been reporting on average more than 40 deaths a day for the last three weeks.

“If you assume that these are people who got infected, probably in mid-August and their clinical courses is just playing out. It’s just very sad,” Williamson said.

In the 10 days ending Wednesday, state hospitals reported 560 COVID deaths and an average of 56 deaths daily during that time, according to East Alabama Health, which gets data from the Alabama Hospital Association. It takes the Alabama Department of Public Health time to review medical records and confirm those deaths, so the state’s death total lags actual deaths.

As of Thursday, there have been 12,856 confirmed COVID deaths in Alabama, according to the Alabama Department of Public Health.

In the U.S., 667,359 people have died of COVID as of Thursday, according to Johns Hopkins University.

The state’s average percent of COVID tests that were positive over the week ending Wednesday was 18.5 percent, which is a drop from the all-time high of 23.1 percent on Aug. 8.

“It’s still three times or more than what it needs to be, but it’s better than it was,” Williamson said. Public health experts said the percent positivity needs to be at or below 5 percent or cases are going undetected.

Williamson is also concerned that the state’s daily case count remains “stubbornly high,” with the Alabama Department of Public Health reporting a seven-day average of new daily cases above or close to 4,000 cases for the last two weeks.

“We’re still stubbornly hanging on to high numbers in the ICU’s and on ventilators, and we still are in negative ICU territory,” Williamson said.

Alabama hospitals had 11 fewer ICU beds on Thursday than patients needing that care, meaning some were awaiting that critical care in other areas of hospitals.

Worrying also is Alabama’s low vaccination rate, which state health experts say must increase or else the state will continue to see surges that drive hospitalizations and deaths.

Alabama has the fourth-lowest percentage of fully vaccinated residents in the nation, at 40.5 percent, ahead of just West Virginia, Idaho and Wyoming, according to the Centers for Disease Control and Prevention.

Williamson is also concerned that, due to a change in how the federal government is allocating shipments of the life-saving monoclonal antibody drugs to hospitals states with low-vaccination rates that have been using 70 percent of the U.S. supply of those drugs, some Alabama hospitals could see a rise in COVID hospitalizations.

One of those hospitals is Regional Medical Center in Anniston, which this week shut down the hospital’s newly-opened monoclonal antibody clinic at a former city school that had administered 202 infusions over three days.

“Unfortunately, the Health and Human Services, along with Alabama Department of Public Health, are now appropriating the monoclonal antibody treatments, and we have none at this present time,” said Dr. Almena Free, vice president of medical affairs and chief medical officer at Stringfellow and Regional Medical Center. “We’re working very diligently with the state and the United States, the government, to get more monoclonal antibody in this area.”

Alabama State Health Officer Dr. Scott Harris said the federal government informed the department that the change in the supply process would only last three or four weeks.

“ADPH is working with providers to implement the new process for ordering monoclonal antibodies and have requested that product be shipped as soon as possible,” said Nancy Bishop, state pharmacy director for the Alabama Department of Public Health, in a response to APR on Wednesday. “As expected, the quantity requested this week exceeds the amount allocated to Alabama by HHS. This is a weekly process so facilities that do not receive product this week may request it next week.”

Monoclonal antibody treatment, done largely by infusions, can cut the need to hospitalize someone with COVID by 70 percent, if given within 10 days of infection. Williamson said that treatment has likely had the biggest impact on reducing COVID hospitalizations.

“It’s creating quite a bit of turmoil,” State Health Officer Dr. Scott Harris said of the federal government’s decision to change monoclonal antibody treatment deliveries. Harris was speaking during a COVID discussion Thursday hosted by the Medical Association of the State of Alabama.

Dr. David Thrasher, a critical care pulmonologist in Montgomery, explained during the association’s discussion that when delta began raging the federal government told Alabama and other states to ramp up use of monoclonal antibody treatments to help prevent hospitalizations and death, and Alabama did just that, adding hundreds of providers who can administer the treatments.

“If it ain’t broke, don’t fix it. This system was not broken,” Thrasher said of Alabama’s monoclonal antibody treatment usage.

Thrasher said the federal government has said Alabama and those other six states would only be receiving 70 percent of the monoclonal antibody drugs providers had been ordering.

“That means 30 percent of people are not being treated, and some of them will die,” Thrasher said.

Dr. Michael Saag, a professor of medicine at UAB and a renowned infectious disease researcher, said during Thursday’s discussion that without the critical treatment, hospitalizations will increase.

“If we happen to run out at different hospitals, we’re going to see an uptick in hospitalizations because there’s no questions that the monoclonal antibodies keep people out of the hospital,” Saag said.

Alabama medical providers who administer monoclonal antibody treatments had little time Monday to react to the change. Dr. Harris said the call with the U.S. Department of Health and Human Services on Monday gave the state nearly no time to react.

“They told us at 4 p.m. that providers would no longer be allowed to order as of 5 p.m. the same day, so we had a one hour notice,” Harris said. “These hospitals and clinics that were going to put their order in at five minutes after five suddenly found out there was no way for them to do that.”