Mayor Greg Fischer's office said it will go into storage in anticipation of moving to Cave Hill Cemetery. 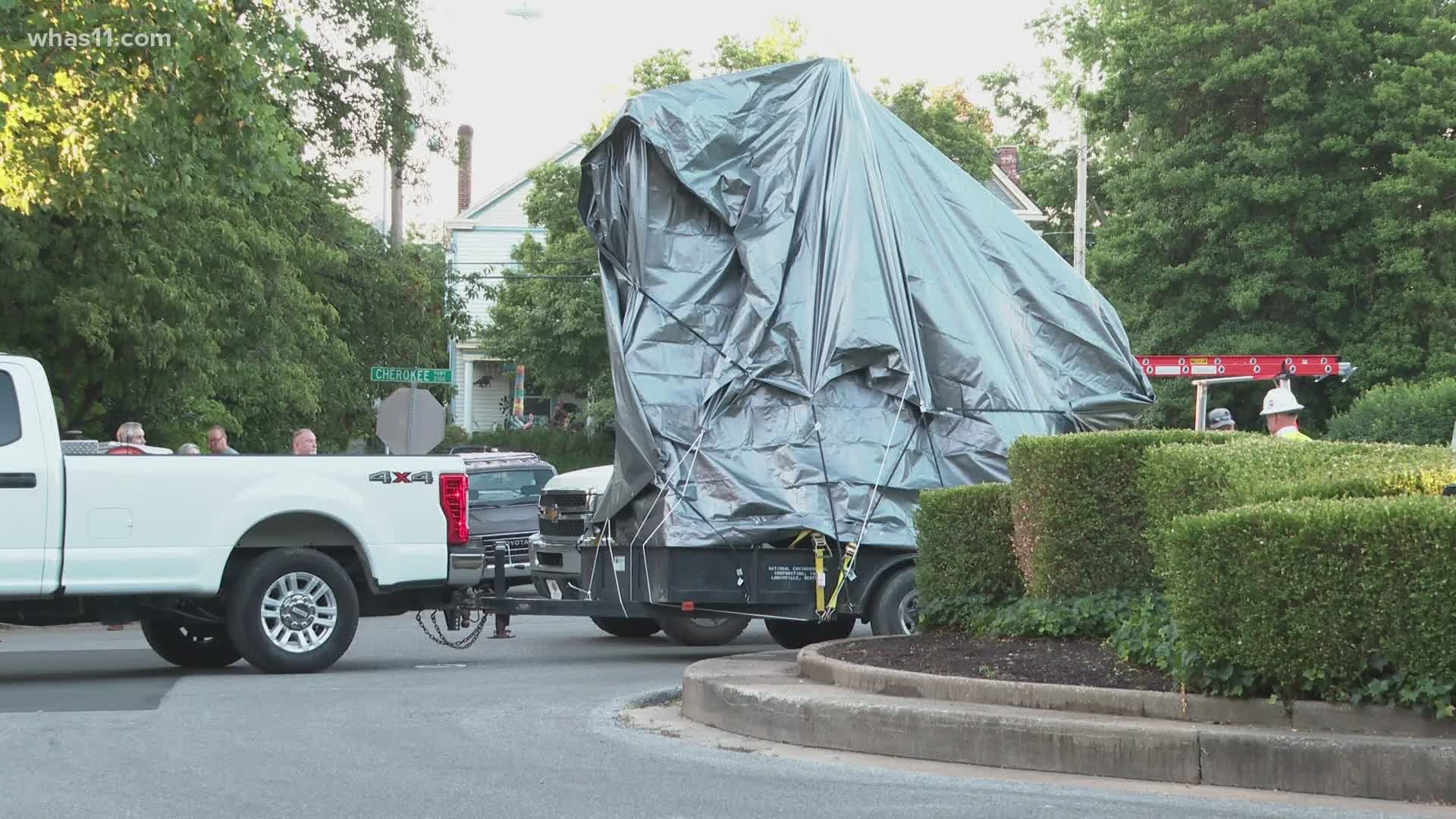 More than a year after the Landmarks Commission voted to remove the John B. Castleman statue from Cherokee Triangle, Louisville Mayor Greg Fischer's office said it is officially coming down.

Crews began taking the monument down at 6 a.m. after a Jefferson Circuit Court judge ruled Friday afternoon that the city has the right to remove it.

The statue will be moved to a city storage facility in anticipation of moving to Cave Hill Cemetery, where Castleman is buried.

Fischer first announced plans to move the monument in August 2018 after a report issued by the Public Art and Monuments Advisory Committee, however the Friends of Louisville Public Art appealed the decision to Jefferson Circuit Court.

The news of the statue's removal got mixed reaction.

"Too many people are suffering today because the promises of justice and equality enshrined in our Constitution are unfulfilled by a society that devalues African-American lives and denies African Americans justice, opportunity and equity," Fischer said. "That’s got to change. People want and deserve action. We need a transformation."

One neighbor we talked to said they were happy to see it go.

"The guy did some good things for our city’s parks, but you’re portraying him as a war hero in that statue and that’s not acceptable to me. When asked what would you like to see there? Given the climate, maybe some Black Lives Matter," the person said.

While another person in the area doesn't think removing the statue was the right thing to do.

'It was the life back then. If we don’t learn from history, good God help us all. This man helped establish our parks, if you wanted his statue taken down don’t go to the parks, don’t go to Shawnee or any of the parks Louisville offers. It’s crazy. It’s just wrong. It’s misguided. It’s a waste of time and energy and money. In regards to racism? Get rid of it-stop it. It wasn’t a perfect solution, he wasn’t going to win the war against racism back in the 1800’s but he was trying to give a solution to the problem back them. It’s a battle that’s been lost or won, depending on how you look at it."

The attorney for the Friends of Louisville Public Art said it plans to file a motion asking the Circuit Court to vacate its order, saying it failed to consider its argument that Louisville Metro employees in the Landmarks Commission and advisory committee who should have recused themselves from voting did not.

The mayor's office said no decision has been made on what will replace the statue.

Credit: WHAS
The pedestal where the John B. Castleman statue stood in Cherokee Triangle is now empty after the statue was removed early in the morning on June 8, 2020.

RELATED: Castleman statue still stands in Louisville amid calls for removal of Confederate monuments across the country