VERIFY: Are there long-term side effects from the COVID vaccines?

The majority of Americans who have not been vaccinated — or who say they are hesitant about vaccinating their children — report that safety is their main concern. 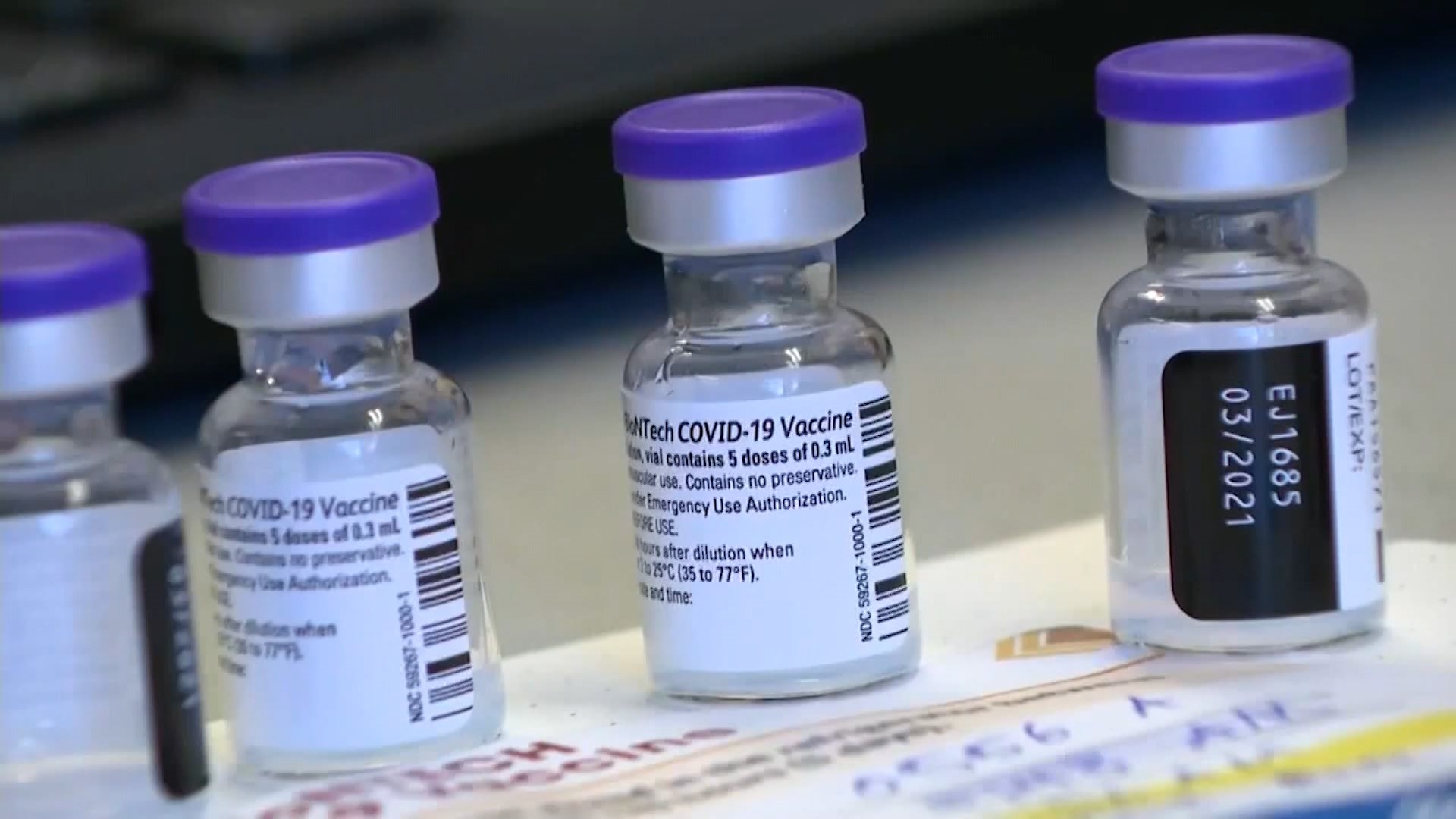 ALABAMA, USA — Are COVID vaccines safe? It's a question that scientists, researchers, and medical professionals are answering every day.

QUESTION: Are there long-term side effect to the COVID vaccines?

Statistics on adverse reactions are tracked by the CDC. Findings include:
Anaphylaxis after COVID-19 vaccination: 2-5 cases per million doses, or 1,655 reactions among the 331 million vaccines given as of July 10 (.0006%) Severe allergic reactions are not limited to COVID-19 vaccines; they can occur after any vaccine and are still exceedingly rare.

Thrombosis with thrombocytopenia syndrome (TTS) occurred in approximately 38 people out of 12.6 million doses of the J&J vaccine (.0003%).

Myocarditis and pericarditis (inflammation of the heart muscle and the sac around the heart muscle) has been reported in younger people who've gotten the vaccine at a rate of 13 per 1,000,000 vaccinations (.0013%).

How are vaccine side effects tracked?

Side effects from ALL vaccines are tracked by the VAERS (Vaccine Adverse Event Reporting System). Health care providers are required by law to report adverse effects that happen within a certain length of time after a vaccine.

See list of many of the reportable adverse effects here.

In his nearly 30 years studying vaccines, Paul Goepfert, M.D., director of the Alabama Vaccine Research Clinic at the University of Alabama at Birmingham, has never seen any vaccine as effective as the three COVID vaccines — from Pfizer, Moderna, and Johnson & Johnson — currently available in the United States.

Goepfert says we already know enough to be confident the COVID vaccines are safe. Here is why, starting with the way vaccines work and continuing through strong evidence from vaccine history and the even stronger evidence from the responses of people who have received COVID-19 vaccines worldwide over the past six months.

Unlike many medications, vaccines are generally one (or two)-and-done.

Unlike many medications, which are taken daily, vaccines are generally one-and-done. Medicines you take every day can cause side effects that reveal themselves over time, including long-term problems as levels of the drug build up in the body over months and years.

“Vaccines are just designed to deliver a payload and then are quickly eliminated by the body,” Goepfert said. “This is particularly true of the mRNA vaccines. mRNA degrades incredibly rapidly. You wouldn’t expect any of these vaccines to have any long-term side effects. And in fact, this has never occurred with any vaccine.”

That is not to say that there have never been safety issues with vaccines. But in each instance, these have appeared soon after widespread use of the vaccine began.

Side effects of COVID vaccines, if seen, are seen early on.

“The side effects that we see occur early on, and that’s it,” Goepfert said. “In virtually all cases, vaccine side effects are seen within the first two months after rollout.”

Vaccine distribution and experience for more than six months

The only vaccine program that might compare with the scale and speed of the COVID rollout is the original oral polio vaccine in the 1950s. When this vaccine was first introduced in the United States in 1955, it used a weakened form of the polio virus that in very rare cases — about one in 2.4 million recipients — became activated and caused paralysis. (Compare this with the 60,000 children infected with polio in the United States in 1952, and the more than 3,000 children who died from the disease in the United States that year.) Cases of vaccine-induced paralysis occurred between one and four weeks after vaccination. None of the COVID vaccines uses a weakened form of the SARS-CoV-2 virus — all train the body to recognize a piece of the virus known as the spike protein and generate antibodies that can attack the virus in case of a real infection.

The majority of Americans who have not been vaccinated — or who say they are hesitant about vaccinating their children — report that safety is their main concern. Nearly a quarter of respondents in Gallup surveys in March and April 2021 said they wanted to confirm the vaccine was safe before getting the shot. And 26 percent of respondents in a survey of parents with children ages 12-15 by the Kaiser Family Foundation in April 2021 said they wanted to “wait a while to see how the vaccine is working” before deciding to get their child vaccinated.

It is COVID infection, and the growing evidence of persistent symptoms from what has become known as “long COVID,” that are the most troubling unknown out there, Goepfert says.

“The long-term side effects of COVID infection are a major concern,” Goepfert said. “Up to 10 percent of people who have COVID experience side effects such as difficulty thinking, pain, tiredness, loss of taste and depression. We don’t know why that is, how long these symptoms will last or if there are effective ways to treat them. That is the most troubling unknown for me.”

Even as cases, hospitalizations and deaths have declined significantly in Alabama since January, there are still nearly 250 new COVID cases diagnosed and nearly 10 deaths reported statewide per day as of mid-June.

“Many people worry that these vaccines were ‘rushed’ into use and still do not have full FDA approval — they are currently being distributed under Emergency Use Authorizations,” Goepfert said. “But because we have had so many people vaccinated, we actually have far more safety data than we have had for any other vaccine, and these COVID vaccines have an incredible safety track record. There should be confidence in that.”

More background on our experience with vaccines

In 1976, a vaccine against swine flu that was widely distributed in the United States was identified in rare cases (approximately one in 100,000) as a cause of Guillain-Barré Syndrome, in which the immune system attacks the nerves. Almost all of these cases occurred in the eight weeks after a person received the vaccine. But the flu itself also can cause Guillain-Barré Syndrome; in fact, the syndrome occurs 17 times more frequently after natural flu infection than after vaccination.

“By the time the Pfizer and Moderna COVID vaccines were approved for emergency use in the United States in December 2020, we already knew the short-term side effects very well from the efficacy studies,” Goepfert said. “Pfizer and Moderna — and later Johnson & Johnson and then Novavax, which reported on its phase III trial results in June 2021 — all have enrolled 30,000-plus individuals, half of whom got the vaccine and half of whom got a placebo initially, after which all the placebo group got the vaccine.

The side effects seen in these studies, and again in the nationwide rollouts that began in December 2020, were tolerability issues, Goepfert says, mainly arm pain, fatigue and headache. These are seen in about one in 10,000 people, are very transient, and occur a day or two days after the vaccine. They then resolve quickly.

As of June 12, 2021, more than 2.33 billion COVID vaccine doses have been administered worldwide, according to the New York Times vaccinations tracker.

Goepfert says that, between December and June, we began to see the more-rare side effects that do not show up until millions of people have gotten the vaccine.

About one in 100,000 people receiving the AstraZeneca COVID vaccine have experienced a clotting disorder known as thrombotic thrombocytopenia, including 79 cases among more than 20 million people receiving this vaccine in the United Kingdom, and 19 deaths. A smaller number of cases have occurred with Johnson & Johnson’s vaccine as well, Goepfert says.

“The causes are still being worked out; but when this happens, it occurs from six days to two weeks after vaccination,” he said. “More recently, an even more rare side effect — myocarditis, or inflammation of the heart muscle — has been reported in people receiving Pfizer and Moderna COVID-19 vaccines. That is about one in a million, or possibly higher rates in some populations; but again, all of these occur no more than a month after the vaccination.”

Any risk is frightening, especially for a parent. But the rare side effects identified with COVID vaccines have to be weighed against the known, higher risks from contracting COVID, Goepfert says. It is not clear how COVID variants such as the highly infectious Delta mutation may affect patients. Early indications are that Delta infections bring more severe side effects than other forms of COVID, but that vaccines are still protective against Delta.

Portions of this story were originally published here.