Need to Know: How will the COVID-19 vaccine be distributed in Tennessee

Who will get the vaccine first in Tennessee? Where will people get the COVID-19 vaccine? 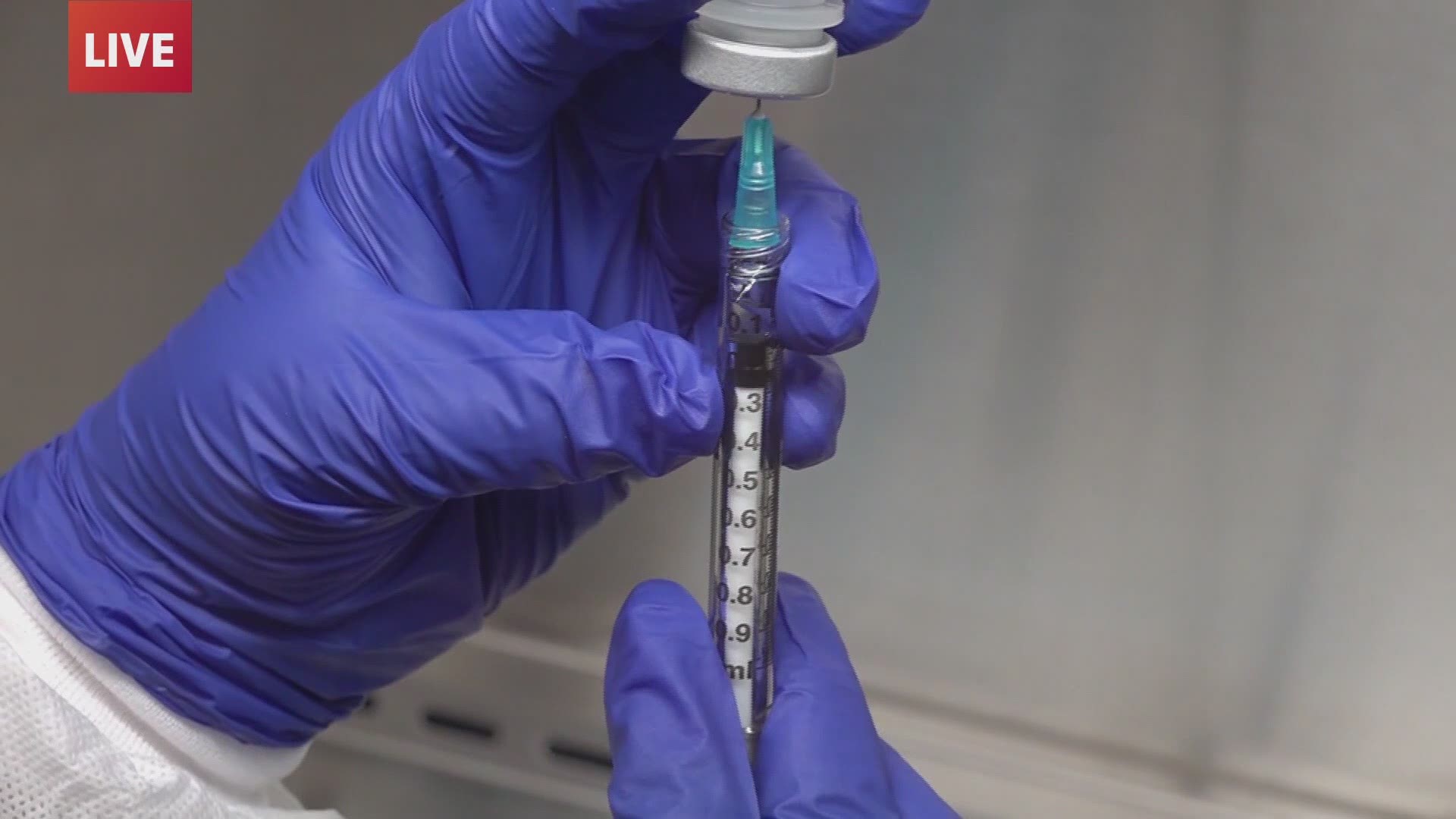 TENNESSEE, USA — The distribution of the COVID-19 vaccine in the United States is well underway.

Emergency approval for the Pfizer and Moderna vaccines were authorized in December. The single-shot Johnson & Johnson vaccine was approved at the end of February.

As the Tennessee Dept. of Health receives shipments, it allocates them to county health departments, hospitals, and pharmacy partners for distribution in local communities. At this point, the demand for the vaccine is outpacing the supply, but officials expect that to improve with time.

Starting Monday, March 8, Tennessee will transition to the phase 1c -- which includes people 16+ with high-risk comorbidities such as diabetes and obesity, pregnant women, and caretakers of medically frail children. People in these groups will be able to schedule appointments alongside others in previous phases and those 65 and older.

Also eligible for the vaccine are people in earlier phases, including healthcare workers and first responders.

RELATED: When will I be eligible for the COVID-19 vaccine in Tennessee?

RELATED: What it's like to be part of a COVID-19 vaccine trial

Here's how the state will distribute the vaccine:

1a1: Healthcare workers who have the most direct exposure to patients are first priority of the vaccine, along with residents and workers in long-term care facilities. People above 18 who are unable to live independently and first responders with direct exposure will also be among the first to receive the vaccine. The state estimates the first portion of phase one will involve about 450,000 people.

1a2: Another 100,000 healthcare workers will follow in the second portion of phase one, including pharmacists and staff, patient transporters, dentists, urgent care employees, mental health providers, etc. Mortuary workers will be included in this phase.

The vaccine has been made available to anyone who is 70 years old or older -- but availability will still be dependent on current supply of the vaccine and demand for it. This would include roughly 448,000 people.

1b: Educators were moved up in risk priority in the latest version of the vaccine distribution plan. All K-12 school and childcare teachers and staff, including bus drivers, as well as first responder administration workers, will be allowed access to the vaccine. The state estimates this will involve about 150,000 people.

People 65 years old or older will also be given access to the vaccine once this phase begins, which includes roughly 1.1 million people.

1c: People age 16 and over with two or more high-risk conditions will round out phase one. Those conditions include: cancer, chronic renal disease, lung conditions, organ transplant, obesity, heart failure, diabetes, dementia, liver disease and more.

Pregnant women will also be included due to being more at-risk to the virus, though TDH cautions the COVID-19 vaccine currently in circulation have not finished clinical trials for expecting mothers. If you are pregnant, you should consult with your healthcare provider to make an informed decision on if you should receive the vaccine.

This phase began on March 8. The state estimates the final distribution in phase one will involve about 650,000 people, excluding age-based vaccines.

Health officials removed the medication requirement for people with a diabetes diagnosis to get the vaccine.

Household contacts of pregnant women were also formally added to the eligibility list.

People with Down Syndrome were also added to the list.

2a/b: Phase two will begin when phase one is complete and the state has access to the needed vaccines. Currently, this phase is set to begin sometime in the second quarter of 2021 (April/May/June).

Sometime during this phase after a significant percentage of people 65 and up have received vaccines or turned them down, the state will provide access to the vaccine for people 55 and older -- which would include roughly 2 million people.

The third and final risk-based phase will begin when phase two is complete and the state has access to the needed vaccines.

The timeframe for this phase to begin is later than first expected -- because as of December 30 the shipment of some 11 million doses of vaccines total across the U.S. was far behind the 100 million doses contracted to be distributed by the end of the year as part of Operation Warp Speed. Of the doses shipped, roughly 2.1 million had been given to people.

Phase three has been changed to focus primarily on grocery workers, people in congregate living and people in correctional facilities.

The state estimates that to be about 2 million people.

Everyone else not included in the phases above will receive the vaccine based on their age group, focusing first on those who are older and inherently more at risk to serious complications to the virus.

Once people 55 years and up have had a chance to receive the vaccine in Q2, the next priority will be the roughly 2.9 million people 45 years and up. It's currently estimated they will be able to receive a vaccine sometime during phase three in the second or third quarter of 2021 (April - September).

Next will be people 35 years and older, who make up about 3.7 million people. They also are expected to receive a vaccine sometime between April and September after people 45 and up have been given appropriate access.

The youngest 10 million+ Tennesseans the vaccine is approved for, people 25+ and people 16+, will be the last to have access to it. It's currently estimated they may not have access until the last two quarters of the year between July and December.

These estimated time frames could change depending on how quickly the vaccine is distributed in 2021.

How will the vaccine be distributed?

The hospitals will take care of vaccinating staff members in phase one. It has also partnered with CVS and Walgreens to distribute vaccines in long-term care facilities.

Some county health departments are planning to hold vaccination clinics. You should follow updates from your local health department to find out when those are held and which groups will be allowed to receive a vaccine at that time.

Otherwise, hospitals and pharmacies are expected to handle the bulk of administering vaccinations for the majority of the population when they are made widely available.

Tennessee is in the process of onboarding 1,131 volunteer vaccine providers, located across the state’s 95 counties, including pharmacies. Every county has at least one provider among this initial priority group of organizations.

The National Guard, which has already been conducting COVID-19 testing events across the state, will also likely be involved in its distribution.

More information is expected to be released in the coming weeks.

The Pfizer and Moderna vaccines both need to be administered in two shots, several weeks apart. In addition, the vaccines have to be stored at ultra-cold temperatures. For that reason, state officials said it would be easier to bring people to vaccine distribution points, instead of delivering it directly to the population.

You can read Tennessee's full distribution plan here. This story will be updated as we get more details.