Coronavirus vaccine could be ready as soon as early 2021, Health and Human Services director says

During an exclusive interview with WCNC Charlotte, Azar said a COVID-19 vaccine is on the way, as well as millions of coronavirus test kits. 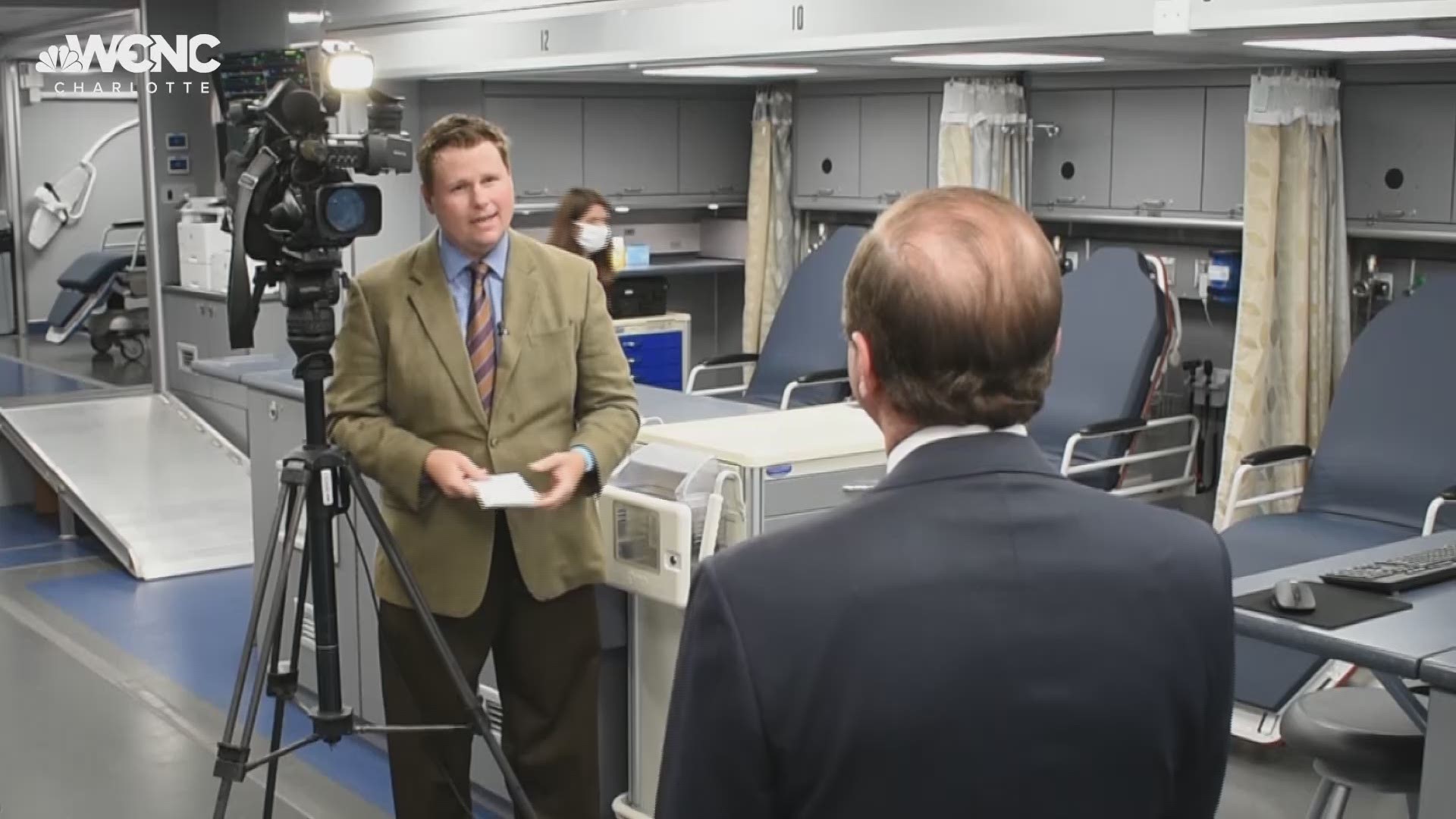 Part of the secretary's visit to the Charlotte area included a roundtable discussion with state and local health officials to learn more about their needs, and to take a tour of MED-1, which is part of Atrium's COVID-Safe effort. MED-1 will provide a secondary treatment area during this week's NASCAR races, allowing staff to identify and isolate potential coronavirus cases. Everyone who enters Charlotte Motor Speedway grounds will receive a screening.

Secrtary Azar took time to speak exclusively with WCNC Charlotte on how North Carolina's decision to begin Phase 2 can be done safely.

"Thanks to President Trump's historic response on the coronavirus we're now able to have states with flexibility to do reopening. We've got the testing in place, we've got the surveillance in place, we have the containment procedures in place with the public health workers who can identify cases and contact trace, and now it's up to state governors," Azar said.

Azar also noted more work needs to be done to bring down the infection rates for all people across the Carolinas. Mecklenburg County reports the infection rate among the African American and Latino communities is too high for the percentage of population share.

"We are obviously extremely concerned as we see infection rates as well as the severity of impact in minority communities, so the CDC and NIH are doing many studies and are trying to get to the bottom of why we are seeing that and what interventions we need done. Atrium, for instance, has a mobile testing unit that they've deployed into underserved communities. The Atrium CEO was informing me they've actually been able to get the testing rates in those communities to the equivalent to non-underserved communities," Azar explained.

He said there have been 12 million COVID-19 tests conducted so far this year in the U.S. with plans for 12 million more in the coming weeks. North Carolina reported that 13,500 tests were conducted Wednesday.

RELATED: AstraZeneca gets $1 billion from US to make Oxford coronavirus vaccine

Experts say life won't truly return to normal without a vaccine, which Azar says is on the way.

"We have done a deal with AstraZeneca, one of the largest pharmaceutical companies, they have a vaccine which is a Oxford-Jenner Vaccine to deliver as soon as this fall with 300 million doses by early next year."

NBC News reports the vaccine has shown promise in animals creating the necessary antibodies to fight off infection. The new vaccine is now being dispensed in humans with the world watching. AstraZeneca tells NBC News if the vaccine is successful the cost with be just a few bucks for a dose.

The Joe Biden for President campaign was not impressed with the Secretary's visit. The campaign issued this statement in regards to Secretary Azar's visit to the Track:

“North Carolina’s front line workers don’t want a photo-op with Secretary Azar. They want the White House to treat the present crisis with the seriousness it has deserved all along and to stop laying blame on everyone else. Unfortunately, Secretary Azar is one of the original architects of the White House’s botched crisis response and no photo-op will change his failure to protect North Carolina families. This fall, North Carolinians will have the opportunity to vote for change and we look forward to the opportunity to earn their vote every day until election day.”