Former Southeastern Conference commissioner Mike Slive, who led the league to unprecedented success both on and off the field and managed its growth from a regi... 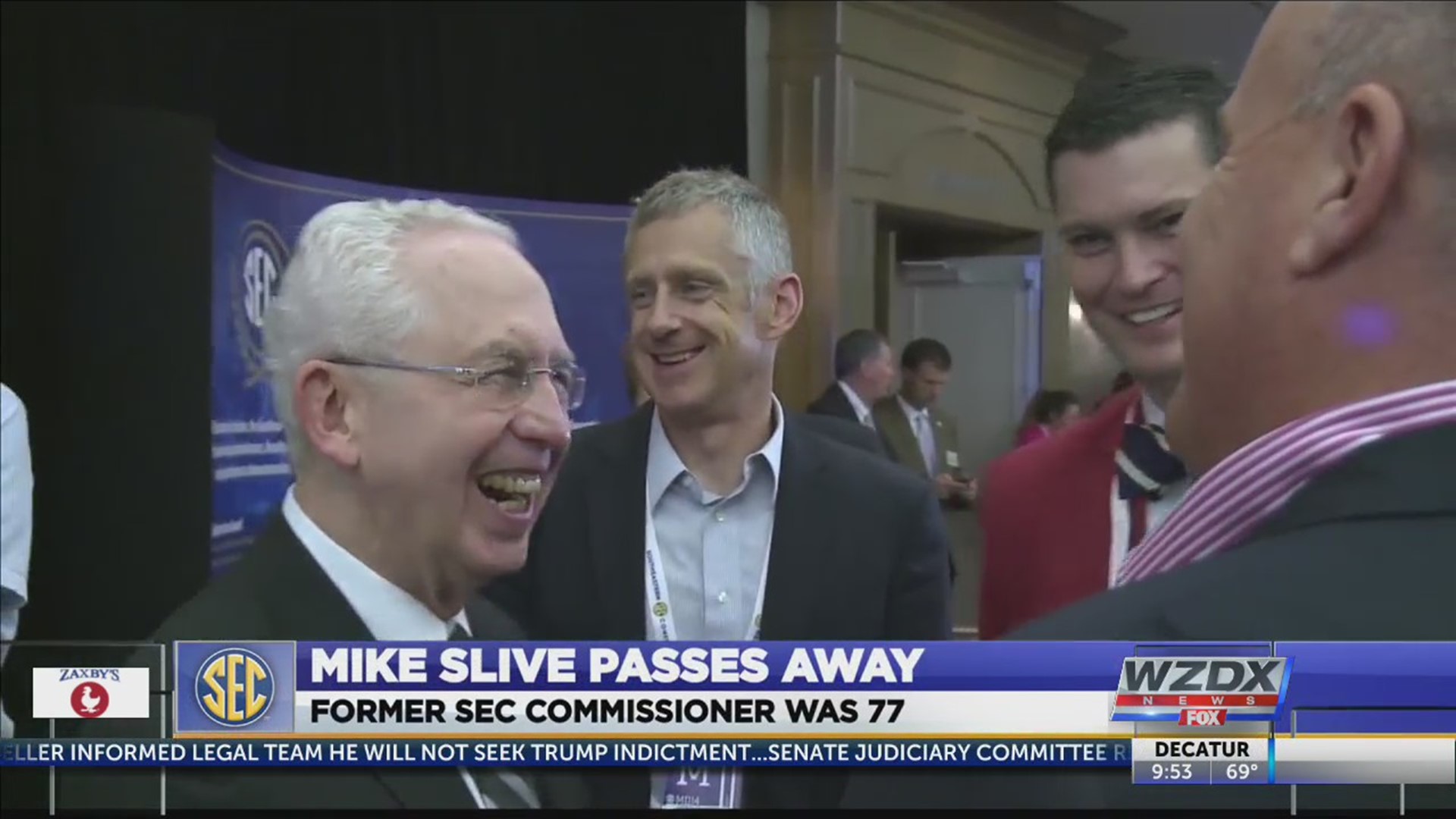 Former Southeastern Conference commissioner Mike Slive, who led the league to unprecedented success both on and off the field and managed its growth from a regional conference to national giant during his 13-year tenure, died Wednesday after a lengthy illness.

Slive, 77, announced he was beginning treatment for a recurrence of prostate cancer shortly before he retired as SEC commissioner in July 2015. He said he’d been first diagnosed with the disease in the late 1990s. He had been working as a consultant to the SEC since his retirement.

Under Slive’s watch, SEC football teams won an unprecedented seven consecutive Bowl Championship Series national titles from 2006 to 2012, the league’s footprint was expanded by adding new members Missouri and Texas A&M through expansion in 2012, and it became the richest conference in college sports by launching the SEC Network two years later.

In a statement released Wednesday, the SEC said that “Slive oversaw a remarkable era of success in the SEC while helping shape the landscape of college sports as a national leader in college sports.”

In 2002, the thought of somebody from the Northeast running the SEC seemed akin to the Vatican naming a Protestant pope. But Slive’s broad experience made him the ideal replacement for the retiring Roy Kramer, and his vision transformed the SEC into a national powerhouse.

“He was a real visionary, and I don’t think any of us will ever forget the impact he had nationally on the sport,” former Florida president Bernie Machen told ESPN shortly before Slive’s retirement in 2015.

Slive will be remembered for overseeing what is considered the golden age in SEC athletics. Starting with the Florida Gators in 2006, SEC teams won seven consecutive national titles until the Florida State Seminoles ended the streak in 2013.

“That won’t be broken in your lifetime, my lifetime or anybody’s lifetime,” Slive told ESPN in 2015. “I tell people that I never say never, but that’s a never.”

live’s influence in the SEC was felt as much off the playing field as on it. When Slive was named the SEC’s seventh commissioner in July 2002, nine of its schools were either on NCAA probation or under investigation. Slive vowed to have every one of the league’s schools off probation within five years.

He began repairing the SEC’s reputation as a rogue league by persuading school presidents and athletics directors to hold their coaches more accountable for rules violations, implementing educational reforms and setting up compliance workshops.

When Slive was picked to replace Kramer, none of the 12 SEC schools had ever had an African-American football coach. Mississippi State hired the first one, Sylvester Croom, in 2003, and four more would be hired during Slive’s tenure: James Franklin (Vanderbilt), Derek Mason (Vanderbilt), Joker Phillips (Kentucky) and Kevin Sumlin (Texas A&M).

In August 2008, the SEC signed a 15-year deal with ESPN worth more than $2 billion to televise its sporting events, which was the longest contract ESPN had ever signed. Six years later, ESPN launched the SEC Network in 65 million homes, which ESPN called the most successful cable launch in history. After only one year, the SEC Network had a market value of $4.77 billion, according to the research firm SNL Kagan.

Slive, the son of a butcher from Utica, New York, was instilled with a work ethic that led him to Dartmouth and later earned him a law degree at Virginia and a Master of Laws at Georgetown. He was an assistant AD at Dartmouth for two years but felt he was wasting his law degrees and began practicing in New Hampshire.

Ultimately, the pull of college athletics was too strong. During the early 1980s, he was an assistant commissioner in the Pac-10, then the AD at Cornell. By the mid-1980s he was back in law, this time representing schools facing NCAA sanctions. In 1991, Slive became commissioner of the newly created Great Midwest Conference, and then four years later he ran its successor, Conference USA.

A memorial will be held at 11:30 a.m. ET Friday at Temple Emanu-El in Birmingham, Alabama, the SEC said.