He was being placed under arrest for DUI when things escalated and he was later shot by an Atlanta Police officer. 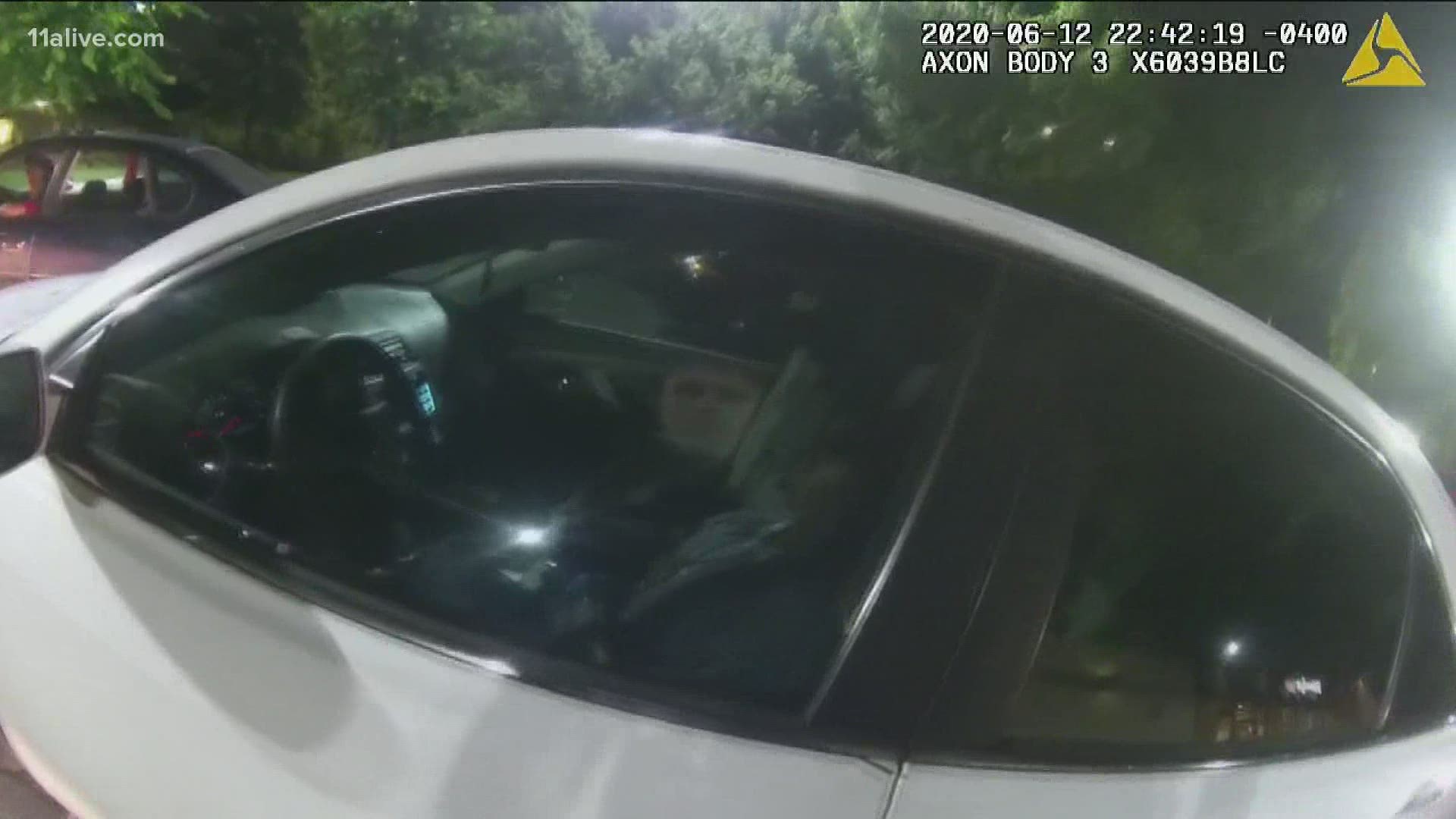 ATLANTA — It was Friday night at around 10:30 p.m. when Atlanta police were called to a Wendy's fast-food restaurant off University Avenue to reports of a man sleeping in his car in the drive-thru line.

The initial interaction between the responding officers and the subject, now identified as Rayshard Brooks, was a cordial one. Things escalated and Brooks was shot and later died.

Since that time, there have been protests, major changes within the city and the termination of one of the officers involved.

Here's what we know about the events leading to and following the death of Rayhshard Brooks.

• The interaction between Brooks and the responding police officers is all captured on a lengthy bodycam and dashcam video released by the Atlanta Police Department just 24 hours after the incident. It shows a pretty standard response to a DUI call, which includes field sobriety tests.

• The officers, now identified as Officer Devin Brosnan and Officer Garrett Rolfe attempt to arrest Brooks when a struggle begins. The officers attempt to use a stun gun on Brooks, but Brooks is able to retrieve that Taser and get away.

RELATED: Officer fired, another on administrative leave after deadly shooting of Rayshard Brooks

• In surveillance video from Wendy's released by the Georgia Bureau of Investigation (GBI), Brooks is seen running from the officers. He turns around and appears to point the Taser at the officers when Officer Rolfe pulls his service weapon and fires three shots at Brooks. Brooks is transported to Grady Hospital and eventually dies in emergency surgery.

• In a time when the country and the City of Atlanta is already angered by police brutality and the deaths of unarmed black people, including the death of George Floyd in Minneapolis, several protests had been ongoing in the city for weeks. A peaceful crowd began to gather at the Wendy's on Friday night after word gets out of Brooks' death.

• Those crowds grew on Saturday where thousands of protesters demanded change and justice. As night fell, protesters blocked the downtown connector for more than an hour, stopping traffic across 14 lanes of the interstate. A fire also started at the Wendy's and it was left completely gutted. Police say 36 arrests were made on Saturday.

RELATED: Wendy's where man was fatally shot by police goes up in flames

• Atlanta Police released photos of a woman suspected in connection with starting the fire that led to gutting the Wendy's restaurant on University Avenue in southwest Atlanta on Saturday night. A $10,000 reward is being offered by Crime Stoppers of Greater Atlanta for information leading to the arrest and indictment of those responsible for starting the fire.

• The protests continued on Sunday and remained peaceful.

1 / 18
AP
A person looks back as officials move closer during protests Saturday, June 13, 2020, near the Atlanta Wendy's where Rayshard Brooks was shot and killed by police Friday evening following a struggle in the restaurant's drive-thru line in Atlanta. (AP Photo/Brynn Anderson)

The investigation and changes

• In a news conference on Saturday afternoon, GBI director Vic Reynolds urged the public and the media to be patient during the investigation. His department released the surveillance video that afternoon and promised a thorough investigation.

• Also on Saturday afternoon, Atlanta Mayor Keisha Lance Bottoms announced during a press conference that she is calling for the termination of the officer who pulled the trigger in the case. That same night, Atlanta police announced Officer Rolfe had been fired.

RELATED: Atlanta police chief stepping down, mayor calls for officer in Atlanta shooting to be fired

• Mayor Bottoms announced that Atlanta Police Chief Erika Shields would be resigning as chief, but would remain with the city in a capacity to be determined. Rodney Bryant, who has been involved in law enforcement since June 1988, when he joined the Atlanta Police Department as a police officer, was named interim chief.

• On Saturday, Fulton County District Attorney Paul Howard said that his office has already launched its own independent investigation of the shooting incident. He said his office was on the scene shortly after the shooting, and that they have been in investigative sessions in order to identify all of the facts and circumstances surrounding the incident.

• On Sunday, the Fulton County Medical Examiner's Office said the cause of death was two gunshot wounds to the back that caused organ injuries and blood loss. The manner of death has been confirmed to be homicide - or the death of one person caused by another.

11Alive News will continue to bring you developing updates as they happen in the case of Rayshard Brooks. You can also download the FREE 11Alive app now in the iTunes store or on Google Play to follow any breaking news. Make sure to enable push alerts.