Collins, who represents parts of far north Georgia, says Fulton County DA Paul Howard should not have issued charges before the GBI investigation was complete. 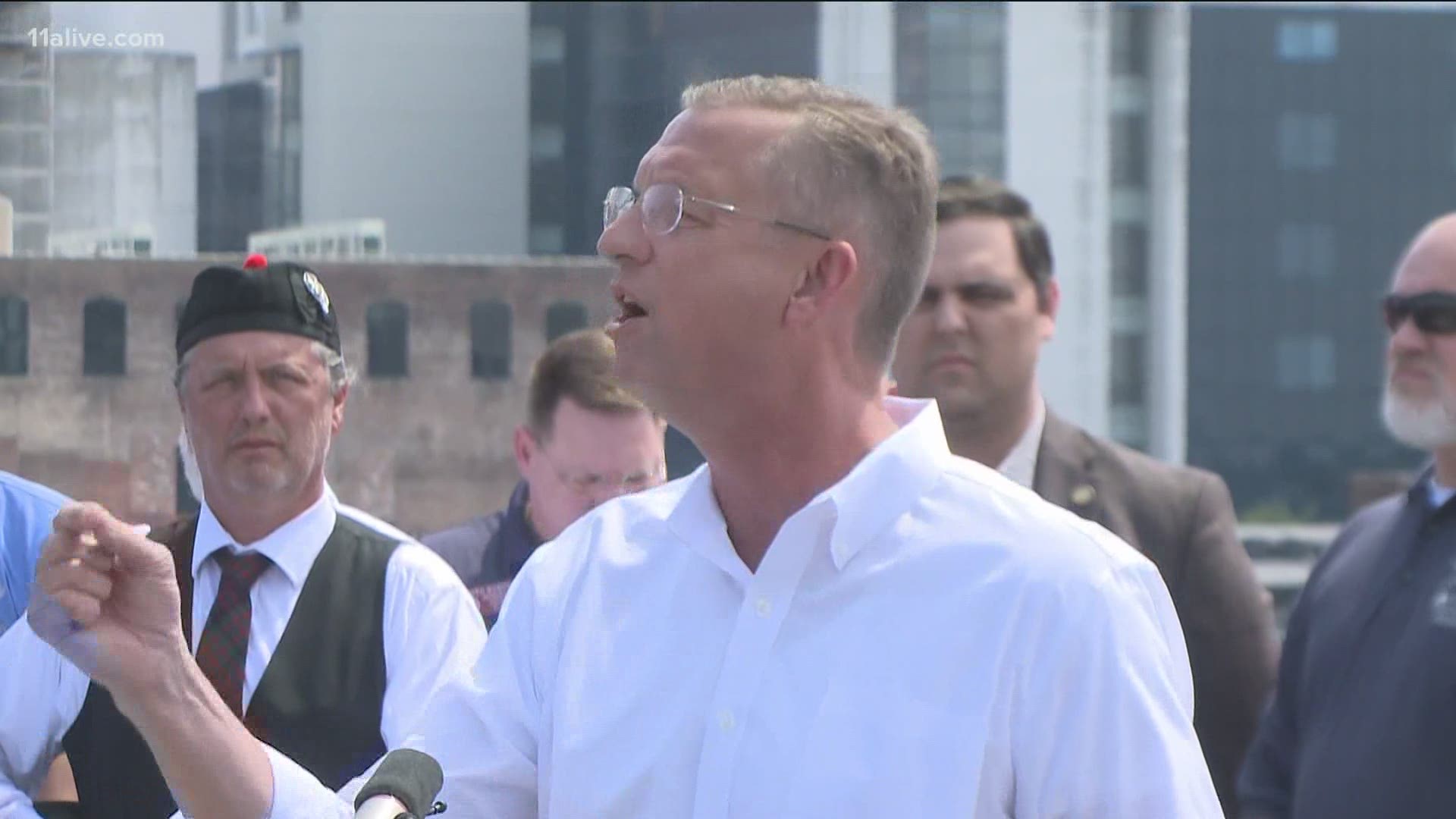 ATLANTA — US Rep. Doug Collins (R-Ga.) has thrown his support behind the Atlanta Police Union in its conflict with the city's mayor and Fulton County's district attorney.

Early Sunday afternoon, Collins renewed his call for the appointment of a special prosecutor in the Rayshard Brooks case. Collins is running against U.S. Sen. Kelly Loeffler in the special election for the Senate seat vacated by the retirement of Johnny Isakson at the beginning of 2020.

"You cannot prosecute cases until the investigation is over. You don't do it for politics. Your job is to find justice for everyone. Not race, not class, not anything else," Collins said.

Collins was joined by members of the Atlanta Police Union and the Georgia General Assembly at a hastily-called news conference to denounce the charges brought by Fulton County District Attorney Paul Howard.

"We do the job to protect. We expect to be protected by our leaders and they've all failed us. All of them, so I appreciate all of you guys being here," said one officer at the press conference.

Brooks was shot and killed during a confrontation with Officer Devin Brosnan and Officer Garrett Rolfe in the parking lot of the restaurant on University Avenue in southeast Atlanta.

The interaction between Brooks and the officers began as a DUI call when the officers responded to a report of a man sleeping in a car in the drive-thru line.

The interaction between Brooks and the two officers initially appeared to be a standard response to a DUI call, which included field sobriety tests.

RELATED: What is the 'Blue Flu' and did Atlanta Police walk out?

In surveillance video from the Wendy's and released by the Georgia Bureau of Investigation, Brooks could be seen running from the officers. At one point, Brooks turned and appeared to point the Taser at the officers. Officer Rolfe pulled his service weapon and fired three shots at Brooks.

Brooks was transported to Grady Memorial Hospital, where he died in emergency surgery.

RELATED: Rayshard Brooks dies after being shot by Atlanta Police at Wendy's drive-thru

The GBI was called in by the Atlanta Police Department to conduct an independent investigation, which is customary in officer-involved shooting cases.

On Saturday, June 13, Mayor Keisha Lance Bottoms called for the immediate termination of Rolfe and the suspension of Brosnan. Atlanta Police Chief Erika Shields tendered her resignation. Bottoms appointed Rodney Bryant as interim chief and announced a nationwide search for a replacement.

As of this point, the GBI's investigation has not yet concluded.

Howard said that the charges placed against Rolfe and Brosnan were based upon an independent investigation undertaken by his office.

In a release on Thursday, Collins accused Howard of overstepping his bounds at the expense of law enforcement, saying in part, "Charging an Atlanta police officer with felony murder before completion of the GBI's investigation was a political decision, not a legal one."

Collins justified his position by pointing to the Ahmaud Arbery case in Brunswick.

"If a special prosecutor was warranted in the Ahmaud Arbery case, then it certainly warrants the appointment of one here," Collins said.

Attorney General Chris Carr responded to Collins on Friday, citing Georgia law which does not permit him to appoint a special prosecutor in the case.

While APD deals with 'higher than usual number of call outs,' other agencies post they're hiring