Deborah Barnhart went from driving Navy ships across the open sea to now leading the biggest tourist attraction in the state of Alabama. 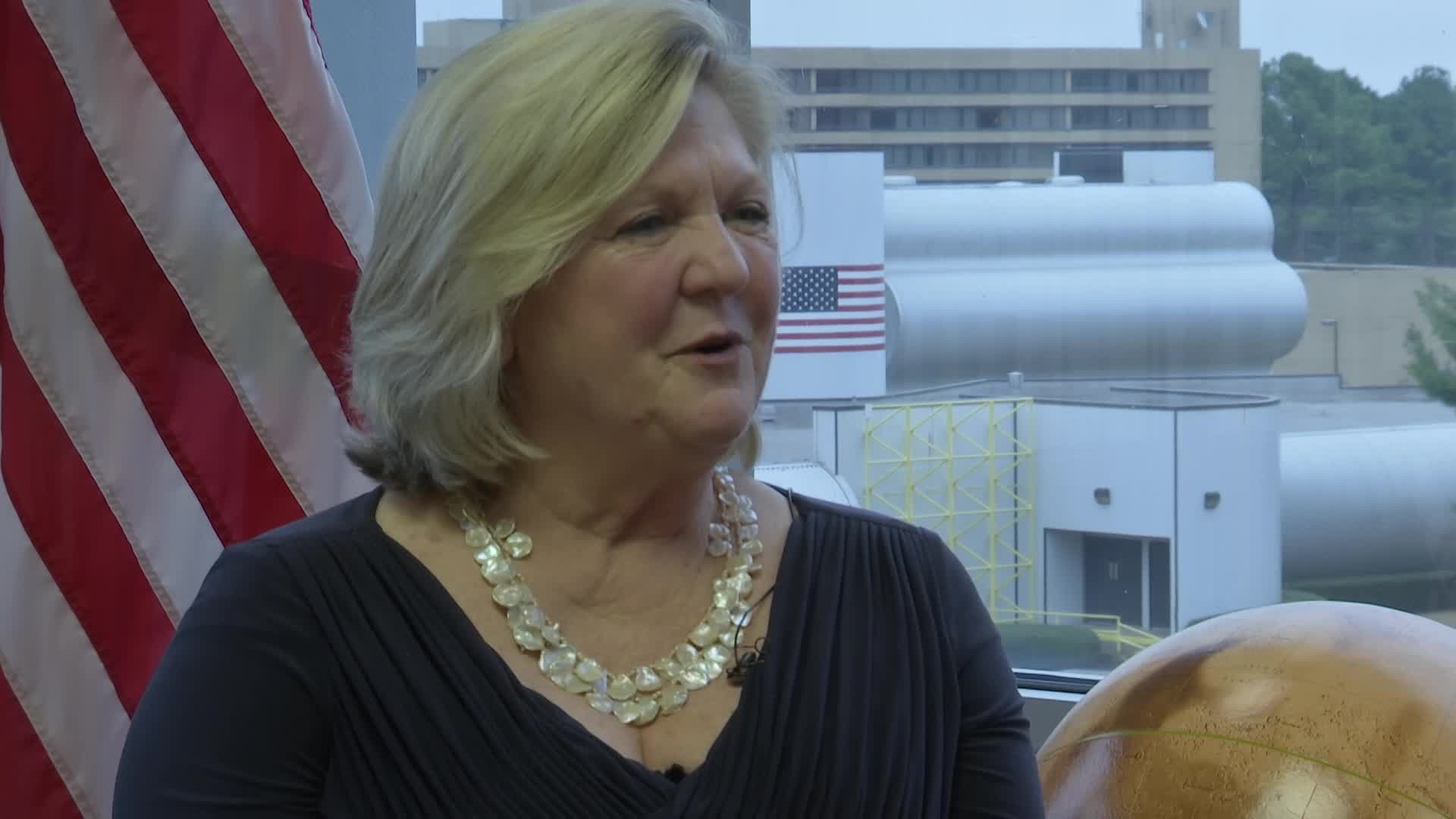 “Von Braun was my Valentine of choice that year,” laughs Dr. Deborah Barnhart as she shows us her piece of art she made with the engineer’s name engraved on it.

Doctor Deborah Barnhart not only has a love for Wernher Von Braun, but also a love for the arts, anything high-tech, and of course – rockets.

“I came here as a child in the late 1950’s and just grew up hearing the thunderous roar of the F1 engines being tested at Marshall Space Flight Center,” says Dr. Barnhart.

Doctor Barnhart is the CEO and Exectuve Director of the U.S. Space and Rocket Center. Running the biggest tourist attraction in Alabama takes a lot of work and a lot of passion.

“I like to talk about it as my aircraft carrier,” explains Barnhart. “It is a really big thing with a lot of moving parts.”

But her story starts back when her family moved from Oklahoma to Huntsville, Alabama when she was a child for her dad to take a job working for NASA as an engineer.

“So many of us in this area are second and third generation rocket babys, that I think we just have a natural propensity for all things technical,” says Dr. Barnhart of growing up as part of a NASA family in the Rocket City.

She has been the CEO of the Space and Rocket Center since 2011, but she has a long history with the center. She worked at the Rocket Center during her last year of college in 1973, then was asked to come back to work on public relations for the when the shuttle first came to Huntsville.

“The shuttle came in on the back of a 747,” remembers Barnhart.

And then she came back again in the late 1980’s to work as Director of Space Camp. She is passionate about what she does and loves seeing the impact it has on the Rocket City and across the world.

“No matter where I am on the planet, literally Azerbaijan, China, Shanghai, I hear a story about how someone came to Space Camp and it changed their life. So, it is really good work,” shares Dr. Barnhart.

“These were two of my ships, destroyer tenders. USS Yellowstone and USS Acadia,” says Deborah Barnhart as she shows us pictures of the ships.

“I became one of the first seven women selected to go to service onboard ships,” says Dr. Barnhart. “At that time they were noncombatent units and vessels. So I am to a United States Naval Vessel as a pilot is to an aircraft. I am qualified to fight and drive Navy ships.”

Doctor Barnhart has driven ships up to the Panama Canal and under the Golden Gate Bridge. She also worked for 20 years in aerospace and defense on the corporate side. Although her accomplishments have been groundbreaking for women, and she is no doubt an inspiration to many, she says she does not see herself as a trailblazer.

“I never think of myself that way. When I look back I see the nurses in World War II, and even in the Civil War,” explains Dr. Barnhart. “And I see those women who flew the planes that drug the targets behind them and guys are shooting at them. I think those people are pathfinders.”

Another topic she is very humble about is receiving the NASA Distinguished Public Service Award a few years ago. That is the highest award offfered to a civilian, outside of the federal government, for supporting NASA.

“I felt like I didn’t deserve it, so I am trying to earn it these days,” says Deborah Barnhart.

Sitting down with Doctor Barnhart it is easy to see that she deeply cares about what she does. She says passion is part of mission.

“Be sure that you are working at something that means something to you and that you are going to be proud of at the end of the day,” Barnhart says when asked what advice she would give people who are chasing a dream.

Although Dr. Barnhart thinks we have not come as far as we should have at this point, she says right now young women have a world of opportunities at their fingertips.