'My heart noticed': Tennessee couple gets married where they met in Smokies

"I joined a 'little' group called Hike the Smokies and through this wonderful hiking community, I found everything." 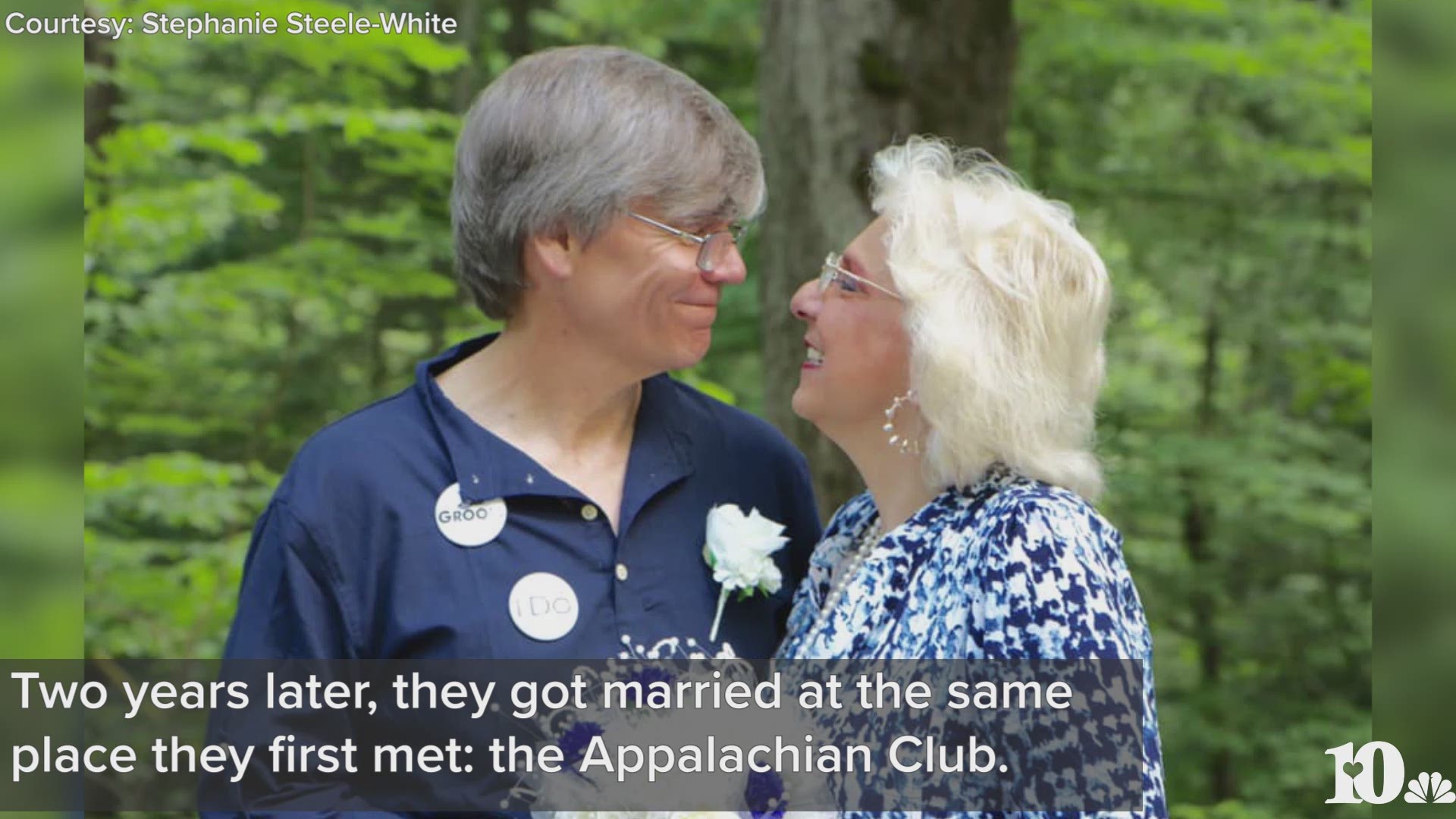 GATLINBURG, Tenn. — When Stephanie Steele-White joined the "Hike the Smokies" Facebook community in 2017, she had no idea how much it would change her life.

Stephanie admits she is a "VERY slow hiker" due to some physical limitations, and she has to have someone carry her hydration and help her with steep, rocky areas. But she loves the community, and she is able to do many trails thanks to her "Hiking Wife" Pam, a friend she met through Hike the Smokies.

On June 26, 2017, Pam invited Stephanie on a hike, which took about five hours. Stephanie said a runner passed them around the two-hour mark and then again at four hours.

"To my surprise, he stopped. He said he recognized us from HTS and felt compelled to stop and say hello," Stephanie said.

Photos: TN couple gets married at same Smokies spot where they met

The runner, a man named Butch White, said he read Stephanie's posts, loved her photos and liked her sense of humor.

"The encounter was only about a minute long but my heart noticed," Stephanie said.

In the coming months, fate intervened again and again as Stephanie and Butch kept running into each other in Cades Cove.

"My heart again noticed even though I kept quiet," Stephanie said.

Stephanie persuaded Pam to go as her wingman to see if "he" was going to be there.

When they arrived, Stephanie spotted Butch standing on the porch of the Appalachian Club.

"With every ounce of courage I had, I calmly walked up to him smiling, gave him a big hug and said, 'Hi Butch, it is good to see you,'" Stephanie said.

They stayed on that porch for hours talking.

Credit: Stephanie Steele-White
Butch and Stephanie at the Hike the Smokies Meet and Greet where they first met.

"I was never a believer of love at first sight, but by the end of that day, I realized for the first time in my life I found something that I’ve never felt before, I found home, my other half, or as some people call it- my soul mate," Stephanie said.

The couple has been together ever since.

Flash forward nearly two years since they met to May 5, when Butch abruptly got down on one knee and told Stephanie he had been waiting for a long time to propose.

"He was looking for that one perfect moment when he realized most all of our moments that we share together are perfect and it would be impossible to pick just one," Stephanie said.

They only told their most inner circle as they planned to elope with Stephanie's children and Butch's mother as witnesses with a mutual friend performing the ceremony. Their wedding bands were custom made to represent the place they met.

"The only place we ever considered for the ceremony was the exact spot where all that magic happened, the porch of the Appalachian Club," Stephanie said.

Butch and Stephanie got married on May 31 and spent their honeymoon hiking in Cataloochee.

"I joined a 'little' group called Hike the Smokies and through this wonderful hiking community, I found everything," Stephanie said. "I found a soulmate, best friends, hiking partners, an adopted granddaughter and even a hiking wife. Hike the Smokies has totally changed my life."