Research found that more than 70% of assets named in D.C. are named for white men, many of whom were not District residents. 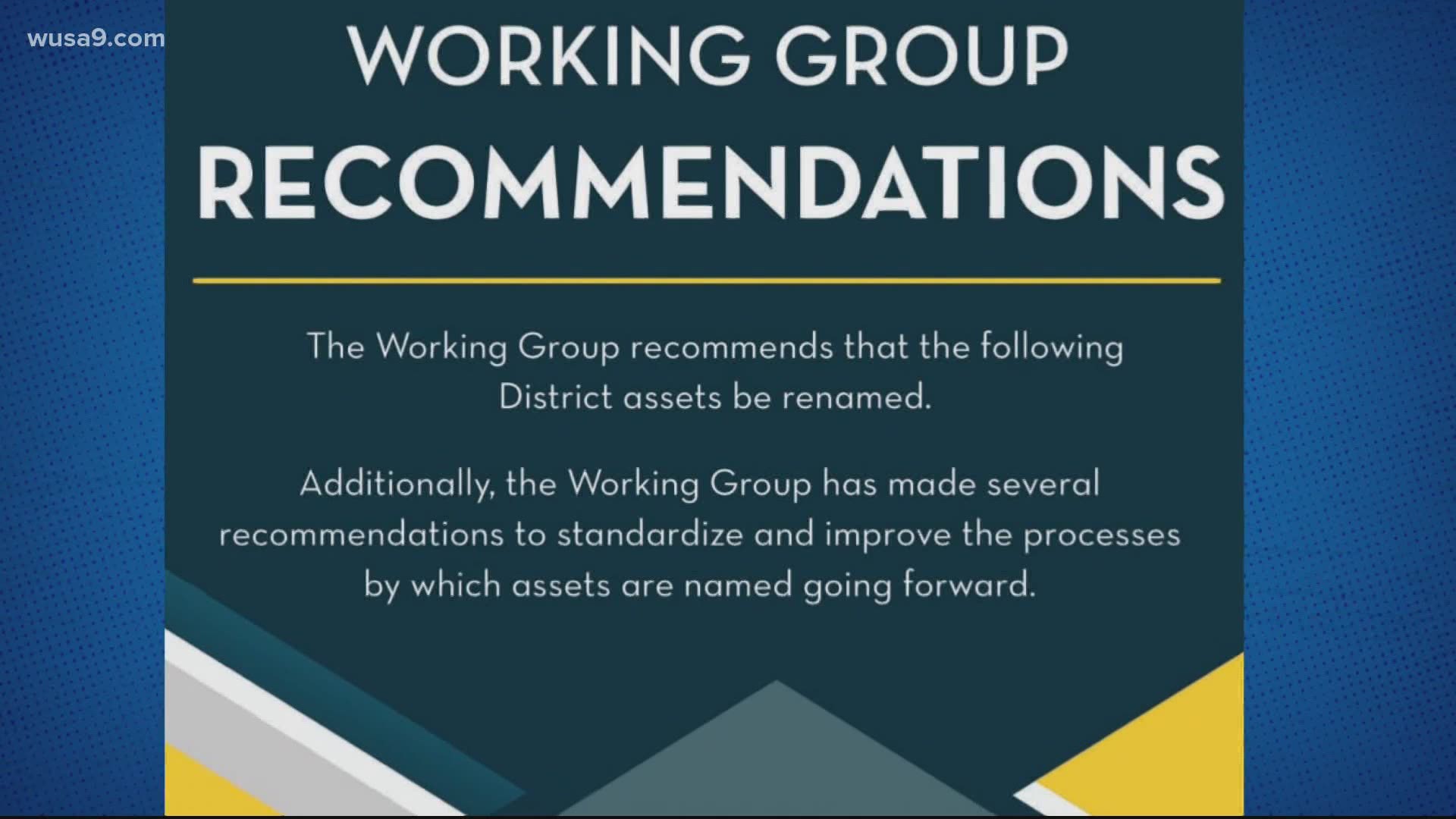 In total, 21 public schools, nine residential buildings and campuses, 12 parks, fields and playgrounds and seven government buildings are being considered for renaming or further contextualization.

A previous version of the report included eight statues and monuments, such as the Washington Monument and Jefferson Memorial, that have since been removed.

"Mayor Bowser has asked the DCFACES Working Group to clarify and refine their recommendations to focus on local D.C., so no one attempts to confuse the Working Group’s focus on contextualizing not removing important monuments and memorials in D.C.," LaToya Foster, a spokesperson for Bowser, said.

RELATED: DC Mayor on statues: 'We need to have a reasonable conversation... not have a mob decide that they want to pull it down'

The DCFACES Working Group evaluated all properties based on five "disqualifying histories" including:

"No matter your race, your faith, your sexual orientation, your gender identity, your background — you should be able to live, work and play in Washington, D.C. without fear of violence or discrimination," Bowser said.

An online survey completed by more than 2,300 D.C. residents, and the poll results of 275 town hall attendees, found that 81% of those asked believed D.C. should make changes to public spaces or commemorative works that don't align with the District's core values.

Not on my watch. Never going to happen. https://t.co/WdSQx3ZCes pic.twitter.com/xHKekThBAA

The Working Group’s research revealed that more than 70% of assets named in the District of Columbia are named for white men, many of whom were not District residents. The report recommended that in the renaming process, more women, people of color and LGBTQ Washingtonians are honored.

"In some instances, more research is necessary before a determination can be made," the Working Group's report said. "In all instances we believe strongly that all District of Columbia owned public spaces, facilities and commemorative works should only honor those individuals who exemplified those values such as equity, opportunity and diversity that DC residents hold dear."

The White House Office of the Press Secretary responded to the report Tuesday evening with a statement.

"President Donald J. Trump believes these places should be preserved, not torn down; respected, not hated; and passed on for generations to come," the statement said. "As long as President Trump is in the White House, the mayor’s irresponsible recommendations will go absolutely nowhere, and as the mayor of our Nation's capital city—a city that belongs to the American people—she ought to be ashamed for even suggesting them for consideration."

Secretary of the Interior David Bernhardt, whose agency oversees national parks, monuments, wildlife refuges and other public lands, also tweeted "not on my watch. Never going to happen," in response to the DCFACES suggested changes.

Wow >> War of words between @MayorBowser and @realDonaldTrump HEATS UP.

THESE ARE THE PROPERTIES BEING CONSIDERED FOR REMOVAL OR RENAMING:

RELATED: MAP: Statues, roads and buildings named for the Confederacy around D.C.