Six years after the shuttles retired, what’s next for NASA?

Right now, the six-hour ride to the space station on the Soyuz is the only way America can send astronauts into orbit. 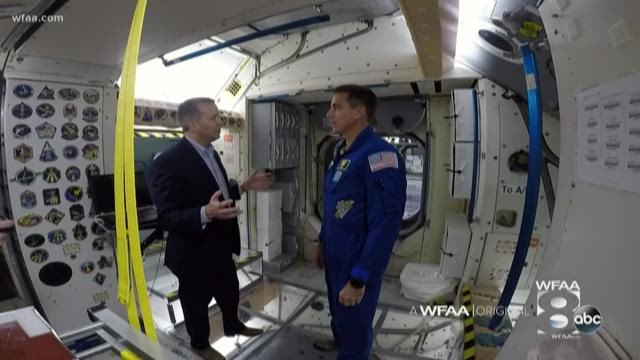 Before astronauts ever orbit Earth, Building 9 at the Johnson Space Center is a required stop.

"What we're standing in right now is a module about the diameter of a school bus, maybe a Greyhound bus,” said Capt. Chris Cassidy, a NASA astronaut who guided us through a full-size mock-up of the International Space Station. "We don't just use this facility for tours and TV interviews. This is our actual training environment."

Cassidy, 48, a former Navy SEAL, has spent about six months in space. "Two weeks on the shuttle and just shy of six months on my Soyuz missions,” he added.

Soyuz is the Russian spacecraft which the United States has been buying seats on ever since NASA retired the space shuttle six and a half years ago.

Right now, the six-hour ride to the space station on the Soyuz is the only way America can send astronauts into orbit.

"Plus, you're in the cockpit for three hours before launch so [it’s like] you're driving from Dallas to Houston in this and back without stopping at Buc-ee's," Cassidy continued.

But NASA is no longer making vehicles to go to the space station. Instead, private companies like Space X and Boeing have their own vehicles in development.

The Space X vehicle is called the Crew Dragon. The one Boeing is building is called the Starliner. Think Dreamliner, as well. It’s part of Boeing’s brand.

The Space X and Boeing vehicles are capsules, high-tech versions of the spacecraft used in the 1960s.

In August, Boeing scheduled the Starliner for an unmanned test flight. A crewed mission is currently planned for November.

The Starliner, which can sit atop several different rockets, can send up to seven people to the space station.

"It's also about time we get the public spark back interested in space,” added Dopart, 27. "I'm a space nerd. I've always loved space. I want to be an astronaut when I grow up. If I'm not an astronaut yet, I want to be working with them. I want to be building things that take them to space, and one day hopefully I get to ride on them. That's my end goal. I want to build a good product because I want to ride on it eventually."

Inside Building 9, there is a renewed sense of enthusiasm.

"2018 is going to be a huge year for us," said Steve Stich, NASA Commercial Crew Program. “The shuttle had a great purpose. It also was there to really build the space station. Once the space station was completed, what we really needed was a vehicle that could stay on the space station for a long time.”

Today, the space station is a growing platform for commercial research.

“A lot of drug companies are flying payloads up. There's lots of activity on the space station that really aren't NASA based,” Stich added.

But capsules, the new vehicle to get there, are not only tried and true. They’re also smaller and simpler than the shuttle.

While it would take three years to learn to fly the shuttle, it only takes about nine months to learn the Starliner, Boeing’s Dopart said.

As commercial firms plan flights to the space station in low-earth orbit, NASA is looking at missions farther out.

Orion is one of the next-generation projects that NASA is spending its time and money on. Like Boeing’s StarLiner, Orion is also a capsule.

NASA designed it to return to the moon, fly to Mars and even an asteroid. It can sustain four astronauts for three weeks.

"It's about the size, the volume of two minivans. It might be the worst camping trip ever or the best one depending on your point of view,” said Nujoud Merancy, NASA Orion Mission Planning and Analysis Lead smiling.

She and her team make sure everything works right with Orion from launch to landing in the ocean.

How hard does this hit the water?

"More amazing is how much we slow down. So, when we come back from the moon, we're going 25,000 miles per hour,” she explained. "And we hit the water gently at 20-miles per hour."

Climbing inside the Orion mock-up capsule, one immediately notices there are a lot fewer controls and switches. In fact, there’s only one panel with three screens and a couple dozen toggle switches.

"The computers we're using are the same ones they use on the Boeing 787 – radiation hardened for space,” said Merancy.

Orion has already had a successful test flight. In December 2019, Merancy said, NASA will hopefully launch a lunar mission "to test everything out." A crewed mission on Orion could come in 2021, she added.

Boeing’s Starliner can be reused up to ten times partly because its heat shield is jettisoned before touching down on land using a set of airbags as a cushion.

But Orion is not a reusable capsule since it lands in salt water.

Most importantly, these are the first new American vehicles to carry U.S. astronauts since the space shuttles retired in August 2011.

But building new spacecraft to bring more astronauts to the space station might present its own challenges, Cassidy said candidly.

"Quite truthfully that's only comfortable and manageable for finite periods of time,” he explained. "If you bring up more folks, you're putting sleeping bags in different nooks and crannies of the space station. We have one toilet on the U.S. side of the vehicle, which is right behind you and another toilet on the Russian side of the vehicle. In the morning, it can be quite a long line. That sounds funny, but we have to process and deal with the human waste, too.”

They are growing pains for what is once again a growing space program.