Children used to walk for miles to get to this little gray schoolhouse. Now, it sits on the side of Boyds Creek Highway, but the stories and lessons learned within its walls are kept alive by former students. 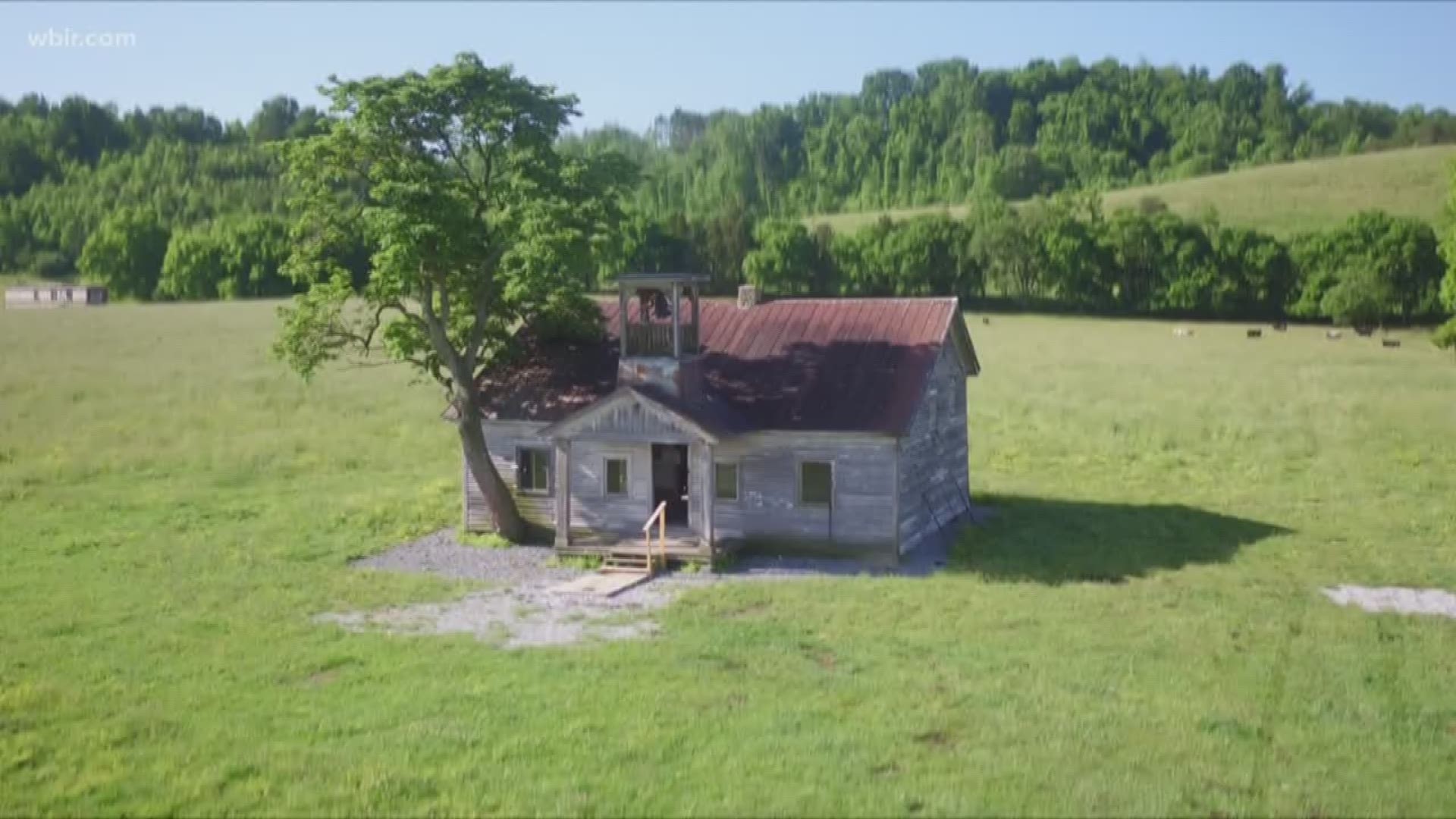 SEVIER COUNTY, Tenn — While single-room schoolhouses seem like something out of “Little House on the Prairie” or Western flicks today, they are still a reality in the memories of the men and women who went to the Island View School in Sevier County.

Dr. Sam Lyle’s family is forever linked to the history of the little gray schoolhouse on the side of Boyds Creek Highway.

Lyle’s grandfather donated two acres of his land to open the school in 1917 when the area’s original school was blown down in a storm.

Named after Buckingham Island, which is just over the “cattle hill” behind the school, teachers taught eight grades to 35-40 kids under one roof. On top of that, they were also principals and janitors.

Students would walk, ride a horse or go by wagon to school with some traveling three miles to and from school.

“If you were first or second grader having to walk or brave the weather even in a wagon, I would think it would be mighty cold,” Lyle said. “Most of the children had other chores to do, like milking cows, before they came to school.”

RELATED: Know of an abandoned place? Suggest a location

1 / 23
Elizabeth Sims
Children used to walk for miles to get to this little gray schoolhouse. Now, it sits on the side of Boyds Creek Highway, but the stories and lessons learned within its walls are kept alive by former students.

The schoolhouse also did not have air conditioning or heat. In the summer, they would open the windows and hope for a breeze. In the winter, the building was equipped with one potbelly stove at the center of the room that the teacher had to start before the lesson every day.

“The people close to it had to be hot and everyone else and the teacher had to be cold,” Lyle said.

Without modern plumbing, the students used outhouses behind the school, girls on the left side of the building and boys on the right.

“In the summertime, it was hot and stinky and in the winter time, it was cold and stinky,” said Ray Fain, who attended Island View in fourth grade.

Fain also remembers recess. The older kids would play baseball while the younger ones played with marbles or got creative.

“For recess, we brought a little tiny hook and a string and this whole thing here was full of crawfish holes and we caught crawfish,” Fain said.

With one teacher overseeing education, discipline and maintenance, some things could slip through the cracks or out windows.

“I can remember a boy who was in about the eighth grade, and the male teacher that taught four grades was gonna whoop him. Well, he dove out one of those back windows in there and run home and he never did come back to school,” said Wayne Morgan, who attended Island View in first and second grade.

Island View’s class size doubled when students were bused over from Boyds Creek School when it burned down.

According to Edward Guffey, whose father attended Island View, the teachers ran a wire down the center of the room and hung a tarp over it to separate the Island View and Boyds Creek classes.

“What it would be like to go to a one-room school, you can’t imagine, have to be quiet while the other kids had their lessons,” said Helen Manis, who moved from the Boyds Creek School to Island View.

When the Boyds Creek School was rebuilt in 1949, Island View closed for good. Though, according to Lyle, it served as a community center and storage area where people played ball in the yard and hosted spelling bees for a short time.

Eventually, the building was abandoned and left to the elements.

The back of building collapsed, the windows shattered, the front porch rotted and the bell tower support tumbled to the ground, leaving the bell tower held up by gravity alone.

The little gray schoolhouse sagged on the side of Boyds Creek Highway for years until Lyle noticed people parking along the fenceline in front of the school.

“I started seeing more and more people taking pictures from the road, and I guess I realized that there are people that still go back to 1900s,” Lyle said.

Lyle has been restoring the school for nearly 10 years and worked to preserve as much of the original schoolhouse as possible. Though cracked and chipped, the chalkboards still hang on the wood-slat walls with ghosts of writing still visible. Little wooden cubbies where students would store their lunches and hang their coats are still nailed to the wall just inside the front door. The hand-pumped well and drinking water trough outside still work.

The bell tower still stands tall, and though the bell is a replacement, it still rings when visitors pull the rope. Lyle’s grandfather sold the original bell to a church in New York for $10.

Lyle even has original student and teacher desks he brings out for special occasions. He also teams with the local genealogical library to host open house events so people can come back to school and learn a thing or two.

The community rallies around this little gray schoolhouse with former students or the children of former students coming back to share their own experiences and stories.

“Hopefully, we can maintain some of the history of the school and some of the hard work they had to do back in the horse and plow days,” Lyle said.

Reporter’s note: Though many of these buildings are unused and empty, they sit on private property that is still actively used in some cases. DO NOT attempt to unlawfully enter any of these places without permission. Many of them are structurally unsound and pose potential health hazards, like asbestos and lead paint. WBIR contacted all owners prior to visiting.

For more stories from Tennessee's Abandoned Places, check out our YouTube playlist: